The Buffalo Bills beat the San Diego Chargers 23-14 this past Sunday, but the game didn't completely turn Buffalo's way until linebacker Kawika Mitchell intercepted a pass by San Diego's Philip Rivers, thwarting a would-be go-ahead touchdown.  Mitchell's interception set up the field goal that iced the game for Buffalo as well.  Here's how it happened. 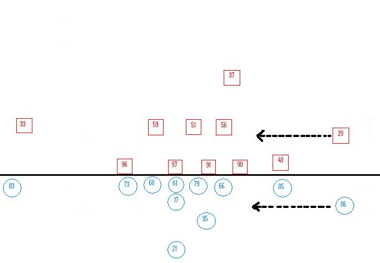 * This is a bread and butter play for San Diego.  The Chargers line up in an off-set I formation with Vincent Jackson (83) wide left, Antonio Gates (85) in the slot and Brandon Manumaleuna (86) out wide to the right.  The Bills counter with the defense they set aside for Gates.  Reserve safety Bryan Scott (43) lines up in man coverage across from Gates, while Jabari Greer (33) takes Jackson solo and Donte Whitner (20) lines up across from Manumaleuna.
* This play is designed to get single coverage on either Gates, Manumaleuna or LaDainian Tomlinson (21).  Prior to the snap, Manumaleuna motions inside of Gates with Whitner shadowing, meaning that the Gates/Scott matchup now takes place on the outside of the formation.  Clearly, the Chargers' main target on the play is going to be Gates.
* The key to the play for Buffalo here?  Buffalo's linebackers are playing zone underneath the man coverages of Greer, Scott and Whitner.  It's a mix designed to confuse Rivers, but only a terrific read by Mitchell makes the play work. 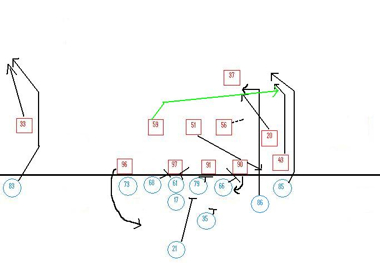 * Things actually fell into place for San Diego here.  The line does a good enough job on the Bills' defensive line, though Copeland Bryan (96) gets some good pressure on Rivers' blind side.  John McCargo (97) takes up the guard (Dielman) and center (Hardwick); Spencer Johnson (91) takes up Goff's attention, and Chris Kelsay (90) occupies Jeromey Clary.
* Paul Posluszny's action seals the play.  Playing in a zone, Posluszny comes up in front of Keith Ellison (56) as the two zone guys responsible for Tomlinson and fullback Mike Tolbert (35) out of the backfield.  Posluszny looks like a blitzer in the process, however; both Tolbert and Tomlinson stay in to max protect.
* Still, the coverages almost work for the Chargers.  Whitner follows Manumaleuna in man coverage into the end zone, where the bulky tight end is doubled by free safety George Wilson (37).  That effectively takes Wilson out of play in terms of coverage on Gates, who is now officially singled up with Scott - and he's got a lot of space in front of him for a score.  This is exactly what the Chargers wanted.
* Normally in this situation, Mitchell is stuck in no-man's land.  The Chargers run this play for a reason - it nearly always works.  Usually, as this play is developing, Mitchell drops back in a zone to "double" Jackson on the left side of the field with Greer.  As you may have heard, however, Buffalo expected the play - and they knew how to defend it when it inevitably showed up.

The Pick and The Aftermath

Mitchell recognizes the play and does what his coaches wanted him to do.  He crosses the field to double Gates; a shallow throw by the unsuspecting Rivers is easily intercepted by the Bills' weak side linebacker.  Game, set, match.

This was a great designed play by the Chargers that they used a bit too often in games leading up to this one.  This is why offensive quality control coaches exist - to eliminate defenders knowing what's coming.  San Diego's guys didn't do their jobs well enough; Mitchell and the Bills coaching staff were on this one like stink on cheese.

That's this week's Paint Analysis, folks.  More Film Analysis to come a bit later on today, but I'll only have some abbreviated thoughts in one post.  For now, enjoy reminiscing about Kawika's pick of Philip Rivers!