You know things are going poorly for your defense when a second-year wide receiver already widely labeled with the term "bust" nearly doubles his receiving yardage total on the season against your secondary.  That's exactly what Miami Dolphins wide receiver Ted Ginn did yesterday to the suddenly porous pass defense of the Buffalo Bills.  Ginn made several big plays on the day, and most of them came on similar types of play calls.

This one may have been Miami's most important.  The Bills had just driven down the field on the opening drive of the second half to take a 16-7 lead.  I know that I was comfortable at that point; I'm assuming many of you were as well.  One Ginn play, however, changed the entire complexion of the game... 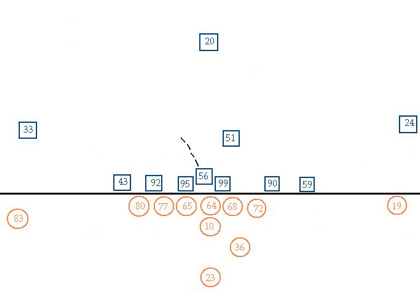 This is a pretty basic formation for the Dolphins, whose offense is coordinated by Dan Henning.  Henning's offenses are famous for being conservative.  That's exactly the look the Bills get here - Anthony Fasano (80) flanks the Dolphins' left tackle, and the Dolphins line up in an off-set I formation.  Ginn (19) is split wide right, lined up opposite the hobbled Terrence McGee (24); Greg Camarillo (83) draws Jabari Greer (33).

The Bills line up in their standard Cover 1 shell here (one safety deep).  Due to Miami's formation, strong safety Bryan Scott (43) and linebacker Kawika Mitchell (59) line up on the line of scrimmage, as this particular Dolphins formation is typically a running formation.  Keith Ellison (56) joins them near the line, feigning blitz, but drops back into zone prior to the snap of the ball. 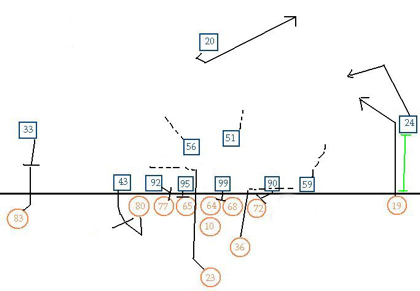 This looks like a running play from the start; the Bills, as a result, get caught peeking.  At the snap, Pennington immediately drops back, but there's a split second where all three of Buffalo's linebackers - Ellison, Mitchell and Paul Posluszny (51) - stand frozen in place, waiting for the run.  The fact that Mitchell is frozen here is the first part of what killed this play for the Bills.  That split second is all Miami needs.

Essentially, free safety Donte Whitner (20) is caught here - in a traditional setup, that is.  Greer plays Camarillo well, jamming him within 5 yards and effectively taking him out of the play.  Both of Miami's tight ends stay in along with fullback Lousaka Polite (36) to max protect; RB Ronnie Brown (23) sneaks through the line and flares left for a dump-off pass.  The pass is out so quickly that Scott, blitzing off of Pennington's blind side, barely has time to engage his blocker.

In normal circumstances, I believe this play goes left.  In normal circumstances, McGee isn't giving up such a huge cushion.  McGee tackled well yesterday, but his sprained knee limited his agility.  Leaving McGee on the field wasn't defensive coordinator Perry Fewell's mistake; matching him up on the speedy Ginn was.  McGee would have fared much better against the bigger, not-as-quick Camarillo.

Mitchell and Posluszny are slow dropping back into zone, and McGee's cushion makes Ginn's square-in route wide open from the moment the ball was snapped.  Pennington gets the ball out on rhythm (on a three-step drop), McGee misses a tackle, and Ginn is off to the races with Whitner, who inexplicably shaded to his right before crossing the field to pick up McGee's man.  64-yard gain.  Momentum immediately reverts to - and remains with - Miami.

These types of plays happen from time to time in the NFL.  Miami had a good formation that the surprised the Bills with, and it worked to their advantage on this particular play.  The issue, however, was that the Bills allowed receptions like this twice more in the second half, all while this was a one-score game either way.  The problem was that McGee was lined up on Ginn each time.  Miami max protected each time; the Bills were quicker to recognize, but the coaching staff simply didn't counter this Dolphins formation with anything resembling a defense that could slow the image down.

Again, don't blame McGee.  Considering the fact that his lateral movements rivaled my grandfather's yesterday (and both of them are in remarkable shape, considering their respective ages, FYI), he played pretty well.  The problem was that Fewell repeatedly lined him up across from Ginn, exactly the type of receiver that was going to give McGee problems yesterday.  Was this brilliance by Ginn or the Dolphins' offensive "genius", Henning?  Hardly.  They were just taking what Fewell's defense gave them.

Let that image of Ginn sink in.  Let it irritate you to no end.  It should.  Buffalo's coaching staff got smacked around by Bill Parcells' minions yesterday.  It's embarrassing.  It can't happen again.  Let that image of Ginn - who, here in a few weeks, likely will re-assume his label of "bust" - stand as a symbol of yesterday's coaching mediocrity.  Change it, Perry.  Lots needs to change before Laveranues Coles comes to Buffalo this Sunday.