Share All sharing options for: Paint Analysis: the play that concussed Trent Edwards

I know you don't want to re-live it; I didn't much enjoy it myself.  But in my desperate search to find someone to blame, and thus loathe, in regards to Trent Edwards' concussion suffered in Sunday's loss, the following analysis proves that the blame may lie on the shoulders of an unsatisfactory player.  Rumblers, it's our first ever Paint Analysis - and if you like the glorious crappiness of this exercise, perhaps it could become a more regular feature... 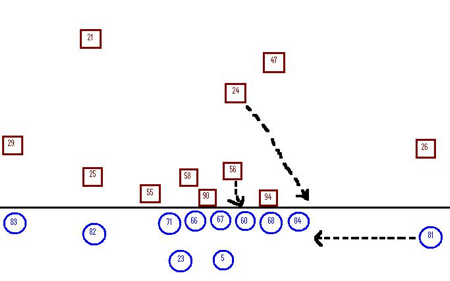 * Buffalo comes out in a three-wide set.  Edwards (5) is in the shotgun with Marshawn Lynch (23) to his left.
* Arizona counters with a dime look - three corners, three safeties.  Adrian Wilson (24) is lined up essentially in no-man's land; it's apparent that he's going to do as he pleases on this play.
* Hardy comes in motion, eventually settling to the right and slightly behind Robert Royal (84).  Simultaneously, Chike Okeafor (56) and Karlos Dansby (58) cheat up to the line of scrimmage, and Wilson comes up to, apparently, take Hardy in the slot.  Everything the Cardinals are doing to this point screams "blitz up the gut", including Wilson's actions.  The Cards appear to be playing man in the slots behind this blitz.  Appearances, as it turns out, can be deceiving.
* Other relevant notes: Eric Green (25) is lined up across Josh Reed (82) in the slot; Dominique Rodgers-Cromartie (29) and Antrel Rolle (21) have Lee Evans (83) bracketed on the left side of the formation; Aaron Francisco (47) and Roderick Hood (26) are clearly in a zone shell behind Wilson. 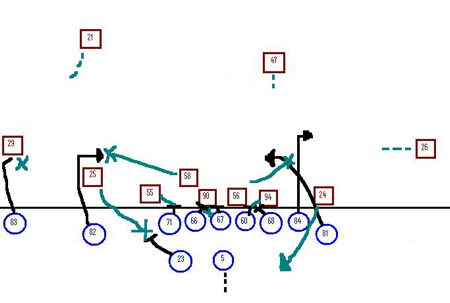 * Surprise!  Arizona's blitzing, but it's from the edges.  Dansby (58) and Okeafor (56) drop off into zone coverage, and Green (25) and Wilson (24) blitz off the edges.
* The actions of Arizona's defensive linemen make this play.  LaBoy (55) and Antonio Smith (94) rush on the interior, pinching the Bills' line into an even more tight-knit group.  It's compounded by the disguised interior blitz.  As a result, there's a pileup, and Langston Walker ends up assisting on Smith when he really didn't need to.  Wilson runs by unscathed.
* Marshawn (23) easily picks up Green, the other edge rusher.
* Reed (82) and Royal (84) are essentially decoys for the guy running the hot route, Hardy (81).  Reed draws coverage from the dropping Dansby.  Okeafor, meanwhile, is stuck in no-man's land between Hardy and Royal, who run an excellent route combination on the converted defensive end.  The problem, however, is two-fold: Hardy doesn't run it quick enough, and Wilson's untouched.
* Edwards reads the blitz and immediately knows Hardy is his guy.  Kid's sharp as a tack.  Here comes Wilson, however...

* Trent starts drifting backwards, waiting for the Hardy/Royal route combination to develop.  He makes the throw quickly; the ball is out a split second before Hardy turns his head.  The problem is, Edwards has to hold the ball a touch longer than he'd like, and he ends up throwing the ball off his back foot.  He's essentially ripe for Wilson's picking.
* Edwards delivers the first down throw, but at an awful expense.  Wilson hits high to try to knock the ball out; Edwards is too quick on the draw, but Wilson hits under Trent's shoulder and drives his helmet - in a non-dirty fashion; it has more to do with momentum than anything - up into Edwards' chin.
* As the pair go down, the back of Edwards' helmet hits the turf first.  He's very clearly going to have a sore neck and a rung bell.  Wilson - mostly because of Edwards' drifting and his own explosiveness - drives through Edwards and lands on the quarterback with his full body weight.  If Wilson gets fined, it'll be because of this last detail - he wasn't playing dirty, as many Bills fans have unfairly claimed.

Where should the blame lie?  It's spread out a bit; part of it is on a great blitz scheme by Clancy Pendergast, part of it is on Langston Walker for pinching in when he should have fanned out and tried to knock Wilson off course (though, admittedly, he wouldn't have had much time to do this), and part of it on Edwards for being a smart, gritty, loveable guy.

Will Wilson get suspended?  Almost certainly not.  Will he get fined?  If he does, it won't be for a large amount, and it shouldn't be; it won't be for a dirty hit, either.  If Wilson has to pay up, it'll be because he landed on Edwards with all of his weight.  My guess?  Wilson won't get fined, either, and he probably shouldn't.  He was just playing football.

The good news: Edwards is reportedly doing well - or, rather, about as well as can be expected at this point.  With the bye week upon us, Edwards has plenty of time to shake off the cobwebs, get plenty of sleep, take a little vacation and get ready for San Diego.  It's far too early to speculate on his availability for that game, but to this point, signs are far more encouraging than they are discouraging.  Get well soon, Trent.