Bills' Mitchell is now the 'Middle Man' : Buffalo Bills : The Buffalo News
Mitchell enjoyed a lot of success during his first five seasons in the NFL. But success has been fleeting since joining the Buffalo Bills.

Can real fans root against their team? - AFC East - ESPN
Based on submissions to the AFC East mailbag and comments left at the bottom of various blog entries, Bills fans have gotten so sickened they're actually rooting against their favorite team.

Buffalo Bills NFL News Updates - CBSSports.com Rapid Reports
- After being limited in practice Wednesday and Thursday, LT Demetrius Bell (groin), FS Jairus Byrd (hip) and DT John McCargo (calf) all participated fully in practice today. They are listed as probable for Sunday's game.
- Bills DT Marcus Stroud on if there is a sense in the locker room that the team is playing for Dick Jauron's job this weekend: "If we keep playing like we’re playing, we’ll be fighting to save our own job."

Scott Pitoniak: Bills need to stop the status woe
He discusses his recent column suggesting Dick Jauron should be fired and answers his mailbag.

Run game is the ticket – Inside The Bills
Buffalo’s run game has to be the ticket this Sunday against the Browns. It’s been one of the team’s relative constants on offense.

Bills Insider: Kawika Mitchell - Sportsnet.ca
Each Friday, a member of the Buffalo Bills will provide his insight from the NFL's front lines. This week, linebacker Kawika Mitchell talks about adjusting to a different position for this week's game and the process of dissecting losses in the coaches' meetings.

Mangini seeing signs his Browns can turn around | democratandchronicle.com | Democrat and Chronicle
New coach Eric Mangini says he can see the improvement of the Cleveland Browns, despite a 0-4 star.

Getting to Know the Enermy: Buffalo Rumblings Talks About Terrell Owens and the Desperate Bills - Dawgs By Nature
I was pleased to be joined by Brian Galliford, our Buffalo Bills affiliate, who run Buffalo Rumblings, to preview Sunday's game. Enjoy!

WBEN NewsRadio 930 - Bills Reminding Fans: Leave the Bags at Home
No bags larger than 12 x 12 x 12 will be allowed past the gates, and all bags are subject to a visual inspection upon entry.

2010 NFL mock draft - Mocking The Draft
9. Buffalo Bills - Jimmy Clausen, QB, Notre Dame
Really, is Trent Edwards the future of quarterbacking for Buffalo? The team seems to have settled on Demetrius Bell at left tackle and no outside linebackers are really worth a top 10 pick. 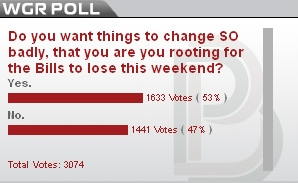 Twitter / ESPN.com's Adam Schefter
I used a hypothetical on Mike and Mike this am, and said it was a hypothetical. No more. RT @BlkSportsOnline: T.O. trade rumors? How legit?

Twitter / James Hardy
4 those that dnt no I have to miss the first 6 games due an injury last season.. So after next weeks game ull c me can't wait I'm eager!!!