Bills replay: Leaky run defense raises concern : Buffalo Bills : The Buffalo News
Allen Wilson takes a close look at the two long runs by Thomas Jones as well as the other shaky run plays given up by the Bills defense. He also analyzes the touchdown pass to Lee Evans, the play that knocked Trent Edwards from the game, and the impact of Kris Jenkins' injury during the game.

Bills blunt criticism by beating Jets -- Times Union - Albany NY
On a Monday morning when a digital billboard in south Buffalo began displaying a sign urging Bills owner Ralph Wilson to clean house, the team's players had a far different message for their disgruntled faithful: Don't count them -- or coach Dick Jauron -- out just yet.

The finest in Sunday's violent acts that resulted in ejection - Shutdown Corner - Yahoo! Sports
SDC takes a look back at the play that got James Ihedigbo ejected for throwing a punch at Derek Fine. Marques Murrell landed a punch on Fine but escaped ejection. All three will likely be fined this week.

Buffalo Bills replay: What did ugly win teach team? | democratandchronicle.com | Democrat and Chronicle
Leo Roth and Sal Maiorana discuss what we learned from the Buffalo Bills 16-13 overtime win in New Jersey on Sunday.

Should Sanchez have finished Sunday's game? - AFC East - ESPN
The five interceptions allowed the Bills to become the first team in 65 years to win despite allowing 318 rushing yards. The Washington Redskins gave up 320 rushing yards but beat the Cleveland Rams 14-10 in 1944.

Jenkins done, Edwards and Morris uncertain - AFC East - ESPN
"If Fitzpatrick were to notch consecutive victories, there would be a brewing quarterback controversy in Buffalo."

Billboard calling for Jauron's ouster goes up ... after win | ProFootballTalk.com
Jauron responds to a question about the billboard but Gregg Rosenthal says the win nor the billboard will change Jauron's fate saying, "There has to be a better cause for Bills fans to donate their money to."

Buffalo Bills NFL News Updates - CBSSports.com Rapid Reports
Bills coach Dick Jauron on why returner Roscoe Parrish was inactive vs. the Jets: "Once Marshawn (Lynch) came back it gave us more room to use Fred (Jackson) in other ways where we really like him and one of those ways is a return guy."

Jauron on Roscoe being inactive – Inside The Bills
"Both Roscoe and Freddy are terrific returners," said coach Jauron. "We didn’t feel like we were losing much quite frankly."

2009 NFL Trade Deadline: What will the Colts do? - Stampede Blue
The Colts have been very active the past few weeks, trying to make a trade for some very key players on defense and special teams including Roscoe Parrish.

Week Six Morning Aftermath: Bills 16, Jets 13 (OT) | ProFootballTalk.com
"Though Ryan erred last week by not praising Miami for great coaching, game-planning, and execution, the Bills deserve no accolades for this one."

Holding onto winning feeling – Inside The Bills
There were a lot of healthy players coming in for film review on their own accord despite being given the day off by Coach Jauron.

BillBoard: Edwards' status uncertain for Panthers
Jauron said Edwards was able to fly home with the team after Sunday's game against the Jets, but had yet to see the quarterback today, so he was not able to say how he was feeling.

Buffalo Bills quiet on status of Edwards | democratandchronicle.com | Democrat and Chronicle
Trent Edwards' condition was not updated and his status for Sunday's game in Carolina is unknown.

NFL on eBay - Tereapeak.com
The Bills are last in the AFC East in total eBay sales and 13th in the AFC ahead of only the Jaguars, Texans, and Titans over the last 30 days. THe same numbers whould have put them in the top 10 in the NFC.

Pro-football-reference.com blog " Preliminary SRS Teams of the Decade
Bills ranked as the 22nd best team of the decade ahead of the Raiders, Rams, and Cardinals who each went to one Super Bowl in that time span. 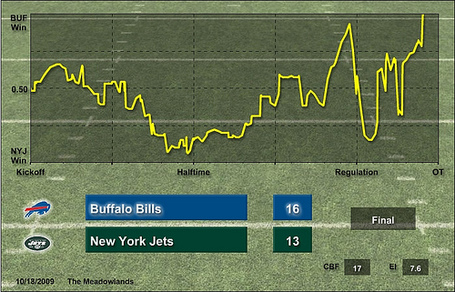 The Bills were 94% to lose near the end of the first half.
This looks like a photo of my blood pressure during the game.
http://wp.advancednflstats.com/index.php?gameid1=selectgame&gameid2=2009101811