News has come that Buffalo Bills quarterbacks coach Alex Van Pelt has been officially named offensive coordinator by head coach Dick Jauron.  While the game plan will be put together by a committee of Van Pelt, Jauron, and running game coordinator Eric Studesville, Van Pelt will be in the booth managing the game.  Van Pelt will reportedly radio the plays or play packages to backup Ryan Fitzpatrick who will relay them to starting quarterback Trent Edwards.

As many fans remember, "AVP" played on several good (but many more bad) teams in his Bills career; his coaching experience is minimal.  His rise to NFL coordinator has been a relatively fast one, as he was a member of the Bills roster as recently as 2003.

Playing Career
Van Pelt grew up in the quarterback hotbed of Pittsburgh, Pennsylvania. He chose to go to the hometown college when he decided to become a University of Pittsburgh Panther.  Van Pelt was the most successful quarterback in school history, breaking several of Dan Marino's passing records in the process.  Van Pelt, a four-year starter, holds the Panther records for most career passing yards (11,267), career completions (867) and career attempts (1,503). He held the record of passing yards in a season (3,163) until it was broken in 2003. 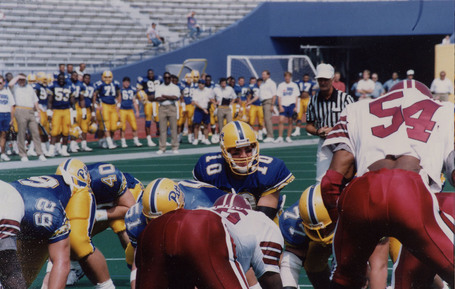 He was drafted in the eighth round of the 1993 NFL draft by the Pittsburgh Steelers, but did not make the team.  Van Pelt signed with the Bills prior to the 1994 season, but did not play in any games that year.  He was the third string quarterback for the Bills behind Hall of Fame QB Jim Kelly and then-QB of the future Todd Collins for two seasons.  His first start came in 1997 in relief of an injured Collins against the division rival Dolphins.  AVP led the Bills to a win over fellow Pitt alum Dan Marino, but threw for only 89 yards. The QB would start two more games in relief that year, but would not start again until four years later in 2001.  That year, Van Pelt started half of the Bills' games and played in four more in relief of Mr. Glass, Rob Johnson.  He finished the year going 178 of 307 for 2,056 yards (58% completion percentage), 12 TD, 11 INT, and a 76.4 passer rating.  He was then relegated back to his backup role behind new Bills QB Drew Bledsoe for two more years before retiring after nine seasons.  His career stats were mostly earned in that 2001 season: 262 completions on 477 attempts for 2,985 yards (54.9% completion percentage), 16 touchdowns, 24 interceptions, and a lifetime passer rating of 64.1. 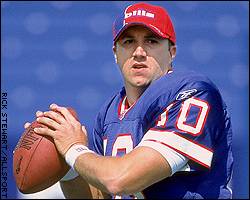 Broadcasting Career
After the 2003 season, Van Pelt auditioned for and won the job opposite Bills radio man John Murphy to replace the departed broadcasting legend, Van Miller.  Van Pelt was the color commentator for the Buffalo Bills Radio Network during the 2004 season, providing insights on the locker room and players with whom he had spent time with as a player.

Coaching Career
The former player's heart was just not in broadcasting, however, and he left after one year on the job.  In the winter of 2005, Van Pelt volunteered to coach quarterbacks at the University of Buffalo.  In the Spring of '05, he joined the staff of the Frankfurt Galaxy of NFL Europe.  He was the quarterbacks coach and also called plays for a team that finished 3-7 and fifth in the six-team league.  It was the only time in the last five years of NFL Europe from 2003-2007 the Galaxy did not appear in the World Bowl, and the only time in the final six years the Galaxy did not earn six wins or more in the team's ten game schedule.  Quarterback Kevin Eakin (who went on to be a 2007 member of the Bills off-season roster), Akili Smith, and B.J. Symons combined to go 170 for 290 (58.6% completion percentage) for 2,005 yards, with 13 TD, 8 INT, and an 83.2 passer rating.

In 2006, Van Pelt was hired by then-new Bills coach Jauron as Offensive Quality Control Coach.  The OQCC is the staff member who breaks down film on the team's offense and opposing defenses to find tendencies, strengths, and weaknesses.  He held that job during the 2006 and 2007 seasons before being promoted to quarterbacks coach prior to the 2008 season, replacing Turk Schonert, who was himself promoted to the position of offensive coordinator.  Last week, Van Pelt again replaced Schonert, this time as offensive coordinator.