Bills will need time to make transition to 3-4

Share All sharing options for: Bills will need time to make transition to 3-4 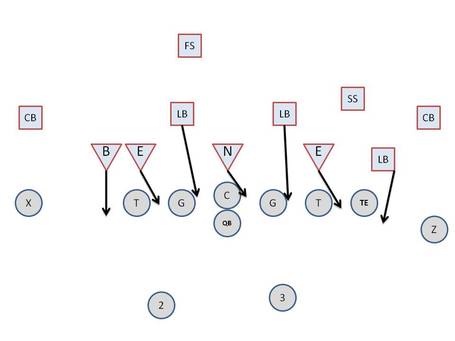 The Buffalo Bills have named George Edwards their defensive coordinator, and upon his hiring, Edwards told BuffaloBills.com that he'd start the team out with a 3-4 look - tailored to personnel strengths, of course - and move from there.

A little over a week ago, Buffalo Rumblings scout Der Jaeger took time out of his schedule to explain the basics of the 3-4 Over defense - currently employed by teams like Arizona and Dallas. In my opinion, this is the best 3-4 alignment that Edwards can possibly choose to employ in 2010 as the Bills begin a rather lengthy process of overhauling their defensive personnel.

The beauty of this scheme is that you don't need the massive, two-gap, blubbery nose tackle in the middle to make it work. The alignment focuses on employing lighter, quicker, one-gap linemen and bigger, faster linebackers behind them to make it work, as illustrated in the photo above the fold. Players would be asked to beat blockers to spots and maintain gaps, rather than overcome multiple blockers via brute strength and bulk.

Buffalo doesn't have a lineman that can play the traditional two-gap nose tackle role. What they do have are a bunch of guys stout enough and athletic enough to play one gap pretty well. A defensive line of Kyle Williams, Marcus Stroud and Spencer Johnson could absolutely handle the one-gap responsibilities of this defense as starters, and they can bring in lighter guys to rush the passer on obvious passing downs.

Aaron Schobel, should he decide to return rather than retire, would play an outside linebacker spot (and put his hand on the ground on third downs, in all likelihood), as would 2009 first-round pick Aaron Maybin. Paul Posluszny and Kawika Mitchell would be capable of handling the inside linebacker spots. All can handle one gap as well.

The real beauty of this scheme insofar as it relates to Buffalo's current personnel, however, is the fact that purely from an alignment standpoint, it's easy to disguise your looks. Buffalo's not-so-great pass rush could use a little creativity to it, and as far as pass-rushing schemes go, this is one of the best in the business. This is a defense that can be very multiple, and very tricky to diagnose where the pass rush is coming from. It's also easy to have an edge rusher put his hand on the ground; suddenly, you're back in a 4-3. This is the type of hybrid look that Edwards seems to be leaning toward, and the base of the system is the 3-4.

You'll see Buffalo's secondary play a bit more matchup football and a significant amount of man coverage. There's nothing wrong with that, so long as the pass rush gets home and Jairus Byrd is still playing centerfield to eat up those poorly thrown passes. This is a scheme that you can run zone behind as well, and obviously, Buffalo's linebackers and defensive backs are used to that.

Where Buffalo would lack, first and foremost, would be depth. The Bills will need a ton of depth brought in. They'd need to bring in prospects along the defensive line, at linebacker, and pass rushing specialists. Basically, they have enough to barely field a starting unit, and it'll be a little rough around the edges to start. The defense also has weaknesses, too; you're still light up front, so power rushing offenses can run on this defense, and gap integrity is still the most critical aspect of fielding a good run defense. (That's not to say it isn't in other schemes, but I think you get the point.)

The bottom line is this: Buffalo's transition to a 3-4 defense - if, in fact, the traditional 3-4 defense with two-gap linemen is Edwards' ultimate goal - will be a slow one. Edwards will tailor scheme to his personnel at first, and he can do so while keeping the 3-4 look as his base package. Once the Bills get situated - and, again, bring in a ton of front seven depth, which I cannot emphasize enough - they'll be able to run that hybrid look. This initial look also buys them a little time to import the type of athlete they'll need up front, and replace some of the older players (Schobel, Stroud) they'll be square-pegging into the scheme.

Buffalo needs to get bigger, faster and stronger in their front seven regardless of what scheme they run. That's still a priority. But Edwards has a shot to put a nice, hard-to-diagnose package together with a solid amount of personnel already here. This doesn't have to be a permanent move, but it's the best move for the 2010 Buffalo Bills.

As far as I can tell, Edwards has never run the 3-4 Over, but carrying 3-4 and 4-3 principles, I have doubts that he'd find it difficult to piece together.