Examining LB job responsibilities in the 3-4

Share All sharing options for: Examining LB job responsibilities in the 3-4

A few months ago, fellow Buffalo Rumblings author Der Jaeger penned a piece which explained the strengths and weaknesses of the 3-4 base defense, the 4-3 base defense, and the different variations of those defenses. Flash forward to today, and we know new Buffalo Bills defensive coordinator George Edwards is installing the 3-4 base defense prominently seen in the Parcells/Belichick coaching tree.

Recently, there has been some confusion regarding our base 3-4 versus the Rex Ryan 3-4, what sort of players we need, and most importantly, the responsibilities of the linebackers. Keep in mind that the linebackers are the lifeblood of the 3-4 defense. Both defenses require a two-gap, space eating nose tackle along with defensive ends that can set the edge while maintaining their two-gap duties. So what's the difference, and why is it important?

Special thanks to Daniel Jeremiah of movethesticks.com for some specifics on what we'll call the Rex Ryan defense. After the jump, we'll examine these issues. 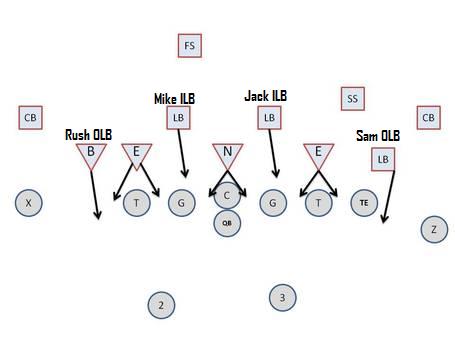 Rush Linebacker: Sometimes is called the "elephant" of the defense. Think Terrell Suggs in Baltimore or Jason Taylor of the Jets. They always line up on the weak side (where the tight end isn't) of the defense. Their primary goal is to get after the quarterback, and generally teams use a gifted pass rusher on this role. You want a guy who can bend the edge around tackles and has a counter move for when the offensive tackle tries to redirect them back inside. It's also important to have quick hands to get inside on the chest of the offensive lineman - that's a good indicator of success in the trenches.

Strong side (Sam) Outside Linebacker: They play on the strong side of defense every play. Since most offenses are right-handed, the Sam OLB generally lines up on the left side of the defense. They have to be strong at the point of attack because they take on the tight end, who tries to run block them, and they also need the ability to cover that tight end. The Sam's primary focus is run defense while dropping into coverage. They rarely line up head to head versus an offensive tackle and pass rush. Instead, the defensive coordinator draws up schemes where they might blitz.

Jack Inside Linebacker: His entire job is to keep the Mike ILB clean; by keeping the Mike clean, the Jack's sole responsibility is to take on the offensive guards and keep them away from his running mate. He needs to be very strong at the point of attack - a downhill thumper if you will. It's a dirty and underrated ability, but keep in mind that there's a reason Rex Ryan made Bart Scott his first big free agent signing. Scott excelled at this job in Baltimore, and he's now a big part of the Jets' defensive success, despite the modest statistics.

Mike Inside Linebacker: This is Ray Lewis in Baltimore. His job is simple: follow his instincts (ed. note: using his peripherals, of course), make plays, and clean up the mess. Ideally, he won't have to shed blockers because of the Jack, so he can just go hog-wild with attacking the ball carrier and point of attack. 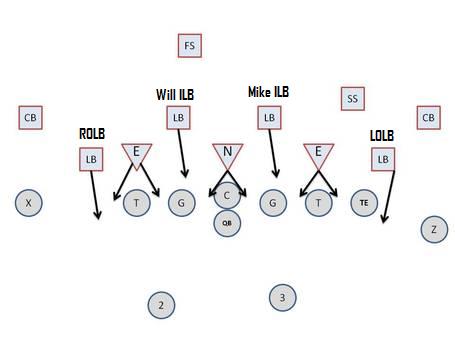 Right Outside Linebacker: The ROLB always lines up on the right side of the defense; the left side of the offense. He's somewhat similar to the rush linebacker in the Ryan 3-4 because he is generally an excellent pass rusher. However, the ROLB also needs to maintain drop responsibilities and be strong at the point of attack in case an offense puts the tight end on the left side of the offensive line or goes to a single back, two tight end formation. Essentially, the ROLB has to pass rush while dropping into coverage occasionally and maintaining run support. This will likely be Aaron Maybin for the Bills, despite his potential lack of initial quickness in coverage.

Left Outside Linebacker: Similar to the ROLB, the LOLB continually lines up on the left side of the defense; the right side of the offense. The LOLB has to be a little bit bigger and stronger at the point of attack because they are generally covered by a tight end. Moreover, they need the athleticism to maintain coverage responsibilities. Pass rush skills are also important because the LOLB will sometimes go man-on-man with an offensive tackle. One of the reasons Adalius Thomas was so successful in Baltimore was his skills as a blitzer; conversely, when he signed with New England, he didn't have the pass rush skill set necessary to beat a tackle like a LOLB has to. A good example here would have been Derrick Morgan had we drafted him. Aaron Schobel is likely to man this position if he doesn't retire; if Schobel retires, you'll probably see two downs of Chris Kelsay for his run defense, strong point of attack ability, and capability to set the edge of the line of scrimmage. On obvious passing downs, the Bills could use Danny Batten, Chris Ellis or Kawika Mitchell for pass rush ability, initial quickness, and leverage.

Mike Linebacker: This position is why the Bills signed Andra Davis. The Mike consistently lines up on the strong side of the formation; you may see the two inside linebackers switch sides with each other depending on the strength of the offensive formation. The Mike's job is to take on blockers, play downhill, and plug holes - much like the Jack linebacker in the Jets 3-4. Again, this isn't a job filled with glory, but it's an essential position; one the Bills didn't really have a player for. Kawika Mitchell's skill set doesn't match up to this job description; he's better in space and as a blitzer - taking on blockers isn't in his wheelhouse. Mitchell will likely see the field more as a third-down Mike where he can utilize his strengths as a blitzer and in coverage.

Will Linebacker: The Will in the base 3-4 always lines up on the weak side of the formation; this will be Paul Posluszny for the Bills. Another good example is Patrick Willis in San Francisco. You want the Will to be free to make plays; therefore, you want him as clean as possible which plays directly into Posluszny's strengths - his strong instincts and collapsing laterally to the ball carrier. Poz's big weakness is getting caught up in trash and his inability to shed blocks, so if the Bills are able to keep him clean of blockers, you could see a monster year from him. Nevertheless, the Will may be forced to take on and shed a decent share of blocks from interior linemen.

So there you have it. You're probably looking at a starting Bills linebacking corps of Maybin, Davis, Posluszny and Schobel. Mitchell is the odd man out at starting inside linebacker because Poz is a better Will linebacker and Mitchell isn't strong at taking on blockers; that's one of the reasons the Bills went after Davis. Mitchell will see the field a lot on third downs in place of Davis, so the Bills can utilize his blitz and coverage abilities. If Schobel retires, LOLB is thrown wide open and likely becomes a platoon of Kelsay and a more athletic pass rusher to be determined.