Welcome to the first edition of the Buffalo Rumblings Roundtable, in which the editorial staff fields questions from the community. The questions came in fast and furious, and after long and careful deliberation, enclosed you will (hopefully) find answers that will put your long lost questions for your staff members at rest. And if not, well, there is always next time! What I can promise is that enclosed is one of the most asked questions of all time! How's that for a teaser?

As well, I'd like to thank everyone for the questions that the initial call for questions received. It was fun and exciting to see the different questions and to see what is on the mind of the community at large. We plan to do this again, so be ready and have those questions ready for the next call. Oh, and the Bills responses will be coming soon... so think of this as a teaser.

Questions and answers after the jump.

Question 1: What is the football background of the members of the staff?

Kurupt weighs in to start by stating what everyone already knew:

As many of you know, I am a current Bill. I have recently been moved to OLB where my days as a money gobbling waste of space will be coming to a close soon. Besides working out non-stop, running circles around various objects with no chance of ever getting to them and treating practice like my personal Super Bowl, I've decided to infiltrate the fan base to get a better understanding of the people who watch me underachieve every week. With the millions and millions of dollars I have banked during my illustrious career, I hired a personal assistant three years ago to dictate my thoughts to the masses. I sit on my couch made of pure gold while my assistant peruses Rumblings for good topics to respond to. In order to avoid blowing my cover, I act as a self-loathing buffoon, who enjoys making sarcastic comments. I even posted a picture of myself being interviewed after one of my finest games as my avatar. I have decided to identify myself, as I will be doing much of the posting myself now as my assistant has left to work for Aaron Maybin.

In all seriousness, I am football junkie that grew up playing the sport. I decided to quit after my sophomore year of high school in order to concentrate on basketball. Now, I watch as much NFL as possible and try to make my opinions sounds as if I know what I'm talking about.

Stunning, I know - but at I know I can sleep easier at night now.

I was formerly a trainer for the Cleveland Browns, and now the Minnesota Vikings. I specialize in bicep curling. This has somehow led LeRoy Hoard, and now Adrian Peterson, to fumble the football a lot. I don't think so. More curls, AP.

Every time AP steamrolls someone in the highlights, you now know who to thank or curse if you have AP in fantasy football.

From the NFL to the CFL, my experience differs a bit from my colleagues above:

I am the typical average joe, who happens to love the Buffalo Bills, and I am also Canadian. This leads to a variety of experience with three-down football and rouges. However, the NFL will always be my first love. I also moonlight as a football referee, and have heard tails when heads was really called. But I try to forget that day...

Refs never get any love.

In high school I was a strapping young gent in peak physical condition who could singlehandedly dominate opposing teams and then turn around 15 minutes later to make all the women in the area swoon with lust. No seriously, I played football for a number of years; sadly I have the athletic ability of a one-legged woodchuck and I shunned contact like Vince Wilfork avoids vegetables.

I hate Vince Wilfork, for a number of reasons but I digress...

MattRichWarren takes the more the philosophical approach that I'm sure we can all relate to:

My football background consists of learning a lot from the bench. I am a "brains over brawn" kind of guy and was never the best athlete. I like to think I know what I'm talking about, but would never be able to reproduce it on a field myself.

I'm a professional couch potato. Watched plenty of football both on teevee and in person. I would sit and watch the draft long before it became cool to do so.

I'm with Eric insofar as football background goes. Maybe he and I should get together and form some pantless couch scouting company. We'd be in separate rooms, of course.

Yes my friends, we are a collection of couch potatos, NFL trainer and player, house leaguers, intellectuals and common folk. A proverbial mish-mash of football knowledge and opinions. This should simply confirm what you believed to know this entire time.

Question 2: Who is Geronimo?

One of the most popular questions among the members of the community is who is the infamous Geronimo. Sireric starts by stating the obvious:

Geronimo Is Brian. He would get high on peyote and see visions of the Bills future. He has since entered rehab and that is why "Geronimo" is no longer around.

Didn't believe that? Yeah, well, you know you have thought that before! I for one, am guilty for that line of thought.

MattRichWarren takes the silent but firm approach to the question of who is Geronimo: 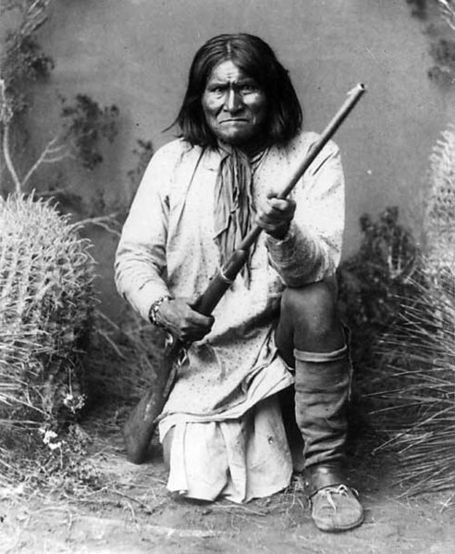 A little too obvious perhaps. Moving on to a little less obvious thought, I believe that:

Geronimo is secretly Damon Lindelof, one of the creators of the series Lost and secret Buffalo Bills fan! Using his power and influence, he gained a seat on the Bills' inner circle, and relays his information to us, which simply causes us to ask more questions!  His selection of the name Geronimo comes from his love of the band "Geronimo Jackson," which has been mentioned in previous Lost episodes.

Maybe, but not likely. Der Jaeger has another popular theory:

Geronimo was a prominent Native American leader and medicine man of the Chiricahua Apache who fought against Mexico and the United States and their expansion into Apache tribal lands for several decades during the Apache Wars. Geronimo stands for "one who yawns" in his native language. Currently, Geronimo is Brian's code name for Ralph Wilson. He's often tired, particularly watching Buffalo's dull offense. Hence, the C.J. Spiller pick.

I would be THRILLED if Ralph was technologically sound enough to participate with us on the community! You know you would be too... What are Jeff's thoughts you may ask?

Since Brian let me become an author, I’ve spent approximately 19,203 hours trying to pry Geronimo’s identity from him like my librarian in high school did while struggling to figure out which one of my friends had signed out a book as "Your Mom." One day I will succeed and be the hero in everyone’s hearts.

You would be a hero, sir, but this one is a tough nut to crack, seeing as the staff has been all over the map. Kurupt brings us a wee bit closer with:

He's actually former Major Leaguer Geronimo Peña, a utility infielder for the Cardinals in the early/mid '90s. He spent his final professional season splitting time between the Cardinals' AAA affiliate, the Cleveland Indians and the Indians' AAA affiliate... the Buffalo Bisons. As a Bison, he batted a whopping .348 and thus, fell in love with the city of Buffalo. He made the executive decision to stay put after his baseball career and got into espionage and football scouting. For the next 12-14 years, he spent his days pretending to work for the Bills in various administrative duties, studying the players/coaches and planting bugs throughout One Bills Drive. When he was on the verge of being outed, he was able to use the intel he had gained to post his information to Buffalo Rumblings, a new blog he had found after doing a Google search for his favorite college football player of all time, Martin Rucker. Amazingly, he was able to continue his role with the Bills after lying through his teeth about what he had been doing. With the help of a mole in the organization, he kept up his appearances and information dumps at Buffalo Rumblings. Once the ball got rolling on firings around OBD with the axing of Dick Jauron, Geronimo made the decision to retire before he was fully found out. His current whereabouts are unknown.

Wow. Sounds very intense. However, if this is true does this mean that Geronimo will never be found again? It would explain the silence. Cries are heard throughout the Rumbling faithful! Please Brian, save us with some insight and put this to bed once and for all!

I know Geronimo. I've met Geronimo. Hell of a person. Geronimo's around. So relax. That's all you're getting from me, ever, so quit asking. :)