How Are You Handling The Buffalo Bills' Losing Streak?

Share All sharing options for: How Are You Handling The Buffalo Bills' Losing Streak?

Last week was Thanksgiving. As I'm sure many of you have experienced, holidays are a time for family and friends to catch up and ask questions about each other's lives. As such - and as you may imagine - last week I fielded a few questions about this blog and the Buffalo Bills in general.

One question asked by a friend got me thinking. The question: "How are fans handling the losing streak?" The answer is complicated, and difficult (but very interesting) to try to prove.

In essence, I answered the question two ways (then did the research to double-check my hunches; I believe I was accurate). My thesis: football fans deal with their favorite team in two ways, whether they're conscious of it or not. The first way fans cope is with their team's week-by-week performance.

I went back through our traffic archives to take a look at the total number of page views BuffaloRumblings.com received on the Monday after each game this year. I then plugged them quickly into Excel to come up with a graph, which you can see below: 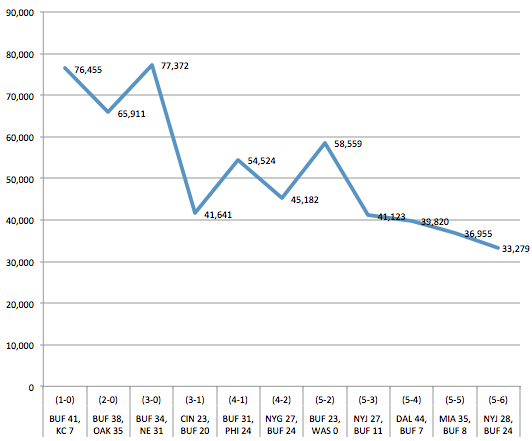 The obvious trend (and the obvious answer) is that traffic, and therefore interest, is trending downward. No kidding. So is Buffalo's season.

The more interesting point here, however, is that even during a hot start, our readers went out of their way to avoid other Bills fans the day after a loss. We'll be keeping track to see if the trend holds up for the rest of the season (and it'd be nice if the Bills won another game to give us a chance to do said proving), but it doesn't strike me as a coincidence that the five highest-trafficked Mondays this season have come after each of the Bills' five wins, nor that the six lowest-trafficked days after the six losses.

Ergo, my first answer - based on a hunch - to the original question was that Bills fans avoid talk of their team after a loss - no matter the circumstances. Therefore, our blog's traffic has tanked over the last month. Sad face.

Notice, also, that traffic dipped dramatically for a by-the-skin-of-their-teeth victory (Oakland). This, also, does not strike me as a coincidence.

There's the week-by-week handling of your favorite team, and then there's the overall, cumulative handling of your favorite team's progress (or lack thereof), which SB Nation has rolled into a handy little device called the Fan Confidence Poll. You can see it atop the left sidebar on the front page of the blog, right under our happy red cartoon bison logo. (Despite what MRW tells you, that logo has not been named.) Fans vote on it every week.

Overall, the trend is similar: fan sentiment was high at the beginning of the season, which again is unexpected. But notice that the peaks and valleys of the traffic graph are gone. This poll is measuring fan confidence, which is a far different feeling than the peaks and valleys of a week-to-week NFL regular season schedule. Therefore, the drop-off in fan confidence is far steeper and more sudden. The consistently high marks strike me as a general belief that this year might be different, and the point at which the graph dips measures the psychological breaking point of Bills fans this season.

When I was asked the original question (again: "How are fans dealing with the losing streak?"), my answer was as follows: fans will always generally be happy when their team wins, and will generally be miserable and moody when their team loses. To everyone who hangs out here on a weekly basis, win or lose, I think you would've answered the same way - and for those who don't, I think the graph gives that idea credibility.

The other half of the answer: Bills fans feel duped. Again. They held onto the belief that the team had finally turned the corner for as long as was logically possible, but going oh-for-November and getting blown out for a full month, falling below .500 and watching the team stink up various NFL cities has fans kicking themselves for believing. I don't think that's an unfair statement to make, insofar as sweeping generalizations go, and I also believe the Fan Confidence Poll backs that up.

What do you think, Bills fans? I don't want to make any more generalizations about the fan base without your input - and I find the psychology of being a sports fan (particularly a Buffalo sports fan, where heartache is commonplace) fascinating. Do you avoid talk of your team when you lose? Do you feel duped this year?