Buffalo Bills Uniforms Throughout The Years

Share All sharing options for: Buffalo Bills Uniforms Throughout The Years

With news coming this morning that the Buffalo Bills will be changing their uniforms for the 2011 NFL season, it's a great time to re-examine the past looks the team has sported over their first 51 years.

1960-1961
(11-16-1 record, no winning seasons, no playoff appearances)
When the Bills began playing in 1960, the team's colors were royal blue, white, and silver. When they took the field for the first time, the team wore blue jerseys with gray numbers and white jerseys with blue numbers. The helmets were all silver with blue numbers on the side. Ralph Wilson was a minority owner of the Detroit Lions, and hired coach Buster Ramsey, who was Detroit's defensive coordinator, so it makes sense that things might be based on past experience. It has been rumored that the Bills' original uniforms were hand-me-downs from the Lions. 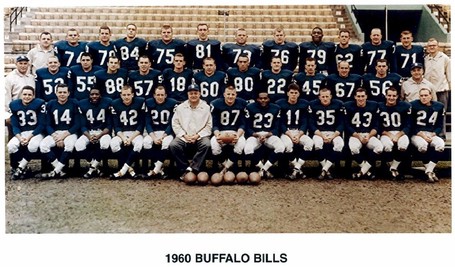 1962-1973
(71-100-7 record, six winning seasons, four playoff appearances, two AFL titles)
In 1962, the Bills changed their official colors to red, white, and blue. The standing red buffalo was adopted as the team's icon and placed on a white background to give the Bills their new look. Red stripes were added to the uniforms and the helmet. In 1965, blue stripes were added to the helmet. Home uniforms were royal blue and away uniforms, modeled by Jack Kemp here, were white. In 1973, the Bills wore blue pants instead of white when O.J. Simpson became the first player to rush for 2,000 yards in a season. In 2005, the Bills revived the standing bison helmet and uniform of the mid-1960s as an alternate uniform. 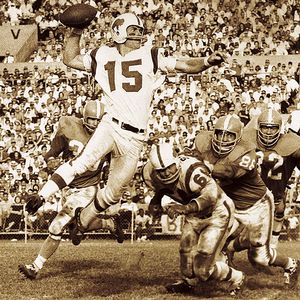 1974-1983
(67-78 record, four winning seasons, three playoff berths)
In 1974, the red standing buffalo was replaced by a blue charging buffalo that is still used today. From 1974-78, the helmets featured gray facemasks, but in 1979 dark blue facemasks (see below on Joe Ferguson) replaced the gray ones and remained through the 1983 season. 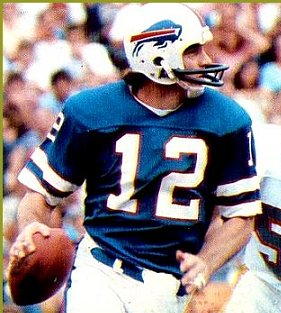 1984-2001
(150-137 record, ten winning seasons, ten playoff appearances)
In February of 1984, the Bills announced that they were switching their helmet color, going to red after wearing white headgear since 1962. While the color changed, the charging buffalo on the side and blue facemasks both remained. It was speculated that the color switch was to help quarterback Joe Ferguson distinguish his receivers from opposing defenders, especially the three division opponents (Dolphins, Patriots, and Colts), who also wore white helmets. The Bills also adopted a large mesh uniform for warm weather games (below, left). Minor variations to numbers and striping took place in intervening years, with the most notable being the change from blue facemasks (below, left) to white facemasks (below, right).

2002-2010
(59-85 record, one winning season, zero playoff appearances)
Reportedly at the behest of GM Tom Donahoe, the Bills most recently changed uniforms in 2002. The white uniforms include a red stripe on the sides and are dark blue along the shoulders of the uniforms. The home uniforms went from a lighter royal blue to dark blue. Both home and away jerseys added piping along the numbers as well. The team kept the same logo and helmet. The Bills usually wear the all-blue combination at home and the all-white combination on the road when not wearing the throwback kit.

Complete History in Pictures
via SportsLogos.net