Buffalo runs a hybrid passing game incorporating all four NFL offensive philosophies. This offense calls for many skills from the quarterback. Chan Gailey himself said that accuracy and decision-making were the primary traits required by a quarterback.

Contrary to numerous reports, Gailey's offense is not best run by a mobile passer. While mobility adds to a quarterback's ability to execute the offense - specifically taking yardage on the ground when the defense affords it - this can be said about any quarterback in any system. 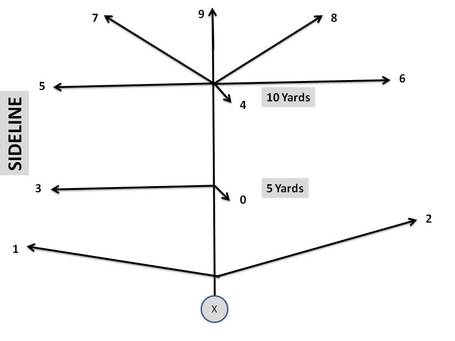 The route tree is for reference. While the "number" system is directly related to the vertical timing offense, it's easiest to reference and we'll use it throughout.

Gabbert will experience a moderate transition with this offense. He's familiar with dump off and bubble screens, which employ similar distance as the horizontal offense. Unlike the run-spreads that Florida and Auburn use, Missouri ran a pass-first spread. While Gary Pinkel ran plenty of predicated throws, Gabbert was required to make quick reads and throw into small windows. Gabbert's transition will consist partly of learning to make the same reads while dropping back from under center. 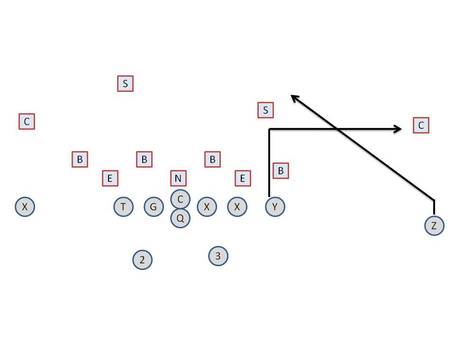 The horizontal timing passing game calls for route Nos. 0-3. There are specific variations of all of these. The longer routes are mixed in as well, but the bread-and-butter are the quick-hitting routes. The reads come into play in how the defense reacts. A typical West Coast play may have the tight end running a three, and the same-side receiver running a two. This creates a small cross, or even pick play, that the quarterback must read to determine who is likely to come open. 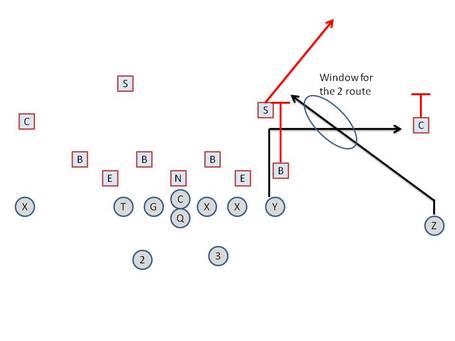 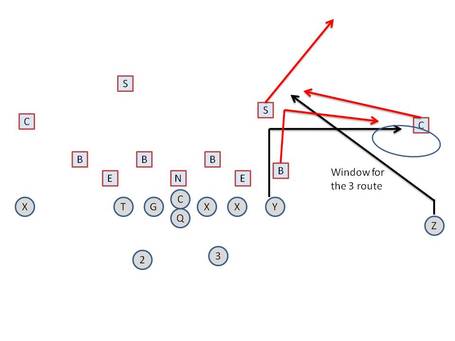 If it's man, the tight end will typically come open on the three. While Gabbert may not have the experience with some of the more complex reads, he has experience making these types of reads. Gabbert is very accurate, especially on shorter routes, and makes good decisions. He places the ball well in the strike zone, and can throw to a spot. This offense should require a moderate transition for Gabbert.

Gabbert in the Vertical Timing Offense

This offense will be difficult transition for Gabbert. The vertical timing offense calls for similar reads, but typically those reads are 10 yards or more down the field. This offense relies heavily on route Nos. 5-9, with many of the shorter routes mixed in. A typical vertical timing offense will have two receivers to a side, with the inside receiver running a nine and the outside receiver running an eight. 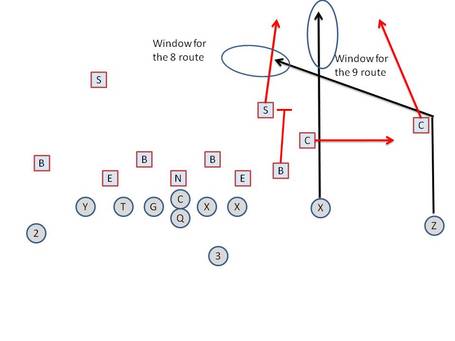 In this simple play, the quarterback has to read the play side safety, corners, and linebackers. The first read is to determine if the corners are playing man or zone. If they are playing zone, both routes may come open. The slot nine may split the corner and the safety at the seam, and the outside eight may split the safety and the dropping linebackers. The next read is to see if the safety is playing a deep zone or a shallow zone. If deep, which is more likely, the quarterback has a better shot with the eight depending on the deep range of the safety. The final read is to determine the depth of the linebackers. If they are at a normal depth, then the eight will open up. If they are deep, like the middle linebacker in a Tampa 2, then the eight will be covered. 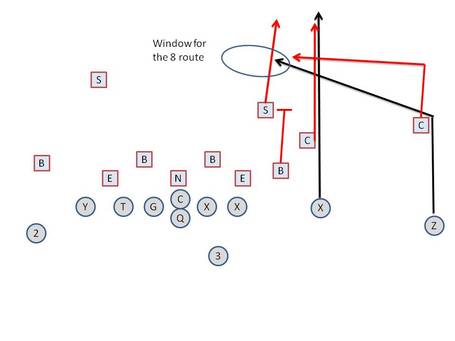 As with the horizontal timing offense, the quarterback throws to a spot. This spot is more difficult to throw to, though, because the quarterback is winging the ball 15-20 yards in the air to a spot. The quarterback needs a little gunslinger in him in this offense. Gabbert has the attitude, but his completion percentage was low at Missouri, despite possessing the arm strength and good accuracy.

Gabbert in the Erhardt-Perkins Offense

This offense should be fairly simple for Gabbert to adjust to. This offense is similar to the old 1980s New York Giant offensive teams: short routes mixed with longer routes, see who comes open and throw him the ball. Lots of high-percentage throws. 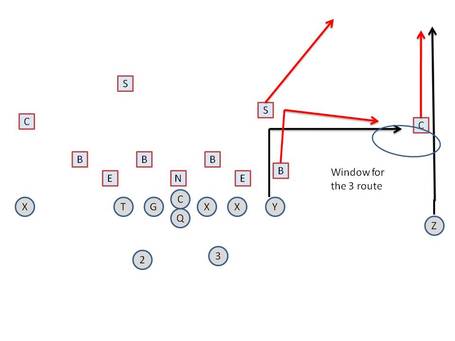 A good example of this type of offense is where the tight end runs a three and the same side receiver runs a nine. If the corner is in man, the tight end should beat the covering linebacker on the three. 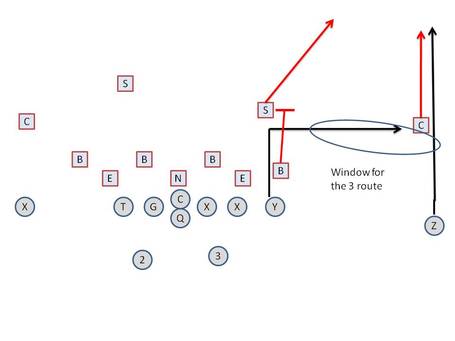 If the corner is in a deep zone, the tight end should come open in the short zone. 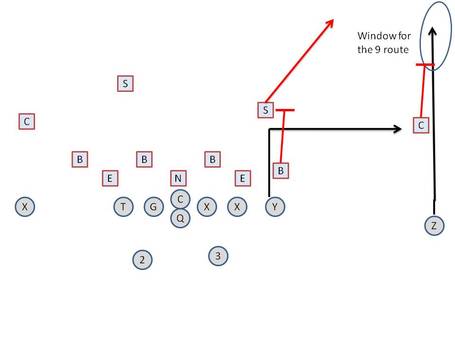 If the corner is playing shallow zone, hit the nine before the safety comes over the top to help.

These types of plays should be expected from Gabbert early on, as they are high-percentage, low-risk, and easy to read. They are also executed best with a power run game to take the load off the quarterback.

Gabbert in the Sight Adjustment Offense

This offense should not present challenges for Gabbert. Much of what Gabbert did at Missouri was reading the defense pre-snap, and adjusting the receiver's route accordingy. 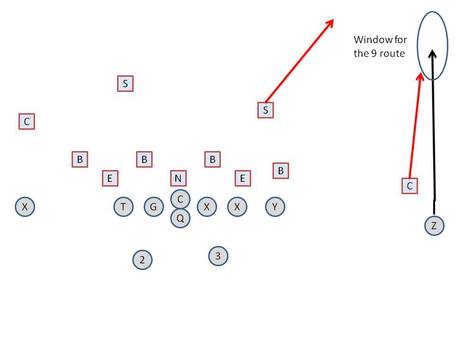 This offense is the old run'n'shoot offense, and has been picked up quickly by numerous quarterbacks at all levels. Gabbert has the talent to run this offense effectively, and ran part of it at Missouri.

Assessment
While not the project that other quarterbacks in the class are, Gabbert is still a project. He's going to need reps running Gailey's vertical timing plays, in particular, to solve whatever issues he has completing deeper throws. Keep in mind that the plays described earlier are the among the simplest reads; the majority of the plays from the offenses are much more complex, and involve both sides of the field, and the running backs.

If forced to play early, Gailey will need to narrow his offense to away from vertical timing plays. While this seems to be OK, with Gailey able to draw plays from the other three philiosophies, taking away the vertical timing plays will allow a defense to collapse all 11 defenders inside 10 yards from the line of scrimmage. This will clog up the horizontal timing lanes, and diminish the run game.

Gabbert reminds me of another player Buddy Nix drafted: Philip Rivers. Like Rivers, it is in Gabbert's best interest to sit a year (or two) to learn the vertical timing offense and open up his passing options.