A week ago today in our Buffalo Bills re-watch series, we took a broad look at the Bills' overtime loss in Week 7 to the Baltimore Ravens. Though a frustrating loss in which the Bills shot themselves in the foot and struggled mightily defensively, there was a lot to like about the team's offensive performance, as they dropped 34 points on a typically stingy Ravens defense.

In particular, we pointed out how Buffalo's top two wide receivers, Lee Evans and Stevie Johnson, had their way with Ravens cornerbacks Lardarius Webb and Fabian Washington. Ryan Fitzpatrick completed 12 of 16 passes for 201 yards with three touchdowns in the first half. Johnson had four grabs for 102 yards and a score at the break, and Evans had two catches for 53 yards and, yes, two touchdowns.

The Bills did not need to do anything earth-shattering schematically to win these matchups - they were simply efficient, and the Ravens' cornerbacks were dreadful. After the jump, we'll show you how the Bills kept Baltimore's defense on their heels in scoring 24 first-half points.

First, we'll take you through a couple of shots that show just how badly Johnson got Baltimore's corners turned around. Then we'll take a three-step look at a play that the Bills used to perfection all day long.

Here, Johnson is lined up opposite Washington. This is a simple slant pattern - which is very difficult to defend if you're playing man coverage - and Johnson effectively got Washington turned completely around with a simple jab step to the outside. 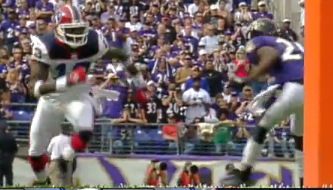 On this play, Johnson is lined up opposite Webb - this was Johnson's touchdown reception. Clearly anticipating the idea that Johnson was going to run a slant, Webb bites hard on a jab step to the inside from Johnson, who then coasts past Webb on a fly pattern. Fitzpatrick threw this ball on a quick three-step drop out of the shotgun with no wasted time, not getting touched on a six-man blitz - that's how quickly Johnson burned Webb. In this shot, Johnson has taken only two steps, and Webb is the pictorial definition of a defender on his heels.

This was the formational setup of the play-action slant play that Baltimore struggled to defend all afternoon. Shawn Nelson was lined up at tight end, with Roscoe Parrish in the slot, Evans on Parrish's side of the field, and Johnson isolated on the opposite side of the formation. This was Buffalo's best personnel package all day.

Directly after the snap, if you look closely, Andy Levitre is pulling to the right side of the formation from his left guard spot. Note that Baltimore's linebackers and nickel corner have already committed steps toward the line of scrimmage, as Fitzpatrick's back and the pulling guard are obvious run keys. 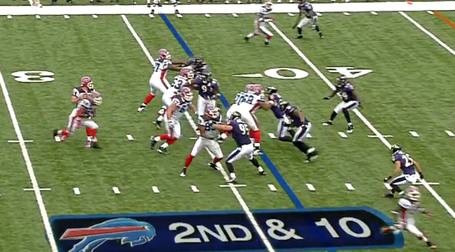 This shot comes right after the play-fake was executed. A linebacker and Chris Carr, the nickel back, have sunk their hips trying to recover, knowing that they've over-committed. Jarrett Johnson (95), who is wholly capable of making Nelson look foolish in pass protection, is upright with arms extended, ready to shed into a running lane. Meanwhile, Johnson has just turned his head looking for the ball out of the break in his slant route, and the throwing lane is wide open. Johnson caught this pass and turned it upfield, breaking a tackle and gaining 43 yards on the play. (They'd get two more big gainers on this play in the second half, as well.)

The Bills missed some opportunities to put up even more points in the first half (a Parrish fumble and a poor red zone sequence following a turnover), as Baltimore had no answer for anything they did. They'd have carried a lot more momentum into the second half, too, without two foolish turnovers - one at the end of the first half, and the other at the beginning of the second half.