Now into our fourth game in the Buffalo Bills re-watch, I've still yet to re-evaluate a winning Bills performance. As such, it's been rather painful to watch certain things happen all over again. I expect that feeling to increase exponentially when we get to Week 12.

Of all of the players I've watched to this point that have frustrated me, Lee Evans ranks at or very near the top of the list. It's not a production thing; in the four games, Evans caught 19 passes for 279 yards and four touchdowns. It was just apparent that he and Ryan Fitzpatrick were not as in sync as the rest of the team's receivers - this is not surprising, given that Evans worked with Trent Edwards for the majority of training camp and the pre-season - and Evans was also frustrating in that he continually dropped passes.

After the jump, we'll take a look at an especially disappointing play from the team's Week 9 loss to the Chicago Bears. In the play, Fitzpatrick made a beautiful individual effort to beat a Bears blitz, and Evans couldn't finish the play.

In the play, the Bears disguise a blitz, give the Bills a few matchups to exploit behind it, and Fitzpatrick takes the hardest route to success. He still finds it, but Evans drops the ball.

Above, this is a pre-snap shot. The Bills have four receivers on the field, so the Bears counter with three linemen, two linebackers and six defensive backs (a dime package). Before the snap, Brian Urlacher is lined up between center and right guard, and safety Chris Harris is creeping toward the line of scrimmage behind Lance Briggs. You can't see it (yet), but Evans is alone on the left side of the formation, and Stevie Johnson, Roscoe Parrish and David Nelson are lined up to the right.

Here, the ball is snapped. Fitzpatrick sees that Harris is blitzing, meaning that his hot read is behind Harris, where Evans has single coverage against cornerback Charles Tillman. The Bills will target Evans against single coverage every time he gets it. Meanwhile, you can see Urlacher dropping to his right to fill in the passing lane vacated by the blitzing Harris. If Fitzpatrick saw him here, this was where his gunslinger side came out, because he made a very gutsy throw...

... even though he had options to the right. Fast options, too. The Bears' blitz is a zone blitz, meaning that defensive end Israel Idonije is dropping to cover Nelson out of the slot. Evans has a good matchup, but I think it's fairly obvious that Nelson has a better one. The blitz prevents Fitzpatrick from ever looking at that side of the field. Parrish has off coverage and is running a very short route, as well, so he'll be open.

Here, Fitzpatrick is setting to deliver the football to Evans. You can see that Urlacher is comfortably in the passing lane by this point, that Nelson has a step and counting in the seam (though there is a safety over the top of him), and that Parrish is coming out of his break. If you squint, you can also see that Fred Jackson has chosen to assist Andy Levitre with his blocking assignment, rather than pick up the blitzing Harris. The safety has Fitzpatrick dead to rights. 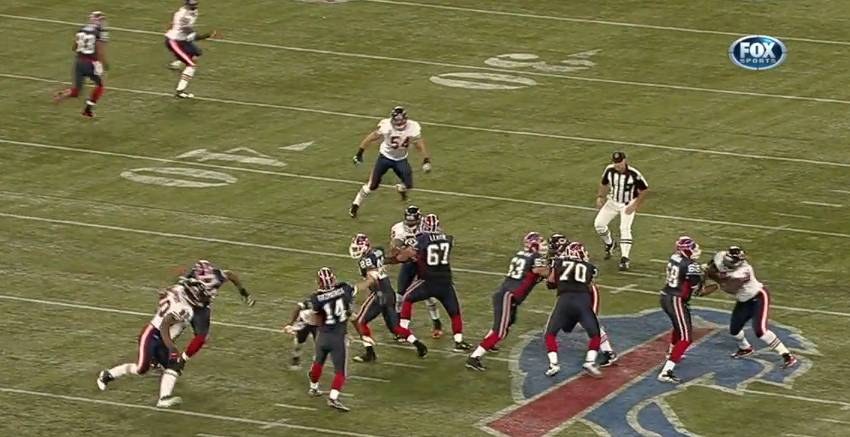 Fitzpatrick throws the ball before Evans is out of his break. As the ball is released, Harris hits Fitzpatrick squarely in the midsection. At this point in time, you can forget about Nelson and Parrish. It's now all about Fitzpatrick's throw in the face of a free blitzer - the ball has to get over Urlacher and in front of a breaking Evans. 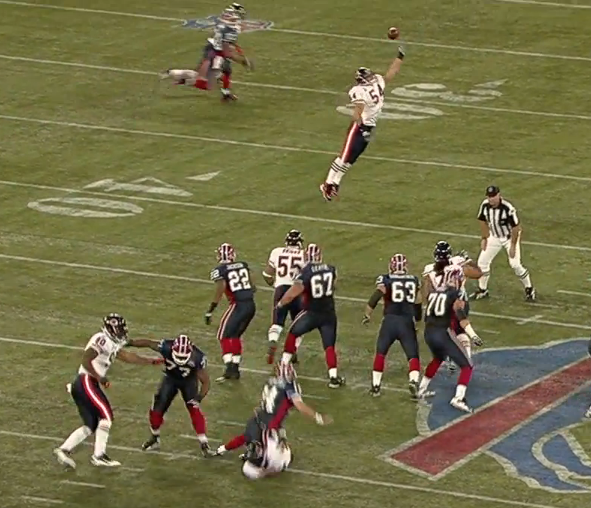 Phase 1 of that plan is accomplished. Fitzpatrick could not have thrown a prettier ball with a Bear wrapped around his legs, folks. The ball neatly soars by the hand of an outstretched Urlacher. Evans has made his break, beaten Tillman to the inside, and has a beat on the ball.

There you have it. Ball in the breadbasket. Evans drops it. Had the Bills not continued on to score on this drive and tie the game at halftime, we as fans might have been talking about this play far more often last season.

This is the frustrating aspect of Evans' game, at least from what I've seen of his 2010 performances. He just was not as reliable as the rest of the team's receivers. That is a perfect pass, and he just straight-up dropped it. Tillman didn't even do much to create separation of ball and receiver. Just a drop.

Buddy Nix and Chan Gailey have talked about surrounding Fitzpatrick with better talent moving forward. That's important (specifically when it comes to pass protection), but it's also important that Fitzpatrick continue to develop rapport with his receivers, Evans chief among them. They did some good things last year, but there was potential for so much more - even when the two were statistically clicking.