To start, we'd be remiss if we didn't bring up Carrington's stance, since we spent so much time looking at Torell Troup in that capacity. In the still below, notice two things: how flat Troup is, and how (relatively) angled Carrington is. Keep in mind that the Pittsburgh Steelers were operating out of the shotgun here, which changes up stances somewhat, particularly with younger players. 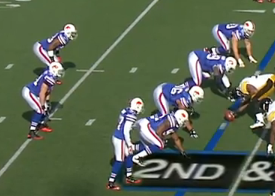 Even earlier in the season, when Carrington saw spot duty, there was some angle in his stance. We'll keep an eye out to see if he flattens out at all, the way Troup did. However, there was a fundamental difference between Carrington and Troup that I've got to point out: Carrington was much better at the point of attack early on than Troup was.

Now, there could be a myriad of factors behind that fact. Troup's playing at a position where it is notoriously more difficult to get good leverage. Carrington, despite the angle of his back, fires out of his stance very low, and has long arms to stack blockers upwards. It also seems very apparent to me that Carrington had much more natural strength than Troup did last year, though both looked quite strong. Carrington also saw significantly fewer reps, which may very well have protected him from being exposed.

Johnson's injury suffered against Detroit allowed Carrington to sneak a few reps in against Cincinnati, where he just sort of blended in and didn't do much. He really stood out against Pittsburgh when Edwards' injury forced Buffalo to put him on the field; he was all over the place, finishing with his first career sack and running around in Pittsburgh's backfield quite often. There was plenty to like about this performance, without question.

The lone unassailable fact about Carrington, however, is that we still don't have a big enough sample size of reps to accurately judge him. He flashed brute strength, the ability to play with leverage, and some playmaking ability in these two games. He also disappeared from the action and looked slow to react on many occasions. Reserve your judgment on this guy, but don't be afraid to be bullish about his potential. I know I am.