If you've been paying close attention to our Buffalo Bills re-watch, you may have noticed us talking about Demetrius Bell's struggles with powerful pass rushers during the 2010 season. Though Bell was terrific in games such as Pittsburgh, he struggled with taller, meatier rushers such as Julius Peppers, Jared Allen and even Michael Johnson.

Typically, the stronger the player Bell was assigned to block, the more difficulty he had completing his assignment last season. We've conveniently chalked that up to Bell not being able to strength train last off-season as he rehabbed a shredded knee, but this is going to be something that teams try to exploit moving forward. Bell has excellent athleticism, making it difficult for defenders to beat him with speed, but he can be handled by more physical players.

Against Minnesota, Bell had his worst game of the season (and he wasn't alone that day, either). After the jump, we take a look at two plays to see how Allen quickly got into Bell's head. 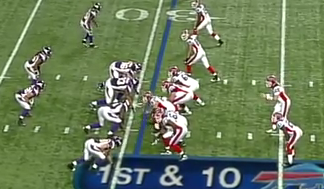 We'l start in the first quarter. The Bills are in a shotgun, and Bell is left isolated on Allen. C.J. Spiller is lined up behind him, but he'll go out into a pass route, which means Bell must handle Allen one-on-one. 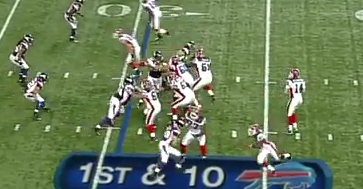 At the snap, Allen moves hard outside, and Bell mirrors him. Allen quickly hits him with power on his inside shoulder, and as you can see in the snapshot, Bell is already off balance. 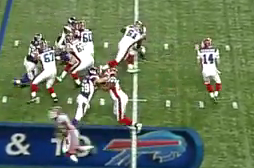 It doesn't help that Mansfield Wrotto is struggling on the other side of the alignment with Ray Edwards, of course. But here, you can see that Allen is now powering Bell backwards on his inside shoulder, while Bell is simply fighting to anchor.

Here, Allen is completely underneath Bell, and has driven the tackle backwards another yard. Bell's head and shoulders are snapped backwards as Allen uses a rip move to separate and clear his path to Ryan Fitzpatrick.

Fitzpatrick is rocked as he throws. Thankfully, this pass fluttered harmlessly incomplete. (Wrotto, meanwhile, is fairly blatantly holding behind the quarterback. It went uncalled.)

Let's move to the second quarter. Bell's struggles had continued all day to the inside, and on this play, Allen used that to his advantage. 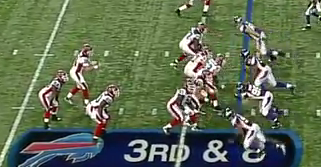 At the snap, the Bills are in the shotgun again, and they've got a back and a tight end in to chip. Because they're both aligned to the right, where the Vikings had shown blitz, Bell is again isolated against Allen. 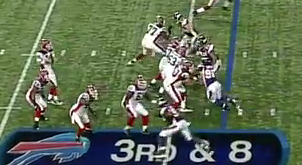 As Fitzpatrick fields the shotgun snap, Bell displays good technique as Allen makes a move toward the inside, where he has handled Bell with ease all day. 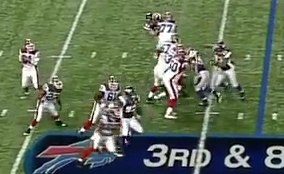 Whoops. Allen's going outside, and Bell is late to react, having hedged inside. Bell's back is perpendicular to the line of scrimmage - the worst position a tackle can be in. All Allen needs to do is separate from Bell, and Fitzpatrick is toast. 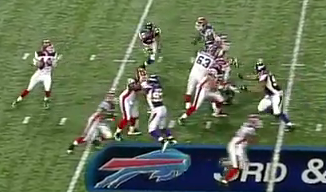 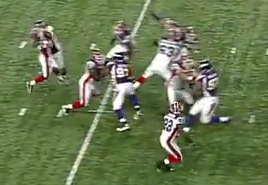 You know you can feel Ryan Fitzpatrick's pain right now. That very obviously was painful. Fitzpatrick compounded the issues on this play by throwing the ball directly at Antoine Winfield, who picked it off and very nearly returned it for a touchdown.

Allen had beaten Bell badly to the inside all day, and used that to his advantage in getting Bell to hedge inside, then toasting him with speed off the edge. Allen got Bell thinking, and that's the worst thing a young left tackle can do when he's playing one-on-one football. Bell's struggles with Allen's power got him in trouble early, and it was all downhill from there.

Bell was very one-dimensional as a pass blocker last season, in that he was very finesse. He had no problems with speed - unless he faced a good power rusher that set up the speed move early in the game. That's how Cincinnati's Johnson got to Bell, and it's how Allen got him, as well. Power is something that Bell will need to come into 2011 better equipped to handle, and it's why we spend so much time talking about his need for better strength training. If he can better handle power, he'll be a surprisingly adequate left tackle. Right now, that's a big if.