Due to his work with quarterbacks such as Kordell Stewart, Tyler Thigpen and most recently Ryan Fitzpatrick, Buffalo Bills head coach Chan Gailey has long been hailed as an offensive innovator. He has a reputation as a coach that can get a lot of production out of players who may otherwise be considered amongst the dregs of the NFL's talent heap.

At least in terms of prominent skill talent offensively, the Bills have players that can win on the edge in Lee Evans and Steve Johnson. Buffalo was at its best offensively last season when they were also able to hurt defenses in the middle of the field. An offensive wrinkle from Gailey helped them achieve that from time to time.

After the jump, we'll take a look at an alignment used frequently by Gailey throughout the season - no matter which players were or were not at his disposal - and how it helped the Bills hurt defenses at all levels of the field.

The wrinkle Gailey threw into multi-receiver personnel groupings last season was stacking his slot receivers (as you may have already gleaned from the headline of this post). This almost always happened in four-receiver sets, and the stacking almost always included receiver David Nelson, who was used more in the slot than any other receiver in the NFL last season. In the below photo, you can see an example of the stacked slot receivers alignment. 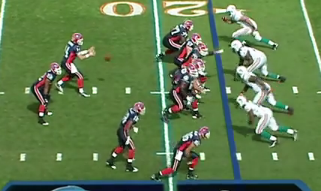 This still came from Nelson's terrific touchdown reception from Ryan Fitzpatrick in the Bills' Week 15 win over the Miami Dolphins last season. The Bills were depth-depleted at receiver, as by that point in the season, both Roscoe Parrish and Lee Evans had landed on IR. Not pictured is Johnson, who nearly always lined up wide last season, and Donald Jones, who filled in out wide for Evans in this particular alignment. Where Gailey typically lined up Parrish behind Nelson, in this case, Naaman Roosevelt was the stacked slot receiver.

The most natural advantage gained here is that it's more difficult for defenses to not only defend routes coming from the same area, but also to note where everyone is pre-snap. Even more advantageous is the use of Parrish and Nelson in particular: Nelson is so tall, and Parrish so short, that "hiding" Parrish behind Nelson in the stack ramped up the difficulty level for defenses. Add in the unique talents of those two players, and it's an idea that Gailey almost had to explore.

Heading into the 2011 season, expect to see more of these wrinkles - and expect C.J. Spiller to become a more prominent member of the stacking party. Without continued improvement from Evans and Johnson on the edge, this alignment and the advantages it offers won't matter as much, as defenses will need to be worried about the team's top two receivers before this personnel grouping reaches its most useful level. We've talked up the team's slot receiver talent all off-season, and out of this alignment, the Bills were able to successfully execute many different routes last season - and almost all of them hurt defenses at levels Buffalo's offense rarely explored before Gailey's arrival.

This is hardly anything earth-shattering; it's just a wrinkle worth keeping an eye on when the new season begins. Fitzpatrick is at his best finding mismatches and exploiting them, spreading the ball out to everyone. This is an alignment that, if all goes well, will help him do that - and maybe even mask some weaknesses up front by getting the ball out of his hands quickly.