Of the many great offensive plays that the Buffalo Bills made during their 4-12 2010 season - yes, good plays happen on bad football teams - arguably none were prettier than running back Fred Jackson's 65-yard touchdown reception in a Week 12 loss to the Pittsburgh Steelers. Jackson caught a short pass underneath, got a few blocks, and then sprinted straight up the middle of the field for a critical touchdown.

It was a play that the Bills rarely ran last season, but all Pittsburgh would have needed to do to prepare for the play was check out film from Buffalo's contest against one of their chief rivals: the Baltimore Ravens.

In a Week 7 road loss, Buffalo ran a very similar play to Jackson that, were it not for an illegal formation penalty against the Bills, would have yielded 21 of the easiest yards Jackson picked up all season. The personnel packages were ultimately different, but the play execution was the same. Let's get into it after the jump.

We'll examine this play by lining them up side by side (sort of). We'll look at the two different personnel groupings the team used, what went wrong in Baltimore, and the outstanding blocking that the team had on each play. 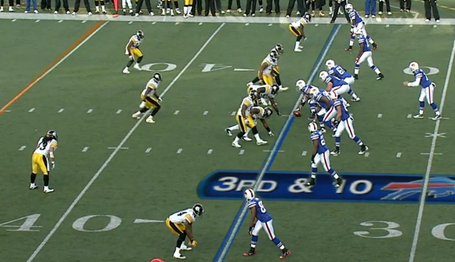 We'll start against Pittsburgh, when the only notable name missing from the lineup was slot receiver Roscoe Parrish. The Bills lined up in an empty set, with four wide receivers and Jackson on the play. Three receivers line up to the left, with Jackson splitting Lee Evans and David Nelson. Donald Jones is in the slot to the right, and Steve Johnson is lined up wide right. 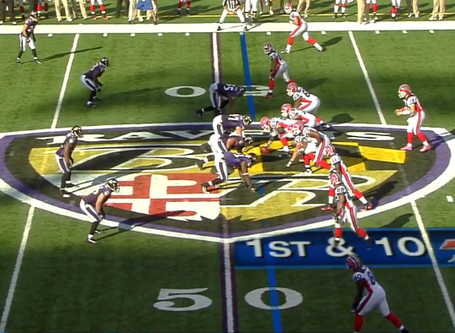 Against Baltimore, the alignment is exactly the same (with a catch), but the personnel package is different. Here, in an empty set, the Bills have two receivers (Evans and Parrish), two tight ends (David Martin and Jonathan Stupar) and Jackson on the field. Evans is in the slot to the right, with Stupar out wide right. Jackson is in the same place, flanked by Parrish to the inside and Martin wide left. This screen tells you exactly why the Bills were flagged on the play: on the left side of the alignment, neither Parrish nor Martin are lined up on the line of scrimmage. The left tackle must be covered. Aside from this mistake in alignment, the play was executed brilliantly by, let's face it, a second-rate offensive personnel package. 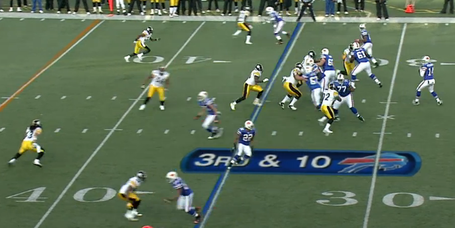 Now for the play execution: Jackson, in both instances, will immediately run to the outside, then pivot back toward the inside. Here, you can see him executing his pivot; he'll turn his body to the left and catch the ball facing quarterback Ryan Fitzpatrick. You can see a two-on-one blocking situation in Pittsburgh's favor developing: Nelson is heading for Troy Polamalu, but LaMarr Woodley appears to be uncovered in the middle of the field. It's helpful to the success of the play that inside linebacker Lawrence Timmons is sent on a blitz, and is too late to recognize the screen and hustle back into it. (Though he does make a valiant effort.)

Again, here's Jackson making his cut, set to pivot back to the middle of the field. Also, again, you can see the inner-most slot receiver - in this case, Parrish - hustling out to get a block on a second-level defender.

Remember Woodley being unblocked in a previous shot? Scratch that: a key to the play is the release of left guard Andy Levitre, who is responsible for getting out ahead of the play and taking out that uncovered defender. Meanwhile, Geoff Hangartner and Kraig Urbik (filling in for an injured Eric Wood in Week 12) are releasing, as well, albeit not as quickly.

In the last still, you can see Levitre lunging at Woodley's ankles. Woodley is a terrific football player, and does a great job of avoiding the block and staying alive to make a play by keeping his balance (even if he's on a knee). Jackson is forced to make a move. In other news, you can see Urbik beelining for safety Ryan Clark, and Geoff Hangartner - though he's currently focused on Woodley - has a beat on Anthony Madison.

This play is effective not just because of the way it's executed, but also because Jackson is such a slippery player in the open field. He gets around Woodley with ease, Urbik has effectively cut Clark, and Hangartner, as you'll see below, is about to plant Madison into the turf. 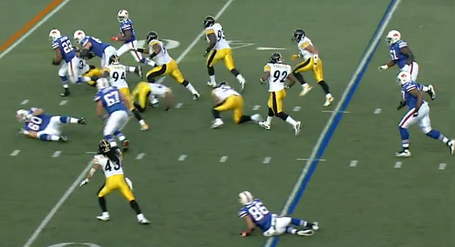 Boom. Off goes Freddy. Jackson got some great help downfield from his receivers - Evans, in particular, did a great job on Ike Taylor - but at this point, it was mostly individual effort on Jackson's part. William Gay wrapped his arms around him at the eight-yard line, and Jackson still scored it. 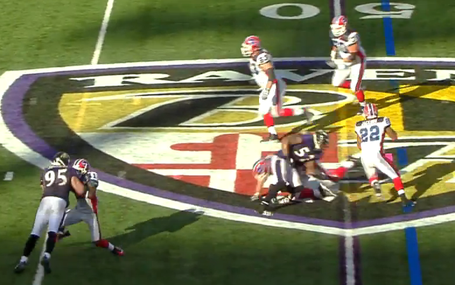 It was the same story in Baltimore from an execution standpoint. Parrish, running Nelson's route from the Pittsburgh game, gets a very solid block on Jarret Johnson. (Yes, as a matter of fact, Johnson does have 87 pounds on Parrish.) Levitre is once again out in front of the play, and here you can see him eliminating Ray Lewis. Up top, Hangartner and Wood are well out in front of the play... 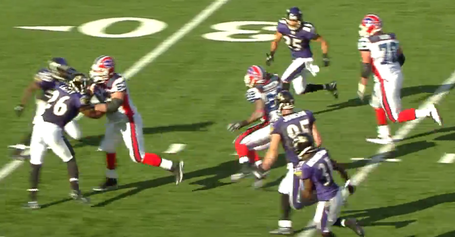 ... and that linemen duo quickly usher Jackson down the field for 21 yards. Jackson didn't even need to make anyone miss on the play, and in fact, couldn't - in the above still, he's about to be stopped by Ed Reed. Again, aside from the mistake in alignment, this play was actually the better-executed of the two plays.

It's worth repeating that the Bills ran this play at a very infrequent clip last season. There's a reason for it: this play is one that works very well for them, and they want to use it sparingly to ensure that it keeps working. NFL quality control coaches typically work in four- or five-week cycles to chart tendencies, which is why the Bills waited five weeks between calling this play - there's a good shot that Pittsburgh's coaching staff didn't see it on tape during their weekly game prep.