In Part I, we talked about how the Buffalo Bills' version of the 4-3 and 3-4 are essentially the same defense. Buffalo employs a version of the 46 defense that closely matches the 3-4/elephant defense they also use. In Part II, we'll look at the position responsibilities, how the team's current personnel fit, and which free agents and draft prospects are good fits for the Bills' system. 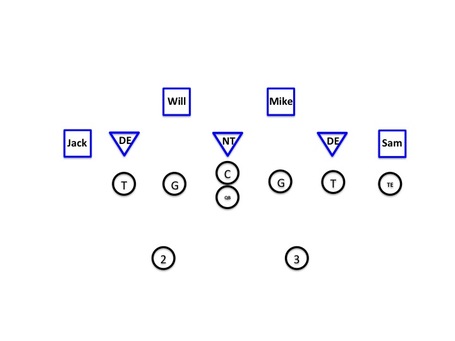 Here we see a standard 3-4 alignment. Buffalo plays two defensive ends and a nose tackle on the defensive line. The two outside linebackers are called "Jack" and "Sam," with the Sam aligned on the strongside of the defense. The inside linebackers are called "Mike" and "Will," with the Mike aligned on the strong side of the defense. After the jump, we'll break down each position individually. 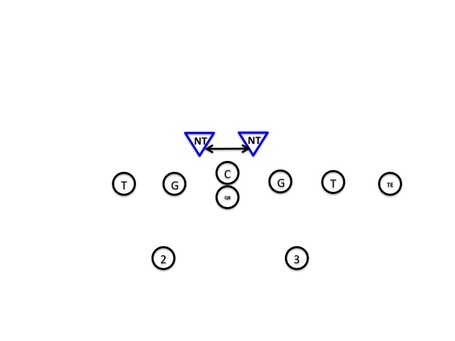 Currently, Buffalo's nose tackle is Kyle Williams. He's capable of operating as the nose tackle so long as Buffalo doesn't call for him to play head up on the center (zero technique) too much. When Williams is shaded to a side, or in the A gap, he's at his best. Williams is one of the league's best penetrating defensive linemen. Torell Troup is the reserve, and he's what Williams isn't. Troup's best position is over the center in zero technique, where the game turns into a wrestling match. That plays to Troup's best asset: his strength. Buffalo also has Kellen Heard, who can play nose tackle in a pinch, and Marcell Dareus is also a very capable nose tackle, a position he played for the second half of the 2011 season.

While Buffalo has a great deal of tackle depth, if Buffalo chose to pursue more depth in free agency, Jimmy Kennedy would be a good fit. In the draft, a nose tackle like Alabama's Josh Chapman would be a solid scheme fit. 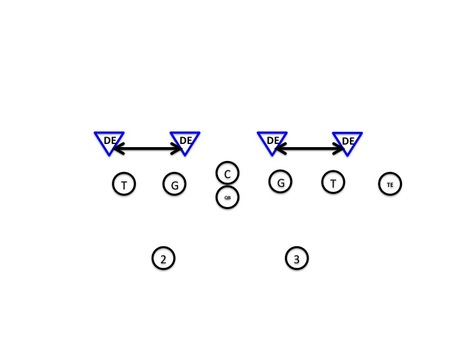 Buffalo asks its defensive ends to play from the outside shoulder of the offensive tackle to just inside the offensive guard. The ends have to be able to play head up on the guard or tackle and control two gaps, penetrate one gap, set the edge if needed, beat one-on-one blocks, and absorb double-teams.

Dareus' versatility is a huge advantage that Buffalo will enjoy in the future. Dareus is similar to Baltimore's Haloti Ngata in terms of scheme versatility, high level of play, and power. He can play the end position, and he can also play further inside than what the end position is asked to do. This ability allows Buffalo to flip Dareus and Williams in situations where the end is playing over or inside of the guard. This puts Dareus into the nose tackle position and allows Williams to penetrate.

Alex Carrington and Dwan Edwards are good fits for these positions. Carrington is more of a movement player, with the ability to penetrate gaps and rush the passer. His long arms are also an advantage in closing passing lanes. Edwards plays with more power and absorbs double teams better. Heard can play end and also absorb double teams and mans two gaps. Spencer Johnson is best used at the end position in one-gap schemes.

Buffalo needs four ends, and has three of them on the roster in Dareus, Carrington, and Edwards. Jarron Gilbert might be that fourth end, as well as Johnson. If Buffalo is looking for free agent depth, Cory Redding or Igor Olshansky could be signed. If Buffalo looks for depth in the draft, Derek Wolfe of Cincinnati and James Brooks of North Alabama are good mid- to late-round picks. 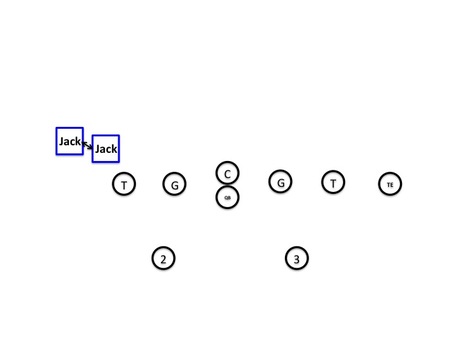 In Buffalo's scheme, the weak-side outside linebacker is called the "Jack" linebacker. For the sake of creating a mental model to work off of, when thinking about the Jack, think about a defensive end that sometimes drops into coverage. The best player at this position in the NFL is Dallas' DeMarcus Ware. Ware is almost always going forward, rushing the passer, but occasionally drops into coverage. This position is also where Shawne Merriman made a name for himself in San Diego.

The Jack linebacker has just a few alignment options. The Jack is positioned on the outside shoulder of the offensive tackle or the last man on the line of scrimmage on the weak side. The Jack is asked to keep contain, pursue the run on plays to the strong side, set the edge and force the play inside to runs to the weak side, and rush the passer. The Jack can play in a two- or three-point stance, and can position a half yard off the line of scrimmage if needed.

This position is Buffalo's greatest defensive need. In free agency, the prime target to man this position should be Mario Williams. The Jack position is what he learned to play in Houston last year, and got five sacks in five games. Williams should be atop Buffalo's wish list, since he's the best player at Buffalo's greatest need. If Buffalo can't acquire Williams, Cliff Avril would be a good alternative. Avril would have to learn how to play primarily on the right side, as he plays left end for Detroit.

In the draft, a group of highly regarded players fit the Jack position. All of the following players are college ends that excel moving forward, have enough size to match up well with offensive tackles, and can drop into short zones in coverage at times: North Carolina's Quinton Coples, South Carolina's Melvin Ingram, Clemson's Andre Branch, Illinois' Whitney Mercilus, Syracuse's Chandler Jones, Marshall's Vinny Curry, and USC's Nick Perry. I also believe that Alabama's Courtney Upshaw would fit Buffalo's scheme best at the Jack position, as his power is best used going forward. 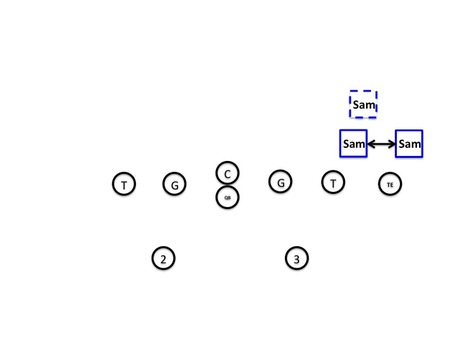 The strong-side outside linebacker is called the "Sam" linebacker. The Sam is essentially a big, traditional 3-4 outside linebacker that needs to do everything: rush the passer, keep contain, pursue weakside runs, set the edge on strongside runs, cover in both zone and man, and jam the tight end. LaMarr Woodley is currently among the best Sam linebackers in the league.

Note: If Dave Wannstedt integrates his traditional 4-3 scheme, the Sam will also need to play off the line of scrimmage in a similar role as the "Will" linebacker, whose responsibilities will be explained later.

Buffalo uses Kelsay at Sam, and he's not a bad fit. Kelsay can do everything the Sam needs to do except man coverage. He just isn't elite at any of the requirements. Kelsay is the type of player you'd like to see used as a reserve, getting 20-25 snaps a game to keep the starter fresh. If Buffalo can't find his replacement this off-season, Kelsay is an adequate starter at Sam for at least one more season. Batten is also a fit at Sam, though he's not as big and powerful as Kelsay. Moats could fit the Sam position once he learns more than rushing the passer.

Buffalo can certainly look to upgrade at Sam, though it's not the priority that the Jack position is. In free agency, Baltimore's Jarret Johnson is an ideal Sam in a hybrid defense. Johnson is essentially a more talented version of Kelsay. Dallas' Anthony Spencer is probably the most talented player available capable of manning the Sam linebacker position. San Francisco's Ahmad Brooks and Cincinnati's Manny Lawson would also be upgrades over Kelsay. Chris Gocong, Matt Roth and Rob Ninkovich are also available, though they aren't really upgrades over Kelsay.

In the draft, Dont'a Hightower is the best fit for this position. When Alabama used him as a pass rusher, he played on the strong side, and looked very good. Hightower is strong and capable of fulfilling all of the Sam requirements, including playing off the line of scrimmage in Wannstedt's 4-3. Upshaw could play Sam, though it might be a waste of his abilities moving forward and attacking. Smaller college ends with movement skills are also good fits at Sam: West Virginia's Bruce Irvin, Oklahoma's Ronnell Lewis, and Virginia's Cam Johnson would all fit at Sam in Buffalo's scheme. 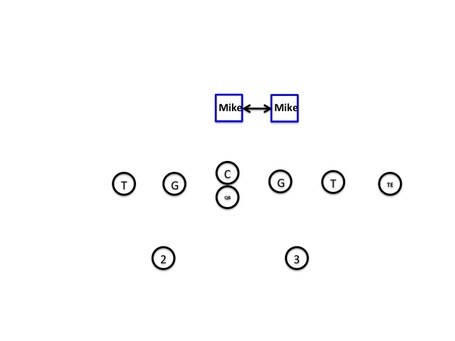 In Buffalo's hybrid scheme, the "Mike" linebacker transitions from the center of the offense to its strong side. The Mike is asked to take on guards when defensive linemen aren't in front of him, as well as flow to the football when he is covered by defensive linemen. The Mike linebacker needs to be strong enough to take on guards, as well as fast and mobile enough to chase down ball carriers. The Mike, along with the defensive end position not manned by Dareus, comes off the field in passing situations, and isn't asked to man cover often.

Sheppard is a good starter who is only entering his second season, so Buffalo should be looking for depth. Mike linebacker depth is best acquired through the draft, where the reserve can play special teams as well. If Buffalo chooses the free agent route, bringing back Mario Haggan would work. In the draft, USC's Chris Galippo is a bigger Mike linebacker that could be taken later in the draft. 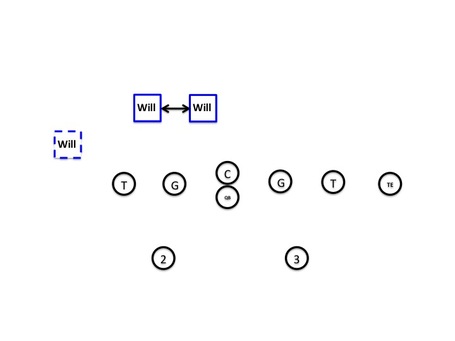 The "Will" linebacker in Buffalo's scheme is a cross between a Tampa 2 style outside linebacker and a 3-4 weak-side linebacker. The Will linebacker has to be able to take on blockers at times, but finds himself mostly playing in space with the ability to run and hit. The Will also must be able to cover running backs and drop into zone coverage. In certain schemes, the Will lines up outside the Jack and rushes the passer to blitz, or at least show blitz. Note that if Buffalo makes a wholesale change to Wannstedt's 4-3 scheme, the Sam linebacker will have many of the same responsibilities as the Will linebacker.

Nick Barnett is an ideal fit for the Will position. He's capable of taking on blockers, as well as flowing to the football. White is a better fit at Will than Mike, though he's not athletic enough to cover all backs or be a sideline to sideline defender. Moats also has the ability to play Will linebacker, since he can take on blocks well and is athletic enough to defend sideline-to-sideline. Moats' difficulty comes in pass coverages.

Like the Mike linebacker position, Buffalo should be looking for depth at the Will position. Kirk Morrison would fill the need well. Denver's Joe Mays is also a good fit. In the draft, Vanderbilt's Chris Marve would be a decent fit as a reserve. Florida State's Nigel Bradham would also fit as a reserve.

At times during the season, many fans - to include this author - thought the Bills were a couple outside linebackers away from being a good defense. Buffalo was aligning their Mike and Will linebackers wide, or aligning their defensive ends wide, to compensate for weak edge play. The addition of two good edge rushers could be the difference between a bad and a good defense. Edge rushers would allow Buffalo to focus on the center of the field, knowing their Jack and Sam linebackers would funnel outside plays back inside. The improvement should start and focus on the Jack linebacker. The Jack linebacker is the biggest need on the defense.