Share All sharing options for: Hypothetical: Buffalo Bills' Transition To A 4-3 Defense

If the Buffalo Bills transition to Dave Wannstedt's version of the 4-3 defense, what does that mean for the current personnel? It's always easier to transition from a 3-4 defense to a 4-3 defense than vice versa. Many of the players needed in a 3-4 are specialists for that defense. The nose tackle is the foremost example. Vince Wilfork, a true space-eating nose tackle in a 3-4 defense, can easily transition to playing defensive tackle in a 4-3. The reverse isn't always true. Rocky Bernard can't play nose tackle.

How would Buffalo's current defensive personnel fare in the transition? Better than you think. With the exception of some later-round picks and low-end free agents, everyone's got a home in a 4-3. After the jump, we'll look at how Buffalo's depth chart might change with a change to Wannstedt's 4-3. 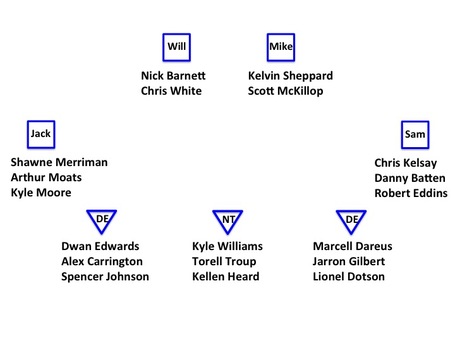 This depth chart is "close enough" to work with. It's got everyone in their spots from the past season, except Spencer Johnson. I listed Johnson at his more natural defensive end position. 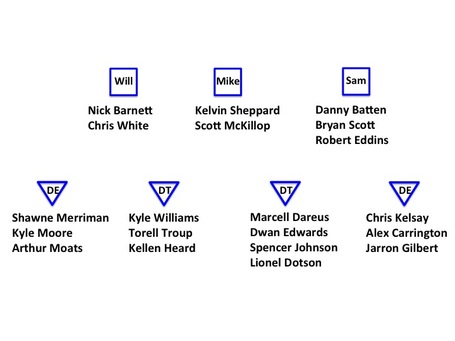 If Buffalo transitions to Wannstedt's preferred version of the 4-3, the Sam outside linebacker will play off the ball most of the time, flowing to the football. Everyone that's important in the current defense has a natural fit in the 4-3. Kyle Williams, Marcell Dareus and Torell Troup play more like 4-3 defensive tackles regardless, so the transition just codifies what they do already. Dwan Edwards is a stout 3-4 end, and he makes the transition to 4-3 end, providing good depth at defensive tackle. Johnson moves back to his more natural tackle position.

At left end, Buffalo has a decent platoon in Alex Carrington and Chris Kelsay. Carrington was tried at outside linebacker during training camp, and has the movement skills to play left end, particularly in conventional sets. Kelsay can replace him on passing downs. Jarron Gilbert provides depth.

Right end continues to be the problem that the Jack outside linebacker was in the 3-4. If Shawne Merriman is healthy, he's a force at this position. If not, Buffalo's left with Kyle Moore. Arthur Moats can replace him on passing downs. If Merriman isn't ready, the Moore-Moats tandum is less than inspiring. Right end replaces Jack outside linebacker as Buffalo's most pressing need.

In the 3-4, Buffalo had serious pass rush concerns, and needed to fill the Jack outside linebacker position. Buffalo needed an upgrade at Sam outside linebacker, and depth at end and inside linebacker. In the 4-3, Buffalo's most pressing need is someone to rush the quarterback, particularly from right end. Left end isn't the pressing need that the 3-4 Sam position was due to Carrington's potential shift. Depth at both defensive tackle positions and left end are excellent, and should allow Wannstedt to use the same wave concept he used in Dallas. The only pressing need that the transition opens up is at strong-side linebacker. Buffalo can platoon Batten and White there now, with Scott coming in on passing downs.

The biggest concern is that in terms of learning a system, it can be said that two years have been wasted. Chan Gailey couldn't have known that George Edwards' system wouldn't work when they hired him. The logic was actually to the reverse: that the NFL had moved to the 3-4, and Buffalo was getting with the times.

In terms of personnel, not much organizational energy has been wasted. Buffalo's most valued draft picks brought in defenders like Dareus, Troup, Carrington, and Sheppard. All four are good 4-3 fits. Free agents like Barnett and Edwards are also good fits. The shift may leave Moats and Batten without a position, but Buffalo shouldn't hesitate to transition because a couple of sixth-round picks won't be good fits. There's no guarantee that Merriman will be healthy, and even if he is, he can contribute at right end and as a situational pass rusher.

The move might position Buffalo to land some of the best free agent pass rushers. Mario Williams and Cliff Avril are natural 4-3 ends, and Buffalo's transition makes them more attractive to both. Think either wouldn't love to play next to Williams and Dareus? Avril saw exactly what playing next to Ndamukong Suh does for a sack total. Williams might want to get back to playing his natural defensive end position instead of outside linebacker.

If Buffalo does indeed transition to Wannstedt's traditional 4-3 defense, it does open up a hole at linebacker, but creates depth at defensive tackle and left end. The pass rushing need at right end isn't new. It's the same need that Buffalo had at Jack outside linebacker in the 3-4. All the defensive front seven personnel that Buffalo invested high draft picks in fit the 4-3. Most of the high dollar free agents fit the 4-3. Buffalo makes itself more viable to free agent pass rushers that desire to play in a 4-3. There's a lot more upside to this move than downside.