In their 52-28 Week 4 win over the Buffalo Bills, New England Patriots runners Brandon Bolden and Stevan Ridley combined for 243 yards and three touchdowns on 38 carries. What the heck happened to Buffalo's run defense?

The Buffalo Bills gave up 33 rushing yards to the Cleveland Browns and No. 3 overall draft pick Trent Richardson in their 24-14 Week 3 win. Seven days later, unheralded New England Patriots runners Brandon Bolden and Stevan Ridley combined for 243 yards and three touchdowns on 38 carries in a resounding 52-28 defeat for Buffalo.

So... what the heck happened? What did New England do that was so unbelievably flummoxing for Buffalo's defenders?

This first-quarter run saw the Patriots using three receivers, tight end Rob Gronkowski and a back. Buffalo countered with its nickel defense, leaving six players in the box. At the snap above, center Ryan Wendell blocks Kyle Williams (playing a one-technique) and right guard Dan Connolly pulls from the offense's right to left.

Wendell has sealed Kyle away from the running lane. Marcell Dareus is doing okay at the point of attack against replacement left guard Donald Thomas, and as Connolly pulls across the formation, he works to his right to try to eat up that pulling guard. Also note the positioning of linebacker Bryan Scott to reference for the next still.

As the guard pulls, Dareus gets onto Thomas' left shoulder and meets Connolly, drawing the double-team. Scott, meanwhile, has moved to his right a few yards to plug up the lane that the double on Dareus created.

Here's the problem, though: the running back isn't following the pulling guard (as you may have already noticed). There's a massive lane open in the gap to the right of the pulling guard thanks to a seal on Kyle, the double on Dareus, and an easy seal block by Rob Gronkowski on Scott made possible by the action of the pull. Nick Barnett is forced to make a nice open-field tackle to prevent an even bigger gain from occurring.

On this second-quarter run, New England came out with two tight ends, and slapped them both on the left side of the formation (they had two receivers to the right). Buffalo drops safety George Wilson down in front of the tight ends, giving them seven in the box. Everything looks nice and orderly here...

... and then things exploded. The Patriots block to the weak side of the formation, with no fancy pulls - just a slant to the right. Kyle is effectively cut by left tackle Nate Solder (perhaps while still engaged with Thomas, but it's borderline), Wendell and Connolly have Dareus doubled, and Connolly is in position to be able to come off his double and seal Barnett if possible. Mario Williams, you'll notice, has set the edge effectively.

Bolden presses the play hard to the right. Kyle is going to the turf, Dareus and Barnett are following the stretch action, and in the meantime, Thomas has gotten to the second level where he's prepared to eliminate Scott. Take a look at the size of that cut-back lane, folks. I, Brian Galliford, all 5'11", 180 pounds of me with my 7.1-second 40-yard dash time, could have picked up a chunk of yardage on that play. 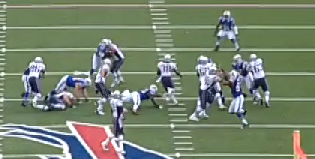 You wonder why Bills defensive backs continually had to make tackles like this? It started at the point of attack, where New England was flat-out dominant.

Again, New England comes out with two tight ends, two receivers and a back, but they line Daniel Fells up in the backfield in an offset I-formation. Once again, Buffalo has its nickel defense on the field (Chris Kelsay has supplanted Mario at left end), and they have six in the box against seven Pats blockers.

This is a run fake. Note the double-teams on both defensive tackles. Gronkowski has Mark Anderson, and Sebastian Vollmer gets Kelsay one-on-one. Fells, along with whichever of the double-teamers can get free, will be charged with second-level blocking responsibilities.

Whoops. The run's going to the left, Buffalo. Barnett and Scott were peeking at the misdirection; Barnett's flat-footed and Scott is about to get taken out by Fells, who delayed his second-level movement until the misdirection was executed.

Kyle's been tied up effectively by Thomas, so Solder rubs off in the hopes that he can get Scott and allow Fells to take on George Wilson. Barnett is the only box defender free, but he's playing catch-up thanks to the fake.

Fells is able to get up onto Wilson thanks to an effective Solder block on Scott. The Patriots very nearly get a blocker up into Barnett, but the tackle keeps things occupied enough to allow Barnett to make a tackle unencumbered. Otherwise, the Patriots had this blocked up extremely well - note Wes Welker beelining for Jairus Byrd - and may very well have taken this one the distance.

Sure, you can argue that the Bills should have been playing more base personnel looks against the Patriots' two-tight end packages. That's very valid. Of more concern to me, however, is the fact that the guys that were on the field - all of them talented enough to play the run effectively, even the nickel guys - were getting blown off of the football like they'd never played run defense before. These are massive rushing lanes against fairly common run play designs. New England executed. Buffalo did not. That, in combination with the curious personnel decision, is how things got so out of hand in the running game.