Buffalo Bills defensive tackle Kyle Williams told reporters on Wednesday that he's been fined $15,000 for a hit on Tom Brady in Sunday's loss to the New England Patriots.

In the third quarter of the Buffalo Bills' 52-28 loss to the New England Patriots on Sunday, defensive tackle Kyle Williams was flagged for a roughing the passer penalty as the Patriots were driving for a game-tying score. Williams told reporters on Wednesday that he has been fined $15,000 for the hit - and is not pleased about it at all.

"I don’t know," Williams said when asked what he's supposed to do on a play like that. "Other than let him throw the ball, I don’t know. I could understand if I dove at him head first and hit him, or hit him behind the legs and dove at him with my shoulder. But I hit him with my arm and I get a $15 thousand-dollar fine for hitting him with the ball. I don’t get it."

Williams also admitted that he's not surprised that he was fined - and frankly, he shouldn't be. Though the hit was clearly not made with ill intent, it was a blow to the knee area that caused Brady to go down awkwardly. No matter how he or the team spins it, it looked bad. 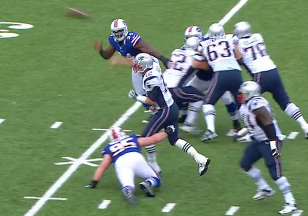 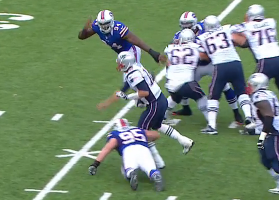 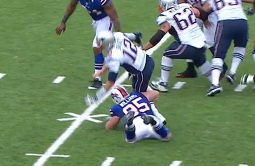 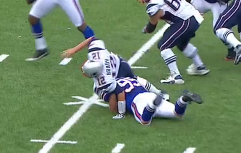 Williams does not dive directly toward Brady's knee (his entire body is in front of the plant leg), but as his right arm makes contact with Brady's calf, the momentum of his dive causes Brady's leg to buckle awkwardly, and the quarterback flops over Williams to his left and tumbles to the turf awkwardly.

Here's a closer view of the hit below. 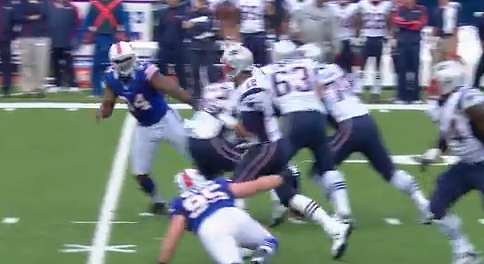 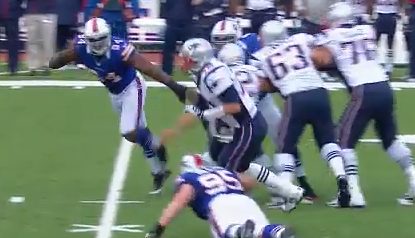 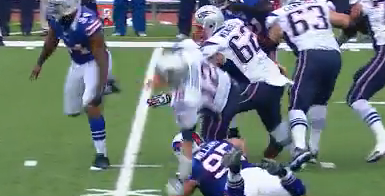 The NFL does not announce weekly fines until Friday, so it will be interesting to see if Patriots inside linebacker Brandon Spikes is hit with a fine for a vicious hit while blocking on an interception return that put tight end Scott Chandler out of the game. Chandler is 6'7", friends; you have to try pretty hard - and leave your feet, in Spikes' case - to get a shoulder into Chandler's chin. If Williams' hit was fine-worthy, then Spikes' was worth a lot more money.