The Buffalo Bills (2-2) travel out west to take on the San Francisco 49ers (3-1) at Candlestick Park in Week 5. This is Buffalo Rumblings' in-depth preview. Go Bills!

After just four weeks of the 2012 NFL regular season, there are not many teams on the map that are easy to figure out, and that includes a 2-2 Buffalo Bills squad that has been dominant at times and been dominated at others to this point in the season. An exception to that rule, however, may be the San Francisco 49ers; Jim Harbaugh's crew is 16-4 since the start of the 2011 regular season and have established identities on both sides of the ball.

These two teams are coming off of the opposite ends of lopsided defeats in Week 4. The 49ers traveled to the east coast and dominated a New York Jets team that has struggled mightily since Week 1, winning 34-0. Buffalo, meanwhile, opened up a 21-7 lead on the New England Patriots, only to witness the Patriots respond with 45 second-half points - 31 of them coming in the fourth quarter - and drop a 52-28 decision.

As such, this game is largely viewed as a matchup between two teams heading in opposite directions. That's why the 49ers are roughly 10-point favorites playing at home, and it's why most everyone expects the Bills to have an uphill climb in all phases as they try to improve their record to 3-2.

Buffalo has not played in Candlestick Park since 2004, when a Bills team led by head coach Mike Mularkey, quarterback Drew Bledsoe and running back Willis McGahee railroaded the 49ers 41-7 as quarterbacks Cody Pickett and Ken Dorsey combined to throw three interceptions. Not only was that the last time the Bills beat the 49ers (they've only played them once since then), but it's the last time the Bills won a game three hours to the west.

Since then, the Bills have been blown out by the likes of Oakland and San Diego (twice) - and you can count Arizona, who crushed Buffalo in the desert in 2008, in that list if you're so inclined.

They don't travel west very often, but this 49ers game is the first of two for the Bills thousands of miles from home. As such, the team will be staying in Arizona for the week following the game. Bills head coach Chan Gailey has talked about improving the team's "mental toughness" all week; part of that will be not allowing this 49ers game to be the first two of a grueling nine days out west. 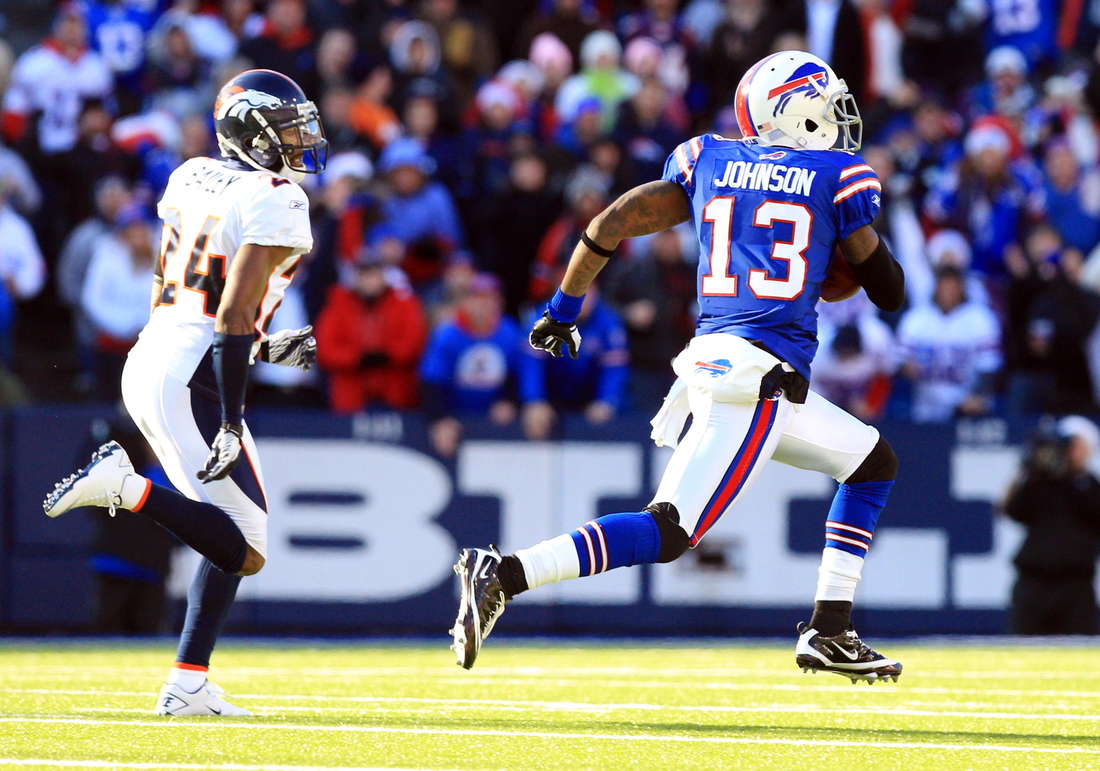 Right now, there is one major problem facing Buffalo's offense, and that's their propensity to turn the football over in bunches. 10 of the team's 11 turnovers came in their two losses to the Jets and Patriots, with a whopping six coming last weekend. In 36 games under Gailey, Buffalo has turned the ball over a ridiculous 80 times.

It therefore hasn't mattered that the Bills are the NFL's sixth-highest-scoring team, or that Ryan Fitzpatrick leads the NFL with 12 touchdown passes, or that Fred Jackson and C.J. Spiller may be the NFL's most versatile running back tandem, or that by and large the offensive line has looked like one of the league's better units. Even less relevant: the defense lining up across from them. In many cases, Buffalo beats themselves with turnovers before their opponents even get the chance to try their hand at winning the game.

The defense they face will matter quite a bit this week, however, because it is by far the most talented group that they've yet seen or are likely to see this season. From top to bottom, the 49ers have the best and most physical defense in football, and it starts with their elite linebacking duo of Patrick Willis and NaVorro Bowman. Their defensive line is excellent, their pass rushers (Aldon Smith and Ahmad Brooks) are very productive, and their secondary is both opportunistic and comprised of a group of big hitters. Don't expect a lot of big plays on Sunday, because the 49ers don't surrender a lot of them. They're that good. Don't be surprised if Buffalo's game plan this week is the most conservative plan you'll ever see out of a Gailey offense.

San Francisco is a run-first team, and everyone knows it. Buffalo couldn't stop the run to save their lives a week ago, so it's fair to expect them to come out really keying on improvement in that department. That opens up two options for the offensively-conservative 49ers: run the ball right away to test that run defense, or throw some play-action in early to get that Bills defense back on its heels.

That puts Buffalo's beleaguered defense in a bit of a bind, especially early in the game. If the Bills are able to contain the running game - and obviously, that's a massive "if," considering they gave up 247 rushing yards to New England last weekend - then it will simplify their approach and make their reads easier. If the 49ers establish the run early, however, they've got elite-level explosive receiving options in the venerable Randy Moss and tight end Vernon Davis.

In their two wins, Buffalo has successfully made their opponents one-dimensional. In their two losses, they haven't. The defense can't rely on an early lead the way they have in each of their two wins, either; in all likelihood, they'll need to handle getting the 49ers off balance themselves, lest they give the home team an early lead. The formula is simple - stop the run, pressure the quarterback, make plays - but the execution has been anything but for Buffalo.

What the Film Says

In their only loss of the season, the 49ers struggled to cover up a Minnesota Vikings passing game that featured Christian Ponder, Percy Harvin and Kyle Rudolph. Harvin, in particular, gave the 49ers a lot of problems (he had nine catches for 89 yards) - especially on little swing passes and short stuff that the Bills like to run. 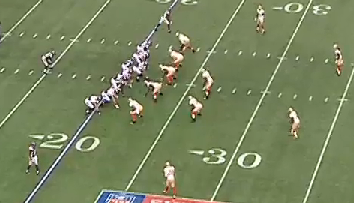 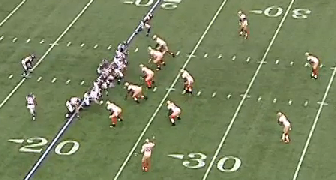 Harvin is lined up to the right side - the same side as two tight ends. The 49ers respond by shifting their inside linebackers to the strong side of the alignment. Ponder puts Harvin in motion to the left pre-snap, and Harvin just continues along that arc into the play, catching the little flare. (A play fake helped the 49ers linebackers stay rooted to the spot long enough to get the receiver open.) This play picked up 13 yards. 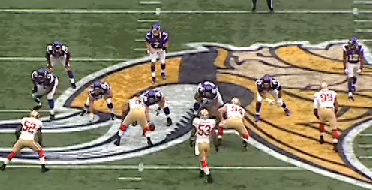 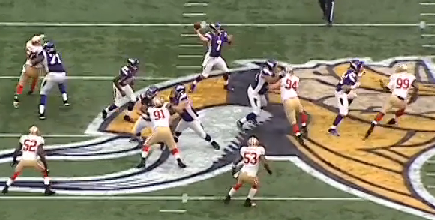 On this play, Harvin lined up in the backfield on the weak side of the formation. Again, you can see the 49ers shifting their defense to the strong side of the alignment, and at the snap, Harvin flares to his left a bit and catches a short pass. This play picked up 10 yards.

San Francisco got better at defending this type of play last week when the Jets tried them out, but the Jets don't have a player like Harvin or Spiller on their roster. Even T.J. Graham is capable of making a play out of this type of design. Don't be surprised if the Bills test this type of formation out early not just to see if they can pick up some easy yards out of it, but to help Fitzpatrick get into an early rhythm.

It's no secret that the Bills struggle to cover tight ends. Davis is just the latest in a long line of elite-level tight ends that the Bills have faced in the last year-plus, and make no mistake about it, Davis is the 49ers' big-play receiver. When the 49ers look to pick up a big play with the vertical pass, they're much more likely to get it from their ultra-athletic tight end than they are from, say, Moss.

Scott, the team's nickel linebacker and go-to man when a tight end that presents matchup problems is across the line of scrimmage, will likely be on the field quite a bit - even if the Bills don't run nearly as much nickel as they did a week ago when New England gashed them on the ground.

If there is a weakness to be exploited, however, it is on the left side of the line, according to David Fucillo of NinersNation.com. Buffalo's game plan will be to stop the run and force the 49ers to pass, and if they get to that point, Anderson and Staley will be the focal point of the Bills' pass rushing efforts. Two Bills defensive linemen (Mario Williams and Marcell Dareus) are playing at less than 100 percent, and Anderson has been the more consistent pass rusher of the two ends this year. If he can beat Staley often enough to disrupt Alex Smith, the Bills will have gotten somewhere defensively. 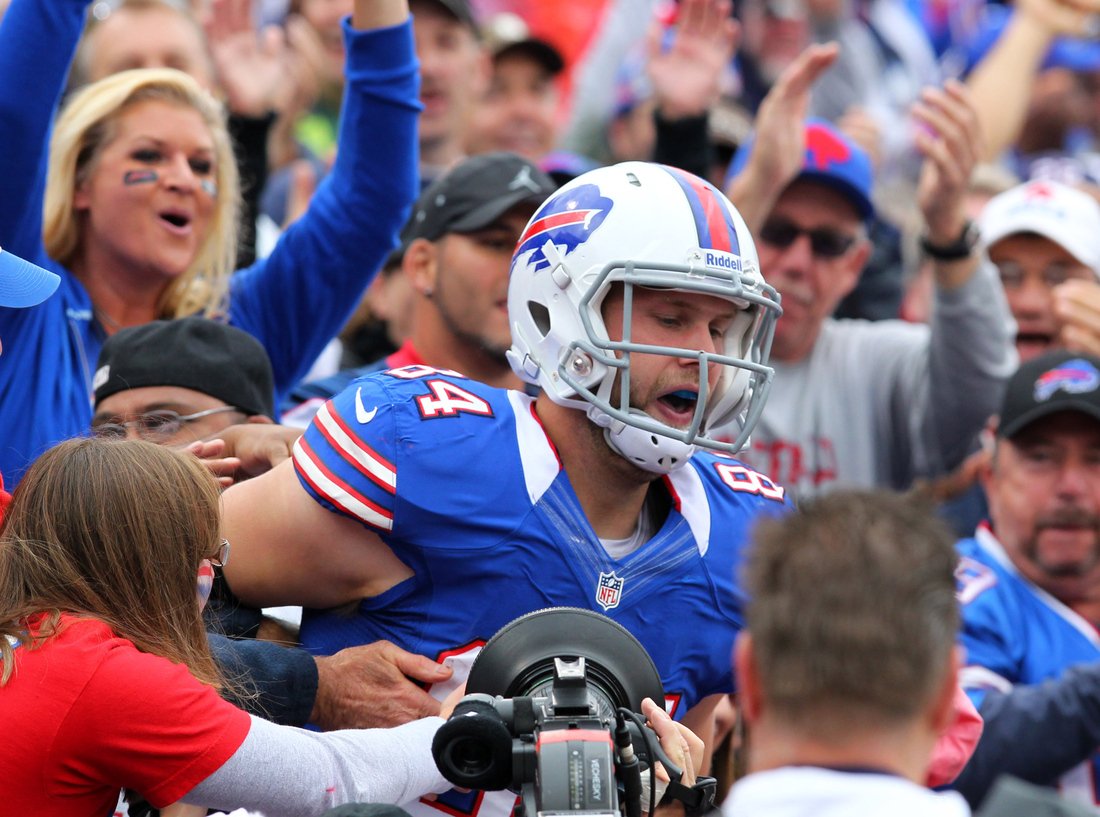 As ever, Buffalo's passing offense will be at its best if Fitzpatrick is spreading the football around (and, again, not turning the ball over). They'll try to get San Francisco native Stevie Johnson involved early, in all likelihood, and they'll try to run the football to keep things balanced. Chandler, however might end up being the "big play" receiver for the Bills in this game.

If the Bills can give Fitzpatrick time - which is a big if against San Francisco's front seven - then Chandler has proven that he can hurt defenses down the seam. He did it twice on two touchdown catches against the Patriots, and he's got a better matchup this week if the Bills can get him down the field against the former Bill in Whitner. It's not that Whitner is a liability in coverage; it's just that Chandler dwarfs Whitner, with a full nine-inch advantage on the former No. 8 overall pick. Look for Gailey to try to get this matchup via formations and shifts several times throughout the ball game. (Chandler has five inches on Whitner's running mate, Dashon Goldson, for the record.)

If Buffalo has any chance whatsoever of playing competitively on offense in this game, they'll need to hold their own against the 49ers' dominant defensive line and linebackers. Knowing that the 49ers will likely spend a lot of time in a nickel defense featuring four defensive linemen and the two aforementioned linebackers quite a bit, the team's best lineman, Justin Smith, will likely spend the majority of his day inside at defensive tackle.

There may be times when Smith lines up across from Chad Rinehart, the nicked-up right guard filling in for the injured Kraig Urbik. That... will be interesting. And, as always, Buffalo's entire interior line will simply need to control the point of attack. In the event that Smith is ever left singled up with Levitre, however, that's a matchup to watch, as it will give you a true gauge of how good Levitre is; Smith is the best at what he does.

In order to beat a team like San Francisco, you don't need a complex game plan - you need a simple one with a high level of execution. Buffalo, a team prone to horrendous stretches of inconsistent play early this season, will need to play a complete four-quarter game if they have any chance of picking up a road win.

Beyond that, it's all simple: take care of the football, run and stop the run, move the chains on offense, take away a dimension on defense, and make plays. It's to the 49ers' credit that they are able to defeat teams with such an old-school approach, as they're not necessarily a difficult team to prepare for. That's how talented they are. Buffalo will need to match San Francisco's intensity and physicality, then take care of their many weaknesses, in order to have a shot on Sunday.