The Buffalo Bills' comeback bid in yesterday's 37-31 loss to the New England Patriots came to a close when a Ryan Fitzpatrick pass intended for rookie wide receiver T.J. Graham was intercepted by Devin McCourty. After the game, both players took the blame for the game-ending pick.

"That was a rookie mistake. I was supposed to cross his face in the front," Graham told reporters Sunday afternoon. "It was a good pass. If I went across his face, I probably would have made a play, so I take the blame for that one. That was my mistake. It might be why I don't get on the field much. I can't make those mistakes."

When Graham says "cross his face," it's a literal translation: he was supposed to run in front of the safety, rather than behind him. New England dialed up a Cover 2 coverage in the red zone. Graham ran the right route, but at the wrong depth; on a longer-developing play out of the red zone, he'd have that second window between the safety and the middle linebacker. Instead, Fitzpatrick threw to the goal line, where he expected Graham to be in front of the safety. See the still below for how Graham was expected to run his route, and note that had he been where he was supposed to be, he either makes a catch or prevents the easy McCourty pick (on a high Fitzpatrick throw, mind you): 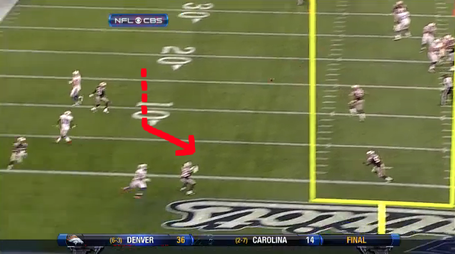 Fitzpatrick nearly threw his young receiver under the bus, but stopped short and took the blame himself, noting that a lack of sufficient communication helped lead to the play's outcome.

"We would have had a better chance at it, but that's something ultimately that falls on me, just in terms of getting things communicated, being on the same page and all of that," Fitzpatrick said post-game. When asked if he made the right read and saw McCourty: "Yeah. I mean, they were playing Cover 2, he was the deep-half safety. I thought I'd be able to get T.J., and wasn't able to get him."

Fitzpatrick finished the game 27-of-40 for 337 yards with two touchdowns and the interception. Graham had one catch for 11 yards.