Bills vs. Dolphins: Fred Jackson Out With Concussion

Buffalo Bills running back Fred Jackson has been diagnosed with a concussion and will not play in Thursday night's home game with the Miami Dolphins.

Share All sharing options for: Bills vs. Dolphins: Fred Jackson Out With Concussion

Buffalo Bills head coach Chan Gailey told reporters on Monday that running back Fred Jackson will not play in Thursday night's home game against the Miami Dolphins after having been diagnosed with a concussion. Earlier this morning, Gailey would only go so far as to claim that Jackson was suffering from "concussion-like symptoms".

Jackson was injured on Buffalo's final offensive drive of yesterday's 37-31 loss to the New England Patriots. After catching a short pass over the middle, Jackson raced toward the left sideline, where he was first corralled by a Patriots tackler, and then hit in the head/neck/shoulder area by linebacker Brandon Spikes. You can see a still of the hit below: 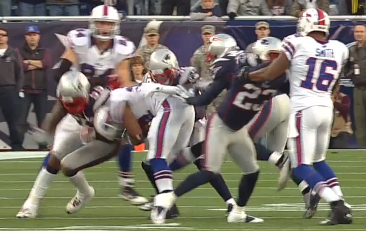 As Jackson left the field with the assistance of trainers, the ever-classy Spikes flexed his muscles, as seen below. He had been celebrating the fact that Jackson had fumbled on the play as the running back lay injured; Eric Wood recovered the fumble for the Bills, and possession had already been ruled Buffalo's before the below moment occurred. 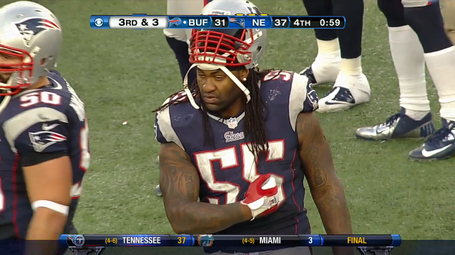 With Jackson out of the lineup for Thursday night, C.J. Spiller will almost certainly see a dramatic increase in both playing time and overall touches, with Tashard Choice serving as a change-of-pace back.