Author's note: I wrote this story without being aware of Buddy Nix's comment that Mario Williams will play left end. While that means that my positioning of Williams in the models is incorrect, the effect will be the same. Teams will still have to "pick their poison" on who to double team.

The addition of Mario Williams to the Buffalo Bills' defensive line creates a dilemma for opposing blocking schemes. The new "Williams Wall," consisting of Mario and Kyle Williams - along with Marcell Dareus - limits those blocking schemes.

The trickle-down effect means that opposing offenses will therefore be limited. With five blockers and four defensive linemen, who does the offense double team and, more importantly, who does it single block? If the offense chooses to double-team more than one Bills defender, it takes receivers out of the passing game. That's the dilemma: to double-team and reduce receivers, or not to double-team and risk losing one-on-one match-ups along the line. This is obviously a good problem for the Bills to have.

The models presented after the jump are simplistic, and cannot possibly cover the innumerable scenarios when everything the offense and defense can do are accounted for. I fully appreciate the chess-match that offensive coordinators will play with Buffalo, taking advantage of situations where they can. I also understand that some opposing offensive lines will be good enough to account for Buffalo's defensive line, at least some of the time.

The point of the models is to show how, in general, offenses are going to have trouble with a healthy Buffalo defense. The models account for pass blocking only, but it should be evident that the problems blocking the Bills will also translate to the run game. The models also don't account for blitzing linebackers, but the difficulties blocking the Bills' defensive line will make it clear that a well-timed blitz will be one of Dave Wannstedt's major weapons this coming season.

For the models, Mario Williams is playing right end and wearing No. 97. Chris Kelsay is at left end wearing No. 90. Whether Mario Williams lines up at left end or right end is not particularly relevant. The blocking schemes are going to have the same difficulty no matter which side he lines up on. The rest of the numbers reflect current Bills defenders. For the offense, we'll use the New England Patriots, since most Bills fans are very familiar with their offensive personnel. The tight end is Rob Gronkowski, "2" is BenJarvus Green-Ellis (yes, he's a free agent), and "3" is Aaron Hernandez. The offensive formation is simplistic, but the effects of the Bills defense will be samilar regardless of where they line up. 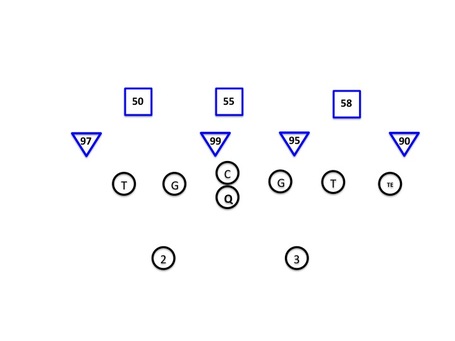 Here we see Mario lined up wide against the left tackle, with Dareus over the center, Kyle playing three-technique, and Kelsay outside Gronkowski. The linebackers, from left to right, are Nick Barnett, Kelvin Sheppard and Kirk Morrison, and they are playing in fairly normal positions for a Wannstedt defense. This formation is the Bills' 4-3 base defense. 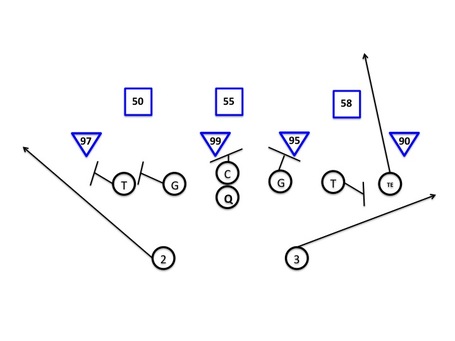 The Patriots slide their left guard, Logan Mankins, to help their left tackle block Mario. Gronkowski, Hernandez, and Green-Ellis all run pass routes. In this blocking scheme, the Patriots are making the assumption that the single blocks will neutralize Dareus, Kyle, and Kelsay. If any of those three players beat their block, they have a fairly clear route to Tom Brady. A quick pass would be advisable, but quick passing also limits the routes that the receivers can run. 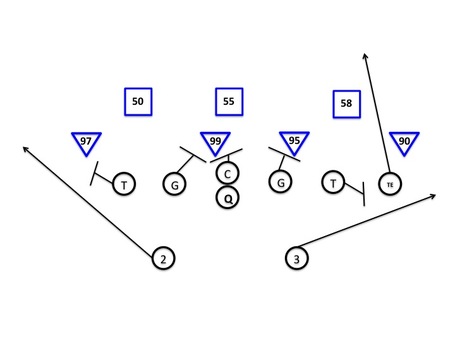 If Dareus improves into a dominant defensive tackle as expected, he will beat enough of the center's blocks to require that the offense doubles him. In this case, the same problems exist for the offense. Dareus should be neutralized, but the other three linemen are single-blocked. That is a risk, considering the ability of Mario and Kyle to beat blocks off the snap.

NOTE: I'm choosing to use Dareus as the first defensive tackle to require a double team over Kyle. The scenario could be easily reversed, with Kyle requiring a double-team first. In the remaining models, flip 99 for 95, and the result is the same. 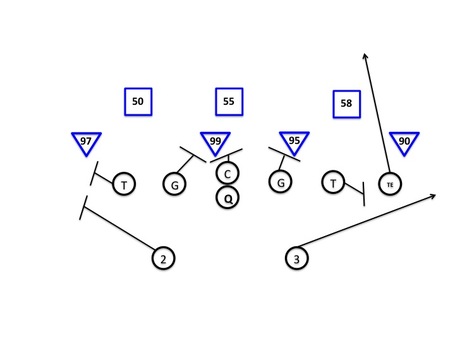 If Mario beats enough single blocks, the Patriots will have no choice but to chip block him. In this case, the Patriots double team Dareus, and use Green-Ellis to chip Mario. Once the offense starts to use receivers as blockers - even chip blockers - the job of the linebackers and secondary becomes much easier. In this situation, the Bills are coving five receivers with three linebackers and four defensive backs. With Green-Ellis chipping, Barnett can easily keep the runner in front of him. Green-Ellis won't have time to both chip and get out into a pass route, making him almost solely a check-down option for Brady. The Patriots can now only get four receivers into deeper pass routes.

Patriots Forced to Double Team Both Dareus and Mario 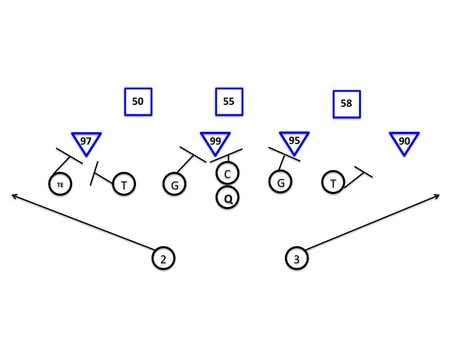 If Mario and Dareus are beating single blocks, or single blocks with chips, the Patriots will have to double both of them. To both double Dareus and Mario, the Patriots have to keep a receiver in to block. In this case, it is Gronkowski (though it could easily be Green-Ellis or Hernandez). To keep Buffalo linemen away from Brady, the Patriots need to completely take a receiver out of the passing game. Buffalo now has to cover four receivers with seven defenders. 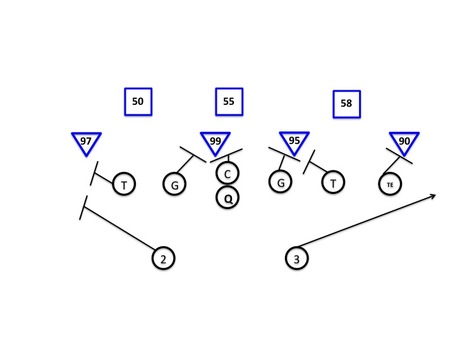 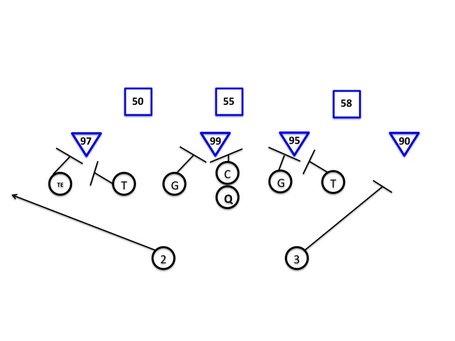 In this scenario, Mario has beaten the double team provided by Green-Ellis, forcing the Patriots to flip Gronkowski to the left side of the offense. The risk here is evident: Hernandez is now pass blocking a defensive end.

Summary: Unless the opponent's offense goes nearly exclusively into a short passing game, there aren't any good options for blocking a healthy Buffalo defensive line. To stay in a base offense, the opposition needs to be able to single block two of Buffalo's best defensive linemen consistently. That's a risky proposition. More likely, offenses are going to have to run more than pass in an attempt to grind down the defensive line. That's why Buffalo needs to keep depth on its line. Players like Shawne Merriman, Torell Troup, Alex Carrington, Spencer Johnson and Dwan Edwards need to rotate in to keep the starters fresh. Wannstedt's undersized defensive lines 20 years ago in Dallas stopped the run by rotating seven defensive linemen. Buffalo, though far bigger, needs to do the same. The rotation reduces the effectiveness of the running game, putting the offense right back into the double-team dilemma. None of these models takes into account blitzing. Buffalo shouldn't have to blitz much, but when they do, you can see the free run the blitzer could have.

Times have changed for Buffalo's defense. Offenses used to regularly put up yards and points on Buffalo, only worrying about Kyle and Dareus - and, to a lesser extent, Jairus Byrd. With Kyle healthy and Mario in a Bills uniform, Buffalo will starting dictating play to the offense. Offenses won't be able to use their entire playbook at will, as in the past. They will have to make conscious blocking decisions, either reducing risk by keeping receivers in to block, to taking risk with single blocks. Relish this situation, Bills fans. If everyone stays healthy, and Buffalo retains their line depth, we know what is coming.