Over the past couple of days, I've spent a lot of time talking about Buffalo Bills defensive lineman Alex Carrington off-blog. First came an email from a reader arguing that the Bills should be playing Carrington at defensive end in the new 4-3 defense, as opposed to defensive tackle; then came a (couple of) Twitter conversation(s) earlier this afternoon involving Chris Trapasso, Matthew Elder and myself, with Carrington again as the subject.

I'd planned on discussing Carrington as part of our Buffalo Bills Re-Watch series here, and the aforementioned emailer asked me to break down Carrington's two career sacks on the blog, as he noted that both of those sacks came when Carrington was playing defensive end. Let's kill two birds with one stone, why don't we?

After the jump, we'll take a look at Carrington's two career sacks, and then I'll talk a little bit about some notes I had on him from his extended playing time as a starter at the end of the 2011 season.

Carrington's first career sack came against the Pittsburgh Steelers during his rookie season of 2010. On this play, the Bills were lined up in a nickel package with four down linemen, and Carrington was playing left defensive end. 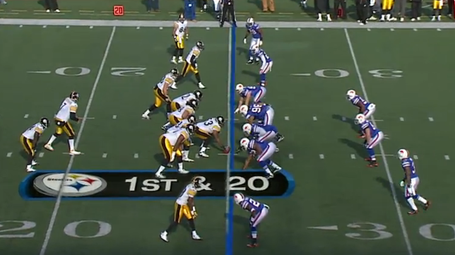 Prior to the snap, free safety Jairus Byrd moved up towards the line of scrimmage, eventually settling in next to Carrington and effectively becoming the fifth member of the pass rush. 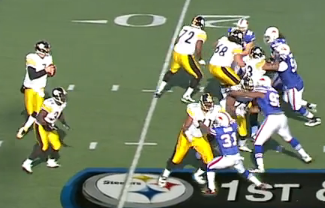 The major effect that Byrd's pre-snap movement had on this play was that he was picked up by Pittsburgh's right tackle, leaving Carrington in a one-on-one matchup with right guard Ramon Foster. Byrd would eventually abandon his blitzing and get off his block to cover running back Rashard Mendenhall, but the damage was done - Carrington was in a favorable matchup. 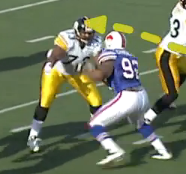 Carrington used a pretty nifty move on Foster to beat the block and pressure Ben Roethlisberger quickly. He started with a jab to the inside, then crossed Foster's face moving to his left (Foster's right), showing off solid quickness on the move. 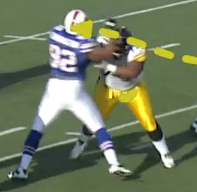 Carrington moved left quickly, his right arm swimming over the top of Foster to get into the backfield. It was an impressive play made possible by the play call's design and a good matchup. His second career sack, which came in a Week 9 loss to the New York Jets last year, was not as impressive in the fact that it was much more Jets breakdown than anything Carrington did.

On this play, the Bills were in their base 3-4 personnel, but Carrington was lined up to the outside of the right tackle in much the same way a 4-3 defensive end lines up. This was the secret to Buffalo's 3-4 over the past two seasons: it wasn't even really a 3-4.

At the snap, you can see the Jets' right guard move quickly to his left to get a double-team on Marcell Dareus. Dwan Edwards and Spencer Johnson draw one-on-one matchups, and the Jets leave a backup tight end in to handle Danny Batten by himself. That double on Dareus left Carrington one-on-one against right tackle Wayne Hunter.

To Carrington's credit, the thing he did right on this play was, seemingly, quickly diagnose the play as a pass, even though as he began upfield the Jets were executing a play fake. Here's where things fell overwhelmingly in Carrington's favor, however: Hunter was putrid on this play. That screen grab above? That's the closest Hunter came to blocking Carrington on this play. He stepped to his right, Carrington was moving inside the whole time, and Hunter simply misread his assignment and whiffed trying to recover. 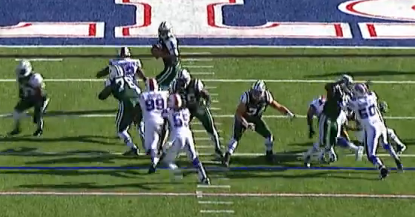 Carrington had it easy on this play: he pretty much ran straight upfield past a baffled right tackle, and by the time Mark Sanchez was done executing his play fake, Carrington was closing in a hurry.

When I watched Carrington during the latter stretch of the 2011 season, I saw a player that routinely struggled to get off of blocks. He played both outside and inside, but really didn't make much of an impact at any point during that string of games where he started. His role seemed to be more along the lines of block occupying (blockupying?), rather than attacking upfield. That's what he was drafted for: five-technique ends clean up blocks for linebackers to make plays, rather than getting upfield and trying to make plays themselves.

I'm sort of intrigued to see how Carrington fares in a defense that will, far more frequently, ask him to attack. He hasn't done much of it through two seasons, and there's not a lot out there to suggest that he'll be good at it at the pro level. In college, he was an excellent defensive end, but I don't think he has the range to play 4-3 end in this league in non-specialized packages. On the other hand, I'm also a bit concerned about how Carrington projects as a tackle on run downs, because he's not the most astute block-shedder. To me, his upside with Dave Wannstedt is as an interior pass rusher, where his solid (not spectacular) quicks, length and strength could make him a handful for guards.

Like pretty much every other non-starting defensive lineman the Bills employ, however, Carrington has an awful lot to prove.