This past weekend, we had a brief discussion about how Buffalo Bills defensive end Mark Anderson has been likened to wide receiver Stevie Johnson. Both players, at least in the eyes of head coach Chan Gailey and quarterback Ryan Fitzpatrick, do their jobs effectively in unpredictable, so-called "unorthodox" fashion.

That post prompted reader Jimmy to submit the following question via email: "What does that mean, exactly? I get the whole 'being in a certain spot at a certain time no matter how you get there' thing, but what does that look like? What little things are Stevie and Mark doing that allow them to 'freelance' on the field?"

I'm going to do my level best - within the limits of our current medium (and focusing solely on Johnson) - to explain what this means after the jump. Fair warning: this will be a lot like trying to explain the comings and goings of a knuckleball with a few screenshots.

In the end, however, I think the knuckleball analogy is the best one to describe Johnson's route-running tendencies (though the "one-on-one basketball" analogy works quite well, too). Knuckleball pitchers throw knuckleballs not just because they're good at it, but because they may not be able to throw more traditional pitches at the same level as other pitchers. It's the same with Johnson: he's not a fast accelerator nor a top-end speed guy, so he makes do with quickness and creativity as he's trying to get open.

My favorite Johnson route from the 2011 season came in the Bills' Week 2 win over the Oakland Raiders, which you can see right at the beginning of the YouTube video embedded below:

This was referred to by the color commentator as a "jerk" route - named so because a defender is made to look like a jerk when trying to cover a good receiver - but it's run by Johnson almost like an abbreviated "7" route, which involves a fake to one side and a break to the other, though usually much further down the field. Most jerk routes involve a receiver using speed hesitation (stop and go, if you will) to create separation on a shallow cross; Johnson's move to get open is almost like a basketball post move, involving a pivot. 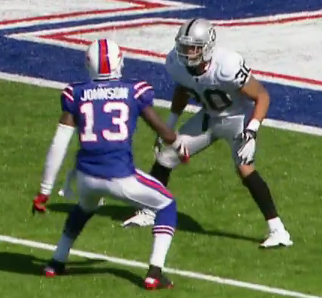 Johnson, lined up in the slot against a soon-to-be-overwhelmed safety, runs forward a bit, stops, and then pivots backwards on his right foot. 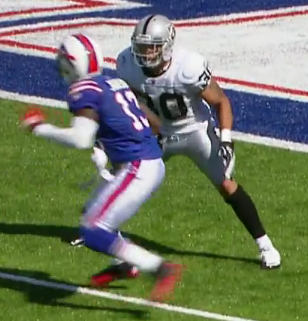 Johnson does a complete 180 as he pivots, turning his back first toward the home sideline, then to the back of the endzone as he turns to face Fitzpatrick. 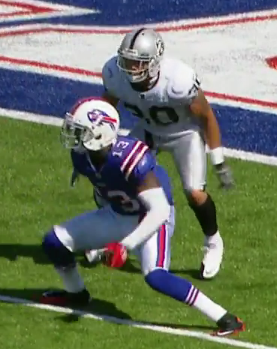 As he plants hard on his left foot, gaining momentum, Oakland's safety sneaks to his left. But we all know Johnson is not going left. 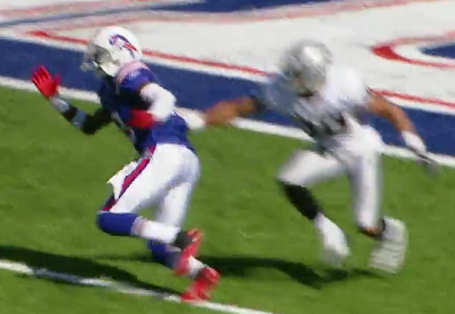 Boom. Johnson's toasted the safety with a drop step move you're likely to see basketball big men perform in the post, and this was one of the easiest touchdowns the Bills scored all season. 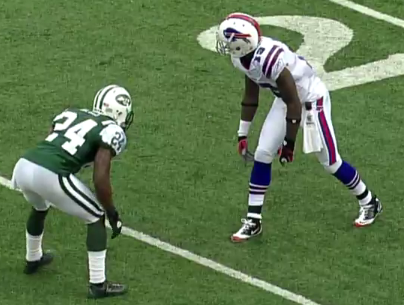 We all know that Johnson has had a good amount of success against New York Jets all-world cornerback Darrelle Revis, as well (he had 11 catches for 159 yards and a touchdown against the Jets last year). The reason? Johnson's route-running, like a pitcher's knuckleball, is difficult to prepare for. You may know what's coming, but you're still left reacting to the chaos. 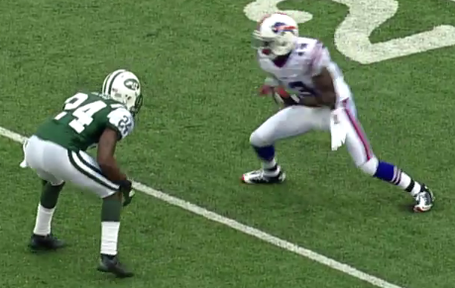 One of the reasons Johnson so excels at getting off of the line against press coverage is that he'll often flatten his stance at the snap, taking a step backwards or to the side rather than striding upfield like most receivers would. In the still above, you can see him flatten his stance, keeping Revis on his toes at a safe distance. 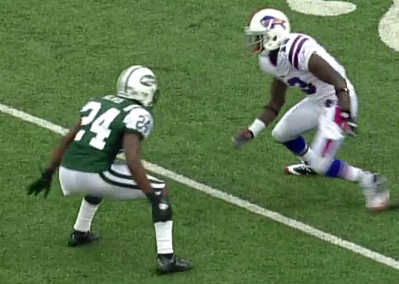 The play shown in this series of stills was a simple slant route that gained eight yards - a pretty ho-hum play in today's NFL. Johnson didn't run this like a slant, though - and if he had, Revis would have been all over the route like stink on cheese. Johnson challenged Revis vertically, bobbing and weaving left and right, varying his speed and throwing in some cuts and head fakes to keep Revis at bay. 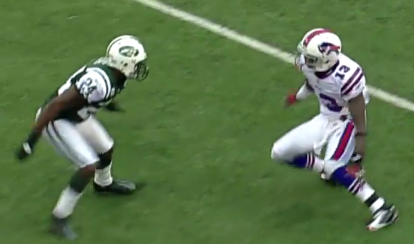 Finally, a juke to the left gets Revis turned enough toward the sideline (note the corner's feet) that Johnson can slant inside to his right for an easy completion. Note, also, that Johnson has only traveled three yards up the field in his route - and it took him a solid two seconds to get there as he used short, choppy footwork and the aforementioned bobs and weaves to get there. The color commentator for this game noted Johnson's excellent patience as he created separation. 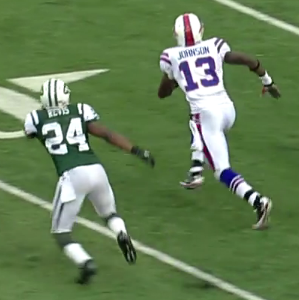 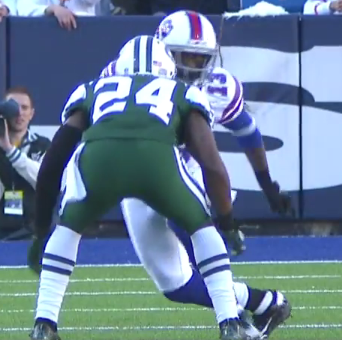 On this last play, Johnson burned Revis deep for a 52-yard gain in the Bills' Week 9 loss to the Jets. Here again, you see Johnson's unique way of getting off the line - his first step, with his right foot (which was ahead of his left prior to the snap), is to sink it back and to the left before heading upfield and to his right. Immediately, he's changed the angle at which Revis has to play him. 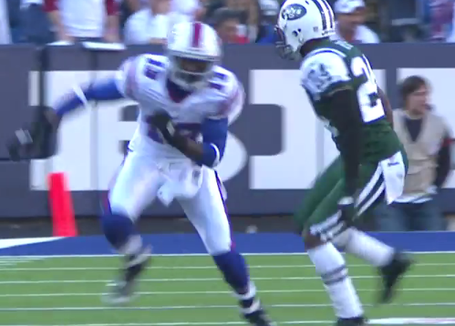 Revis is a much more talented natural athlete than Johnson is, however, so even as Johnson avoids contact in getting off the line, Revis is still all over him like a wet blanket. Johnson throws in a quick little juke as he gets vertical - the color commentator referred to it as a "wobble" - to get Revis' feet flat and create separation down the field. 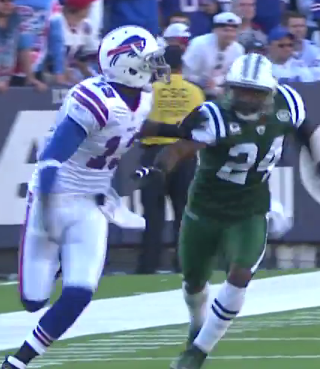 Like any good receiver, Johnson has also learned a little nuance as he's gained experience. This is not unorthodox for an NFL receiver, but Johnson did use his hand to not only keep Revis' hands off of him, but gain a little extra space vertically as Fitzpatrick delivered a perfect throw down the right sideline.

This is just the tip of the iceberg, Bills fans, and I promise you that words don't do Johnson's route-running justice. To get a full understanding and appreciation of how Johnson gets open, you'll need to hit the video. It'll be worth your time, I assure you, if you're into this sort of thing.

The important thing to remember about Johnson isn't so much that he's "unorthodox" - that word is already getting tired. Johnson is unique in the same way a knuckleball pitcher is unique: he's difficult to prepare to to defend (or hit, as the case may be). You can study him up, learn his tendencies and figure out where he likes the ball, but when you get out on the field, you're still not quite sure where that pitch, or that receiver, is going to dart next.