Over the past couple of days, a lot has been made about the fact that May street free agent signing Dorin Dickerson has been running with the Buffalo Bills' first-string offense at OTAs. A highly athletic 6'2", 227-pound H-Back type that can line up at tight end or fullback, Dickerson has the look of the prototypical Buddy Nix and Chan Gailey "find" that can come and help the Bills in a specific way.

I've been asked about the potential role Dickerson could play from several different angles, with one being most prominent: that Dickerson's role is "new," and adds "another wrinkle" to Gailey's offense.

I wouldn't call Dickerson's role "new," but he is a brand new player type on Buffalo's roster. Gailey doesn't have to design anything special for him, because he can be practically applied to the existing system. It's Dickerson's versatility in doing so that adds layers to the offense, not anything specifically designed for him.

When Dickerson was signed, my mind drifted to two memorable plays from the Bills' Week 1 win over the Kansas City Chiefs a year ago - plays that featured slot receiver David Nelson and tight end Scott Chandler as key elements to the designs. We'll start with Nelson's play, explained briefly below. 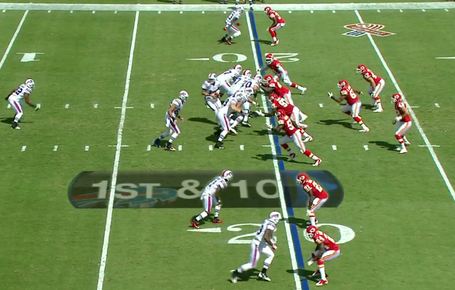 Nelson lines up in the slot to the right. He motions pre-snap to the formation's left, then reverses track and goes back to the right. He's lined up behind right tackle Erik Pears at the snap.

Nelson goes to the ground as if he's going to cut block the defender on the edge of the alignment during a play fake. The cut leads the safety in the box to key on a run, and with the line slanting left, Jackson has a clear cut-back lane right into the safety's lap...

... but hey, it's not a run at all. Nelson's back up off the ground and running an out route along the line of scrimmage. It's an easy completion for Ryan Fitzpatrick thanks to the safety being out of position, and Nelson picked up a solid 16 yards on this play.

The most critical thing to understand about Gailey's offense is that it is complex, but not in the sense that it's got a ton of plays. It's complex in that it allows the team to execute its "bread and butter" plays from a variety of different personnel packages, which helps the team disguise what it likes to do best to a certain extent. This Y/Z slip screen is a play that the Bills run quite a bit, but out of different personnel groupings and with different targets in mind.

Dickerson is capable of running this type of play, as he's a feasible blocker and an excellent route-runner. He also adds a wrinkle to the play in that he can line up in either slot, at tight end or at fullback when the huddle is broken, and then motion into position from any of those spots prior to the snap. This is the hallmark of Gailey's offense, and Dickerson can slide right in without needing anything new designed for him at all.

The same is true of the next play, as well. 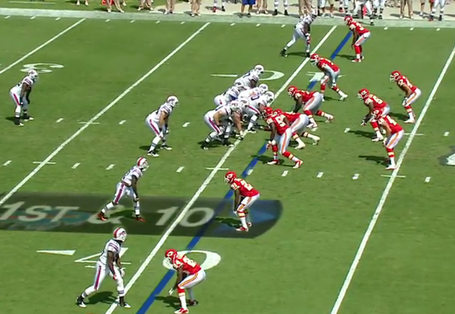 Here, the Bills are lined up with two receivers and Chandler to the right, with Chandler lined up off of the line much like Nelson was in the previous play (though he did not motion to get there). Ultra-important note: this formation is identical to the Nelson play shown above, but instead of a 4WR/1RB personnel package, it's a 3WR/1TE/1RB package. On this play - a designed run to the left - Chandler will act as a lead blocker pulling to the left. 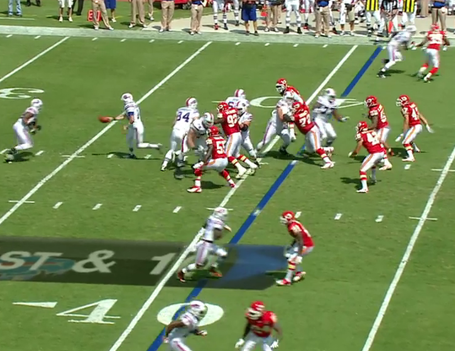 Chandler is pulling to the left here (along with right guard Kraig Urbik), with his duty to get to the second level and engage a player there. 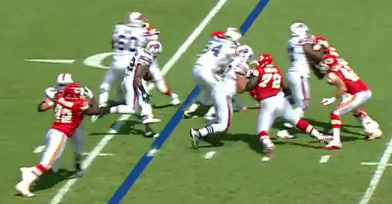 Chandler has executed his assignment well. The Bills got much more out of Chandler as a blocker when they used him in this fashion; when Chandler was lined up on the line of scrimmage, he had much more difficulty sustaining blocks and playing with leverage thanks to his height and length. With a head of steam, Chandler's an efficient blocker. Dickerson can be utilized similarly: he's not big enough to consistently sustain blocks on the line, but with a head of steam, he can be efficient.

Again, the point here is to note that Dickerson has the ability to do what Chandler did on this type of play. As a more versatile player type than Chandler, however, he can line up in a variety of different positions and get into the right spot pre-snap to execute the same assignment. This is the potential that Dickerson brings to Gailey's offense: he applies to the system as it exists, and adds layers to it, rather than bringing something completely new. This is how Dickerson has the potential to stick on the team without Gailey having to waste time drawing something unique up for him.

Keep in mind, however, that we are purely talking theory here. Theory is one thing; performance is another, and Dickerson will need to prove this summer and in pre-season action that he is capable of performing various duties at a high enough level (and that will undoubtedly include special teams, as well) to earn a roster spot.