Share All sharing options for: Why Buffalo Bills WR David Nelson Is Mistaken For A Tight End

On several occasions during the 2011 season, lanky Buffalo Bills slot receiver David Nelson was labeled a tight end by whatever television broadcasting team happened to be calling the team's game that week. Nelson was having a break-out start to his second season, and only after a few weeks did broadcasters seem to cotton on to the fact that Nelson is, by trade, a wide receiver.

Last night, I received three emails from readers borderline apoplectic with rage that a CBS Sports preview of the Bills' upcoming season once again called Nelson a tight end. I'm going to go out on a limb and guess that Pete Prisco's prediction of a 7-9 record was the motivating factor for the bulk of the rage, but for whatever reason, my emails focused on Nelson.

From this point forward, no Bills fan should ever be surprised when Nelson is called a tight end. In Chan Gailey's offense, that's often exactly what he is.

More accurately, Nelson is very frequently the "Y" receiver in Buffalo's offense. In general offensive vernacular, the "Y" receiver lines up tight to the formation, at or near the line of scrimmage. Whether or not the player has his hand in the dirt or not is irrelevant to the "Y" receiver designation.

Both images below show Nelson as a "Y" receiver; in both cases, he's lined up tight to the formation, near right tackle Erik Pears. 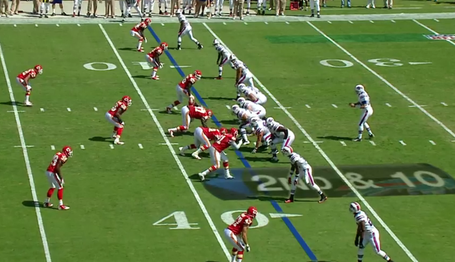 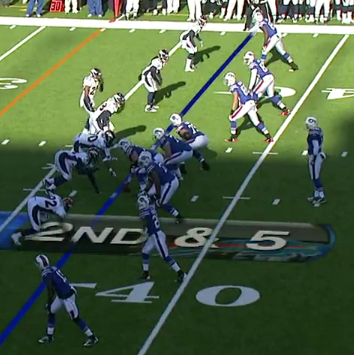 When the Bills spread the field in this fashion, they typically do so with four receivers and a running back on the field. In those cases (and in many other cases), Nelson - the team's most reliable possession receiver - is a functional tight end, even though we all know that's not his actual position. Most color analysts, who may not have a great handle on Buffalo's personnel, may simply be noting where Nelson is aligned and mistaking his position based on what they've seen on tape. 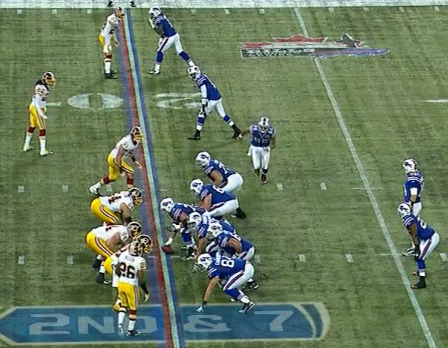 Earlier this off-season, when telling WGR 550 that the Bills are likely to be "receiver by committee" this year, quarterback Ryan Fitzpatrick expressed excitement about one particular personnel grouping in particular: a three-receiver package that features tight end Scott Chandler as the fourth receiving option. The reason? Having Chandler and Nelson on the field at the same time allows the Bills to be more creative with their play-calling, because Nelson and Chandler are so interchangeable in how they are utilized as receivers.

See the above still, for example: this was Chandler's first touchdown against Washington. Nelson lines up in his usual "Y" receiver placement, but Chandler is also on the field with his hand in the dirt, making him a "Y" and Nelson the "R". Nelson would eventually go in motion and end up the functional "Z" receiver on the play, but at the outset of the formation, the defense has to guess as to what Nelson and Chandler may do on the play. 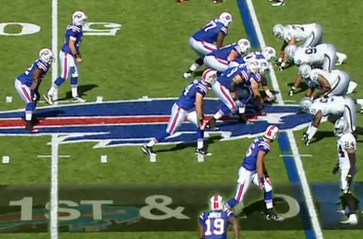 Here, too, is an example of Chandler - lined up as Nelson typically does in four-receiver sets - on the field with Nelson, who is in the slot (but on the line, if you'll notice, as Donald Jones goes in motion behind him). 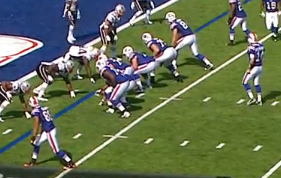 One last example: Here we have Nelson in the slot as the "R" receiver, with Chandler standing up as the "Y". This was the formation on Chandler's touchdown grab against New England. The interchangeability of Chandler and Nelson in formations - not to mention their very similar length, which makes both dangerous middle-of-the-field targets, particularly in the red zone - makes the duo difficult to prepare for, and allows Gailey to be a bit more creative with his formations and the personnel groupings around them.

But back to the original point: Nelson being mistaken for a tight end. Again, it has less to do with people looking at the Bills' roster and seeing Nelson listed as a "receiver," and more to do with how Nelson is used in the offense, particularly as the field is spread. It's the same positional questioning that plagues a guy like, for example, Aaron Hernandez: is he a tight end? A receiver? An H-Back?

In the end, the position that Nelson purportedly plays doesn't matter. What matters is that he's a good, consistent and reliable player that gives the Bills some versatility with their play-calling.