Buffalo Bills Re-Watch: On Donald Jones And The Deep Ball

Share All sharing options for: Buffalo Bills Re-Watch: On Donald Jones And The Deep Ball

For a second straight off-season, Buffalo Bills wide receiver Donald Jones has emerged as a likely starter and a "break-out candidate" for the team that signed him as an undrafted free agent out of Youngstown State in 2010. For most Bills fans that have closely followed Jones' career, one question is being asked of this recurring development: "why?"

Appearing in eight games in 2011 (though in total, he was healthy for only just over six games' worth of field time), Jones caught just 23 passes for 231 yards and a touchdown. Despite his underwhelming production, Jones remains the favorite to start at receiver once again, and the team seems ready to play him more in the slot to try to up his production.

Naturally, I wanted to take a closer look at Jones while re-watching last year's games. I went over each and every pass thrown his way last year; let's confirm some existing suspicions and maybe even dispel a myth or two.

First, let's briefly cover Jones' time in the slot last season: he wasn't targeted an awful lot lined up inside. Of his 46 targets (which averages out to just under eight per game, for those counting), 10 came from in the slot. Jones caught four passes for 13 yards out of the slot in 2011.

Yet as the season progressed, you could see why the Bills wanted to get Jones involved more in the slot - he was the team's vertical threat, and as teams tried more zone coverages and tighter crowds in short throwing lanes in the middle portions of the season, Chan Gailey appeared to be trying to combat that by putting Jones in the slot and letting him get vertical from there. Unfortunately, freer releases and more space didn't yield any results for Jones and the Bills as they tried to establish a deep passing game.

In reviewing these throws, I counted 17 intermediate-to-deep passes that Ryan Fitzpatrick put up for Jones - an average of roughly three per game. Of those passes, only two were completed, yielding 77 yards - with both plays coming in the Week 3 win over the New England Patriots. Clearly, the Bills struggled to get Jones the ball vertically last season.

However, the tendency for fans has been to write Jones off as a deep threat. I've gone on record against that idea, and as we break down each of those 17 deeper throws below, you may begin to understand why I remain (relatively) high on Jones. Here are those 17 throws, presented chronologically. 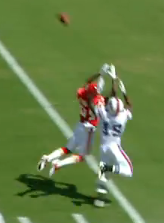 On a third down, Fitzpatrick challenges Kansas City's defense vertically, trying to fit the ball between the corner and safety to Jones. Brandon Flowers has impeccable coverage, Fitzpatrick doesn't throw the ball far enough up the field, and Jones does well to prevent Flowers from intercepting the pass. 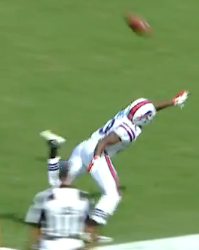 Also in Week 1, Jones gets separation vertically, but a late bump from Flowers at the end of the route gets him off balance enough that he can't track down Fitzpatrick's much better throw. Without that little nudge, Jones doesn't break stride, and it's likely a touchdown. Bad luck here.

Most fans will remember this play, as it came two plays before David Nelson's game-winning touchdown catch against Oakland. Fitzpatrick threw an awful football toward Jones in single coverage, and Jones went up and spiked an interception out of Chris Johnson's hands as if it were a volleyball. This was, quite literally, a game-saving play from Jones. 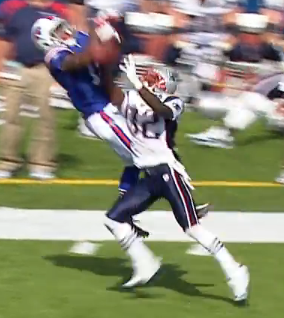 In Week 3, Jones cleanly beats Devin McCourty deep, but Fitzpatrick's pass is underthrown. Jones is forced to adjust and still has a shot at the ball, but the poor throw allows McCourty to get back into the play and get a hand into the action to break the pass up. It's not terribly unreasonable to expect Jones to come down with a throw like this, but the throw was the bigger problem here.

Cognizant of Jones getting open deep earlier, the Pats play softer, and Jones breaks off a deep route in the intermediate range. There's no defender within ten yards of him. Fitzpatrick throws the ball two yards wide, and Jones is left to feebly lunge at an uncatchable ball out of bounds.

Here, we see the first instance of a tendency that you'll see a lot from this point forward: Jones is open, but attacks the ball (read: jumps) too early. This is another poorly placed throw from Fitzpatrick, but it's at least in the strike zone; a better-timed jump would at least give Jones a fighting chance at a leaping, acrobatic grab here.

Success! Jones torches the cornerback, and Fitzpatrick lofts the ball out far enough to let Jones run under it. It's not the prettiest deep connection you'll ever see, but it was pretty easy nonetheless, and it yielded 48 yards.

This play sparked the Bills' game-winning drive against New England, and was easily the best Fitzpatrick-to-Jones throw we've seen to this point in the last two years. Jones doesn't get a ton of separation on McCourty, but there's room, and Fitzpatrick throws a strike. This play gained 29 yards, and was the last deep connection of the year between Fitzpatrick and Jones.

The following week, on a play-action fake, Fitzpatrick tries to squeeze the ball between two defenders to Jones, who was sprinting toward the bottom left-hand corner of this still when the ball was delivered. This throw had almost no chance of being completed to the guys in the right colors, and that's on the quarterback.

Jones gets a step on Nate Clements running deep, but Fitzpatrick throws a duck, and Jones is left trying to come back to the ball and scoop it off the turf. He had a shot at this one, but couldn't bring it in while wearing Clements like a cape. 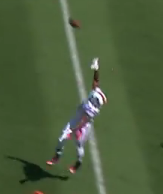 Again, we see Jones jumping a bit early and rounding off his route a hair before Fitzpatrick expected him to. The throw is a bit high, but a crisper break and a better-timed jump likely yields a completion here, as Jones was wide open.

Here's another early jump. This play came out of the slot, with Jones gaining the inside shoulder on the defensive back. A low throw is an easy completion here, but Fitzpatrick's throw is high, Jones jumps too early, and we see another incompletion. If at this point you haven't noticed how often Jones is facing the line of scrimmage on these deep throws, scroll up a bit and take a gander, then continue to notice it as we move forward. 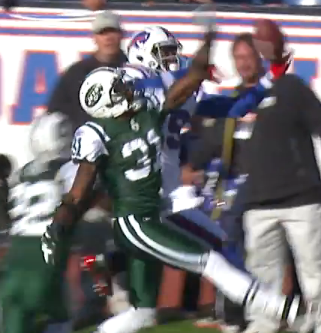 This Fitzpatrick throw was designed as a back-shoulder throw, but Antonio Cromartie had very good coverage. It's not the most accurate pass, but it's definitely a catchable ball. Jones uses his right hand to shield Cromartie's outstretched mitt from the throw; as a result, Jones himself only gets one hand on the ball and can't reel the pass in. On a long list of frustrating throws, this one was particularly galling to watch a dozen times. 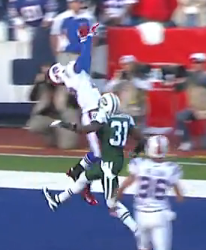 This is another high throw from Fitzpatrick, and another instance of Jones jumping a hair too soon. Unlike previous throws, however, Jones has a very legitimate chance to bring this one in; the ball scoots right between his hands. It's not a drop, but it's a pass that Jones could very well have caught. 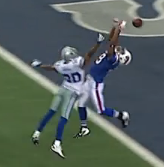 This was actually a pretty good Fitzpatrick throw, as he had to keep the ball up to get it over the defender. It's ultimately another example of Jones struggling to track the ball down while in the air. 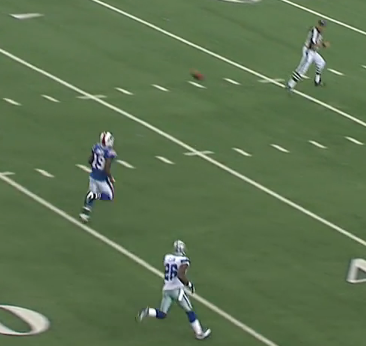 Well, we don't need a lot of descriptive words here, do we? Jones is all alone in the middle of the field against a busted coverage, and Fitzpatrick overthrows him by a solid eight yards.

The two major themes here are obvious: there were a lot of inaccurate throws, and there were a lot of mistimed routes and unnatural ball-in-the-air ability. This speaks to two things: Jones is not a natural deep threat, and the quarterback and receiver were not on the same page much last season. A lot of Fitzpatrick's inaccuracy seemed to stem from Jones not being precisely where Fitzpatrick expected him to be, and a lot of Jones' struggles in the air seemed to stem from the ball not being precisely where he needed it to be.

Here's what I believe after conducting this study: