On Friday afternoon, I collected my 16-month-old daughter and headed to Buffalo Bills training camp for the first time this year. I watched a fair amount of practice, but I also spent a good deal of time following her around, playing in the mist tent and keeping her out of trouble, so the notes I have from practice aren't what I would call "complete." Still, I noticed some worthwhile talking points in the limited time I had my eyes on the field.

After the jump I'll get into some of the specifics, but here are the generalities. The whole first-team offense had a case of the drops on Friday. They spent almost the entire team portion of practice in red zone work. The defense looked good, but the offense won a few battles here and there. I like the new field at St. John Fisher, but it makes it much more difficult for fans. It was really hot.

- T.J. Graham didn't have his best day. Ryan Fitzpatrick hit him in the hands in the end zone, and he dropped his second pass in as many targets in the first parts of 7-on-7. C.J. Spiller turned and ran before he had possession of the ball for another drop, and Fred Jackson got in on the dropsies later.

- Donald Jones made some tough catches today. He had one in the end zone during red zone work that he was knocked to the ground on, but maintained control. Each time today I was wondering what receiver made the tough catch, it was Jones that got up with the ball.

- Arthur Moats was getting a lot of reps with the first-team defense in place of Kirk Morrison.

- Vince Young looked good today aside from his one end zone interception. On that throw, he didn't see the safety sneaking under the route. He dropped a great end zone fade in to Dorin Dickerson right after that, and when he tucks and runs he still has it. I wish I could have watched him a little more to see what he brings to the table and if he's starting to understand Chan Gailey's offense. I saw virtually none of Tyler Thigpen, so I can't compare.

- I was glad to see Eric Wood running, literally, with the first team during two-minute drill work. He isn't taking every rep, but he probably could if pressed. It was also heartening to see Kelvin Sheppard in there for every play with the starters, and even some with the twos.

- David Nelson went and grabbed four cups of water for the first-team receivers during their last rep in the first full-team portion of practice. This guy is almost too nice. I only noticed since I was behind the action - and I know I've been partial to him since he was signed - but the guy is a legit nice guy, right?

- Chan Gailey was without a vest today. Even he was hot.

- Spiller was in motion a couple times today with Jackson in the backfield. I hope they use this formation out of the huddle a lot this year. They need to take advantage of their weapons, even if it's as a diversion.

- Stevie Johnson was so limited today with an apparent groin injury that I only saw him run a single route. His tweak was on the other side of his body from his surgically repaired groin injury.

- Kellen Heard was noticeably limping while walking near the end of practice. It doesn't look like he's going to be able to mount a serious push to overtake Alex Carrington or Torell Troup at defensive tackle, unless his recovery from injury is unexpectedly speedy.

- Before I talk about what some other folks saw on Friday, I wanted to talk about the new field. I got over there during individual team work, and the view is pretty good. The walkway is narrow between the old field and the new field. (I was pushing a stroller and there was just enough room for one person to pass me going the opposite direction.) I also think it's a pretty long walk from the entrance, around the entire track, and into the viewing area for the new grass field. The reason for the cutoff is the separation of players and fans, as well as the need for the hospitality tent for families and VIPs. It's not an unreasonable distance, it's just a much longer walk.

As I said, I didn't see everything at camp yesterday. But several reporters made the observation that Chris Hairston took reps at right tackle today. Erik Pears has been out for a while, and the Bills may now be seeing it as a long-term injury. Joe Buscaglia tweeted that Gailey is monitoring the situation, telling reporters, "I'm not ready to put the word major on it, but it's a concern."

I will make more of an effort to tweet and observe when I travel to camp on August 11 without my offspring. 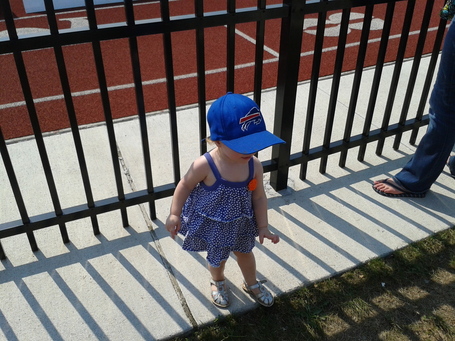