One does not need more than two eyes and acceptable short-term memory to know that the Buffalo Bills were awful on defense in their 48-28 Week 1 loss to the New York Jets. In particular, Buffalo was horrendous trying to defend the pass, allowing receivers to run free all afternoon. Rare was the instance when Mark Sanchez couldn't deliver the ball at the precise instant he finished his drop.

After the jump, we'll go into detail on one of the best examples of awful coverage from this game: the second-quarter touchdown pass from Sanchez to Stephen Hill that put the Jets up 14-0 just over 15 minutes into the contest. Let's hit the tape, shall we?

As you can see in the first still below, the Jets are in a basic personnel package (two backs, a tight end and two receivers) in an I-formation. Buffalo countered with its base 4-3 defense. Yawn. We'll see this hundreds more times this year, and guys have been playing these alignments their whole life. 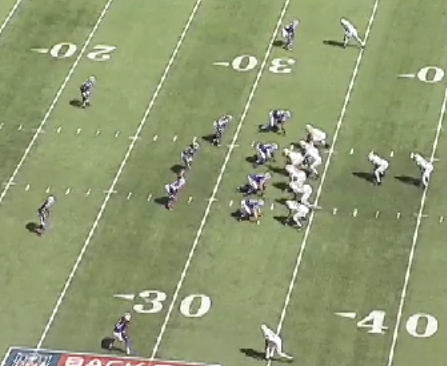 At the snap, the Jets leave both backs in to chip; they'll eventually release into short outlet patterns, but Nick Barnett and Kelvin Sheppard are there to cover those up. Right now, the Jets are blocking Buffalo's defensive line 7-on-4, effectively, leaving Buffalo in a 7-on-3 (soon to be 7-on-5) situation in coverage. 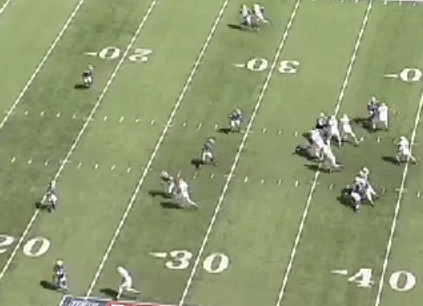 Below, we'll see the initial action of the breakdown: Sanchez's pump fake. The Jets went to the pump fake early and often to keep Buffalo's young corners off balance, and it worked to perfection. The bigger issue here, however, is with the team's two safeties, George Wilson and Jairus Byrd. 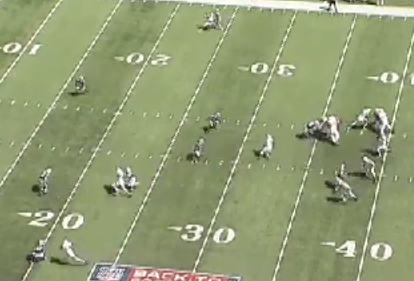 As Sanchez delivers the ball below, you can see that both Wilson and Byrd have converged toward the middle of the field on tight end Dustin Keller, who has gained a little separation on the trail coverage from linebacker Bryan Scott. At the moment that this still was taken, Wilson has caught sight of Byrd and is wheeling back to his left to try to get back over to the right side of the field, where Hill has cleanly beaten Stephon Gilmore on the pump action. 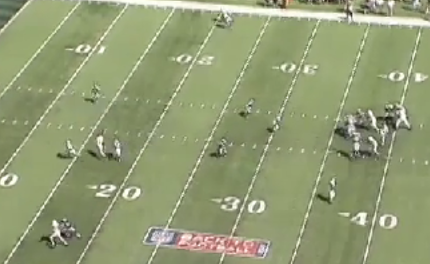 This is the point at which the ball arrived to Hill (on a pretty poor throw from Sanchez, no less - Hill had to stop his route and jump into the air to make sure Gilmore didn't get back into the play, so under-thrown was that ball). You can see that Wilson has not even remotely come close to getting back into the play.

I don't know a lot, but I'm fairly certain that the Bills did not intend to triple-team Keller in the middle of the field - and my guess is that some sort of communication error between the two safeties led to Buffalo's two young corners in single coverage on a pump fake up the sidelines. It's also possible that Wilson simply bit on the pump fake, as well, and couldn't recover on time to get back on his assignment. 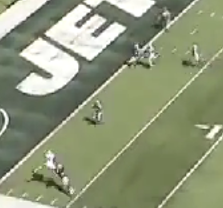 Below, you'll get three consecutive stills of Gilmore covering Hill during the pump fake. Hill's hitch and the pump action was all that was needed for the Jets to make up about six yards of real estate in a matter of a second.

Gilmore was poor in coverage, and there may have been some sort of communication or assignment breakdown between Wilson and Byrd - unless Wilson just bit too hard on the pump fake, too. Either way, that's two major gaffes on one play, and it explains why the Jets were able to score their easiest offensive touchdown of the day despite a poor throw from Sanchez. This play is a prime example of everything that the Bills need to fix quickly in order to field a competent defense: pretty much everything.