One Buffalo Bills fan fondly recalls the time that he unintentionally dissed a skinny second-year punter at training camp - and how glad he is that said punter, Brian Moorman, got the last laugh.

In the summer of 2002, the Buffalo Bills were conducting their third training camp at St. John Fisher College. As was customary for us, my father and I decided to take a trip up to the campus to catch a camp practice. This was a particularly great year to do so, as the team had just traded for Drew Bledsoe, and the region was going crazy with anticipation for the new season.

Being 16 at a training camp practice is sort of awkward (like just about everything is at that age): I remember noting that I wasn't young enough where soliciting an autograph would automatically yield a signing, and vaguely wondered if it was even "cool" to camp out in a group of smaller children and troll for signatures, anyway. But the burning desire to be close enough to see beads of sweat on a player's face while he signs for you still hadn't faded.

So there I was, standing at a chain-link fence after practice ended, watching kicker Mike Hollis approaching fans to sign. (Little kids weren't going to hang around for the kicker - they were all flocking toward Bledsoe and the various other "star" players - so I was essentially by myself; awkward feelings avoided.) Hollis was a pretty well-known kicker; he'd had a great career in Jacksonville, and the Bills had brought him in as a free agent the previous spring. I knew who he was, at any rate.

Sure enough, Hollis walked directly up to me - that's a pretty cool feeling, watching an NFL player beeline for you, even if it's just a 5'7" kicker - and kindly asked me to hand over the camp guide I was carrying so that he could sign it. The Bills were selling magazine-like camp guides with bios for each player on the team, and there was a box in each profile for player autographs. I handed the book over, Hollis flipped to his page, and signed. I was pleased, but also bummed in a way, because I had a small toy football that I'd have rather had him sign. But whatever; a signature's a signature.

While Hollis is signing, much to my surprise, some skinny dude abruptly grabbed that football out of my hand and scribbled his name on it. It was an utterly bewildering moment. I had no idea who the guy was; he was clearly a Bills player, as he was wearing a practice jersey, but I'd have sooner been able to recite theories of particle physics than guess who this dude might be.

Brian Moorman saw the bemused look on my face when he handed the football back, freshly signed. He laughed, gave me a high five, then offered to sign his profile in my camp guide next to Hollis' fresh signature. Still rattled by the events of the last twelve seconds, I gave Moorman permission to sign my book. Only after he and Hollis had moved on to the other four people not so eagerly awaiting their signatures did I realize that I'd probably just unintentionally dissed the Bills' second-year punter.

What I'd actually done was probably unintentionally dissed the best punter in franchise history - an eventual two-time Pro Bowler, a two-time All-Pro selection, one of the most popular players in the recent history of the team, and a future member of the team's Wall of Fame.

If you've been a Bills fan within the past decade, you don't need to be reminded how awesome this guy was: on top of being one of the best punters in the league for a long stretch of seasons, he was also the master of the trick play. Moorman finished his Bills career on Tuesday when he was released, and did so with 55 career rushing yards, 68 passing yards and two career touchdowns.

Some fans will remember Moorman's 12 years in Buffalo for his booming, accurate punts or those hilariously effective fakes. Others will remember him getting crushed by the late Sean Taylor on a rare, ineffective fake punt during the Pro Bowl. More will remember Moorman for his leadership - not just on the field as an annual special teams captain, but off of it, where his PUNT Foundation has been a huge lift for the community. That's an aspect of a player's impact that is (unfortunately) rarely discussed on a site like this.

I'll remember him as a bright spot in a very difficult stretch of years being a Bills fan. I'll remember him for the rest, too, but mostly, I'll always regard Moorman as one of my favorite players to don a Bills uniform. In a decade of futility, he was a player fans could be proud of, who actually entertained the masses (even if it was ironic entertainment in many cases), and who did so while being the epitome of a pro on and off the field. I am confident that he'll be equally revered by the vast majority of this admirable fan base, as well.

Another thing I'll always do: keep that signed football displayed prominently on my bookshelf. Thanks for taking the initiative on that one, Mr. Moorman. 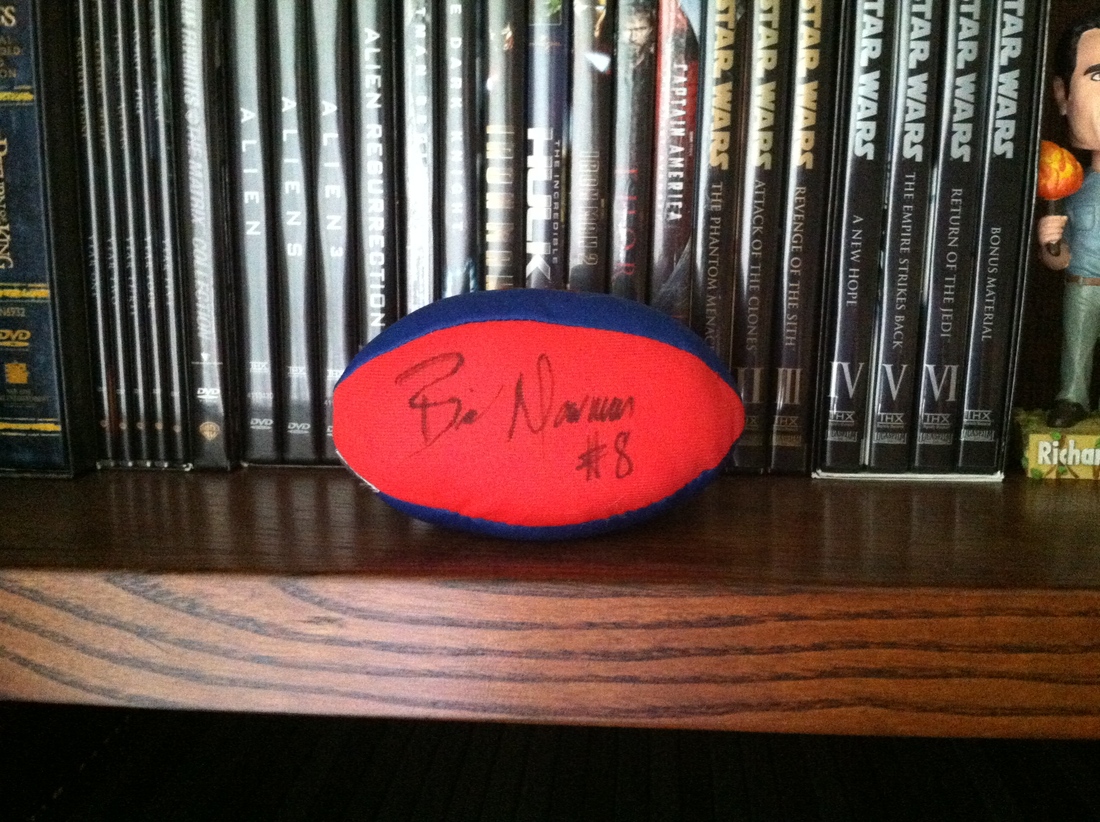