Bill Belichick became head coach of the New England Patriots in the 2000 season. His Patriots have played the Buffalo Bills 24 times, and they're 21-3 in those contests. So yeah, it's pretty easy to blindly walk into tomorrow's 25th meeting between the Bills and Belichick's Patriots and assume that New England will emerge the victors.

The Bills, however, did things against New England last year that they hadn't done in a long time. First, they beat them - for the first time in 16 tries - 34-31 in Orchard Park, aided by four Tom Brady interceptions. Then they spanked the pants off of them in the first quarter in Week 17, opening up a 21-0 lead before ultimately giving up 49 straight points in a huge loss. These were, somewhat sadly, major steps for a Bills franchise that has been completely dominated by New England for over a decade.

Things may be changing, however. The Patriots have struggled out of the gate and come into Buffalo with a 1-2 record. The 2-1 Bills spent an off-season shoring up its defense specifically to be more competitive against the Patriots. It's a new season for both teams, and the latest Bills/Pats matchup kicks off at 1PM tomorrow at Ralph Wilson Stadium.

The Importance of Divisional Play

Even the staunchest fan advocates of head coach Chan Gailey have to admit that his team's awful play in AFC East games is the biggest black mark on his CV now more than two years into his run on the job. The Bills are 2-11 in division games under Gailey, and those matchups have been some of the team's biggest blowouts of his career.

Their two division wins: a 17-14 Week 15 win over Miami in 2010 (a game in which kicker Dan Carpenter missed a whopping four field goals), and last year's 34-31 win over New England (which, again, required four Brady picks to get done). In their 11 divisional losses, they've been defeated by an average margin of 16.5 points. In that same time frame, New England is 10-2 in division games.

If Buffalo loses this game, they'll be 0-2 in the AFC East, be down a game each to the Patriots and New York Jets, and both of those teams will exit the first quarter of the season with perfect division records. That would be a huge early hole to dig out of - particularly for a Bills team that doesn't have a history of performing well in the division to begin with. 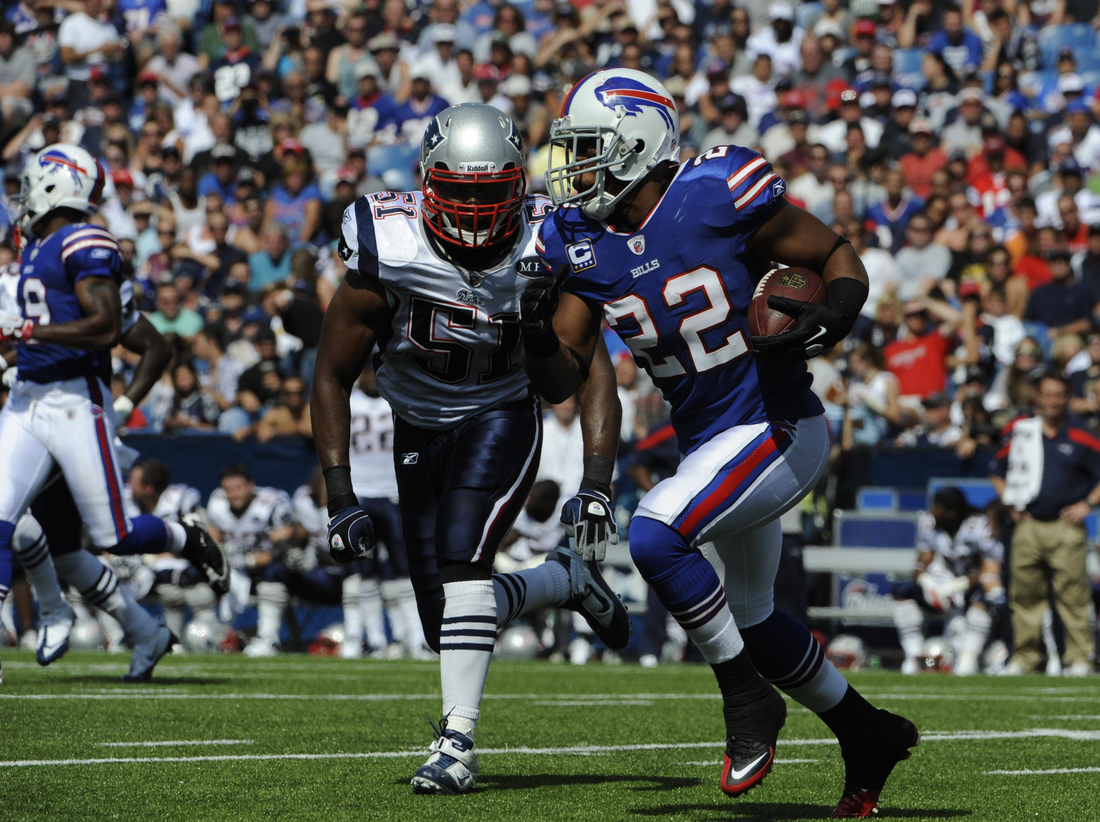 For Buffalo, a lot is riding on Fred Jackson and C.J. Spiller, the team's two star running backs. The availability of both (each is listed as questionable) - not to mention how much they can actually do if they suit up - will go a long way toward not just how explosive the offense may be, but how difficult they are to play against.

Gailey's offense is predicated on balance - not just your typical run/pass balance, but in keeping opponents off balance. Their misdirection running scheme is difficult to prepare for, but will be simpler to defend if it's Tashard Choice carrying the rock. The offensive line is playing extremely well, but their jobs get much more difficult if the team becomes one-dimensional. Having the two running backs helps Buffalo's offense maintain its balance, even if they're not logging a lot of touches; they're threats just by being on the field. (That's especially true regarding Spiller.)

Defensively, the Patriots start two rookies - defensive end Chandler Jones and linebacker Dont'a Hightower, their first-round picks this past April - and are now predominantly a 4-3 team. That will allow them to better match up against the Bills' spread looks than they have in years past. New England has been largely excellent defending the run this season, surrendering just 81 yards per game, but they are still susceptible to giving up chunks of yardage in the passing game. If the Bills can maintain their balance offensively, they may be able to put up some big passing plays.

The talk of the Patriots' offense this season has been centered around its offensive line. Brady has been sacked seven times in three games, and the pressure opponents have generated has helped to keep the Patriots' passing attack out of rhythm at times. The unit's best player, Logan Mankins, did not practice all week and may have a tough time suiting up on Sunday (he's listed as questionable). Right tackle Sebastian Vollmer is dealing with back issues, and the group is struggling to replace veterans Matt Light and Brian Waters, whom they lost this off-season.

From a skill position standpoint, however, the Pats are still loaded. Brady remains among the best quarterbacks in the business. The same is true for tight end Rob Gronkowski and wideout Wes Welker. The team has gotten good production out of a revamped running back corps featuring Stevan Ridley and Danny Woodhead, and imported receiver Brandon Lloyd appears to be getting comfortable in the offense quickly, as well.

For the Bills, the goal is simple and well-established: disrupt Brady, disrupt the offense. Their entire focus this off-season was on improving their defensive line to better bother opposing quarterbacks, much like the New York Giants have done twice to Brady in Super Bowls. They'll do what those Giants did - rush the passer and disrupt timing routes - while taking the inevitable, proverbial punches in the chin. Buffalo won't flat-out stop Brady and the Pats, but if they're on their game, they'll be very competitive and make some plays.

What the Film Says

The aforementioned Gronkowski is arguably the best tight end in the NFL - but because of the Patriots' issues protecting Brady, they've been forced to change the way they use Gronkowski so that he can help in their protection schemes.

Above, you can see how far Gronkowski was typically allowed away from the line of scrimmage (that's him on the left of the screen grab); aside from one play where he was aligned in the slot, that's as far as he got. He was either aligned tight to the formation in that manner, or had his hand in the dirt like a tight end traditionally lines up, on 48 of the Patriots' 49 called pass plays (98%). By contrast, in last year's first game against Buffalo, Gronkowski lined up in the above fashion on 27 of 47 passes (57.4%).

Gronkowski was allowed to run a pass route on 32 plays against Baltimore (65.3% of called passes). That's a 20 percent drop from last year's first Bills game, when Gronkowski ran routes on 40 of 47 passes. What are you left with? Gronkowski was asked to block on 34.7% of New England's passes last week; a year ago in Buffalo, he blocked on just 14.9% of throws.

Don't make the mistake, however, of thinking that Gronkowski doesn't affect the way teams cover New England, even as he's less involved as a receiver. Even though he was targeted on just three passes last week (that's a target on 9.4% of routes run, compared to a 25% figure against Buffalo), Baltimore was still rolling two or even three defenders his way at times, allowing some of the Patriots' other weapons to have big nights. The important takeaway here, however, is that a strong Bills pass rush could mean Gronkowski spending significantly less time running routes - and that would be a win for Buffalo.

New England's staunch run defense is spearheaded by Wilfork, who is annually one of the toughest blocks in the NFL. He's trimmer and more explosive than in years past, and he's been excellent at the point of attack through three games this season. Buffalo needs to control the line of scrimmage to maintain their balance offensively, and that begins with Wood handling himself against Wilfork. Wood won't have to go it alone, of course, but this is still a matchup that the Bills have to win.

Buffalo has only given up one sack this season, and the Patriots have struggled to generate a consistent pass rush thus far. Their one edge threat has been the rookie Jones, who has two sacks and two forced fumbles in three games. He'll be matched up against the Bills' hot rookie left tackle in Glenn, who has drawn national praise for strong performances, particularly against Kansas City. Buffalo's passing attack is so fast-paced that pressure is tough to come by to begin with for opponents, but there's evidence to suggest that if Glenn can handle Jones, the Bills will have ample time to throw the football. 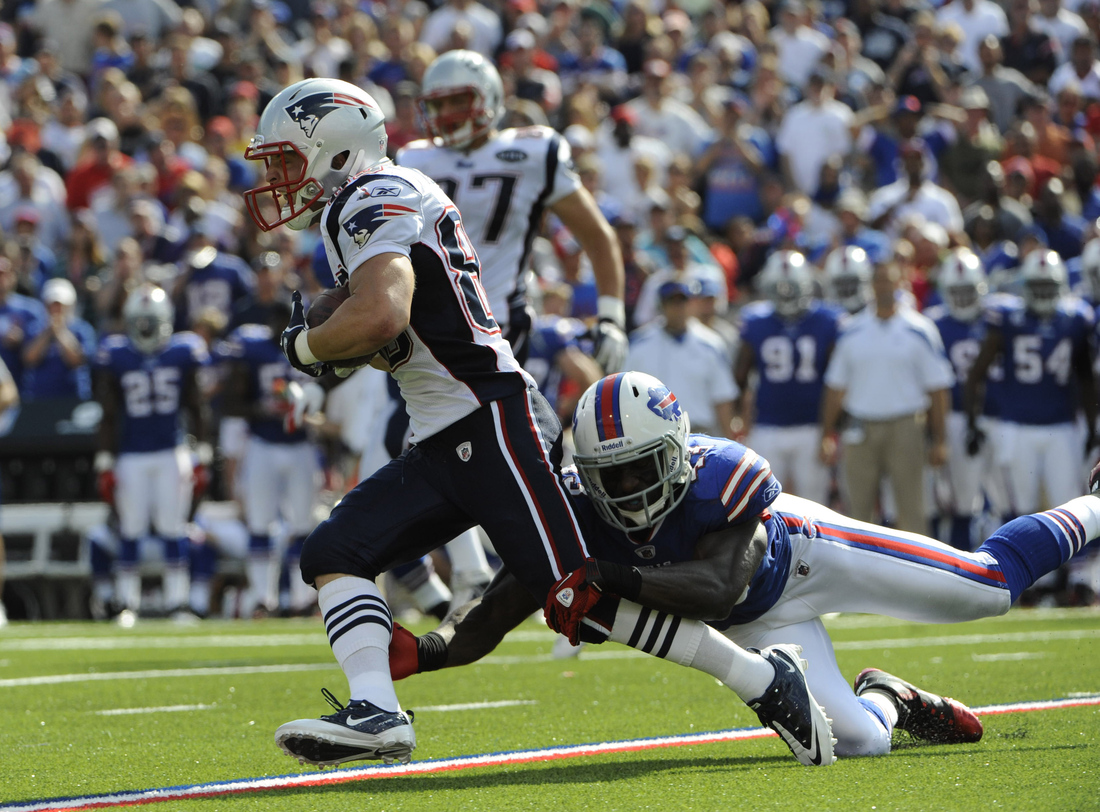 Welker is a notorious Bills killer. In last year's double-header alone, Welker had 22 catches for 268 yards and two touchdowns. After a slow start this season, Welker finally hit his stride last week against Baltimore, raking in eight catches for 142 yards. His increased involvement should be aided by the potential loss of injured slot receiver Julian Edelman, who did not practice at all this week and has been ruled out. Rogers, the team's go-to slot corner, saw more playing time than every other Bills corner aside from Stephon Gilmore last week; that's enough evidence to suggest that Rogers will be lined up on Welker a lot. This is a huge matchup for both sides.

This is the big one - the matchup that, more than any other single personnel matchup, will decide the outcome of this football game. The Patriots' offensive line is dinged up and not performing very well. Buffalo's defensive line has recorded seven sacks in the last two games after a slow start in Week 1. This is why the Bills paid premium dollar for elite-level defensive line talent: to win this matchup, and to make Brady's job more difficult. The fact that the Pats are a bit patchwork at the moment makes it even more important that the Bills come out ahead in this area. If they don't, it's going to be a long afternoon.

Now that we've covered all of that, let's re-emphasize a point that we made earlier in the week: Buffalo has a hard enough time competing with New England without shooting themselves in the foot. The Bills haven't yet played a turnover-free (or even single-turnover) game against New England under Gailey; instead, they've given the Patriots a whopping 15 free possessions. Buffalo has to clean up their own game (that includes penalties; they've taken 21 in three games) in order to prevent all of these fancy notes, reports and matchups from becoming completely irrelevant in a lopsided game.

Beyond that? The stakes are high. The personnel is more even than it's been in years (especially if Buffalo's runners suit up). Both teams are craving a win for very different reasons. Every week in the NFL is a litmus test, and after two wins in two games they should have won, it's time to see if the Bills can compete with and beat a team that most believe they won't defeat. We'll have a much better idea of where the team stands tomorrow evening.