Welcome to New York Jets week, Buffalo Bills fans. Six days from now, our favorite team will be taking on Rex Ryan's crew in a Week 1 matchup that should serve as a good litmus test for where the Bills are within the AFC East.

This is not a matchup that has favored the Bills of late. Buffalo is 0-4 against the Jets with Chan Gailey as head coach, and they've lost those four games by an average score of 33-14. The matchup has also been a particularly brutal one for quarterback Ryan Fitzpatrick; in five appearances with Buffalo against Ryan's Jets, Fitzpatrick's 7-to-4 touchdown-to-interception ratio is easily overshadowed by a 49.7 percent completion rate and a meager 5.5-yard average per pass attempt.

Why has Fitzpatrick struggled so mightily against the Jets? One reason: Fitzpatrick is at his best when he knows what's coming. His game is built around making the right pre-snap read and putting the ball in the right spot quickly. That style, combined with his struggles to create throws when his initial reads break down, has not played well against the Jets and Ryan, who is a master at disguising his defense's intentions.

Let's take a look at just one example of a Ryan play call that threw Fitzpatrick for a loop. This play came late in the second quarter of the Jets' 27-11 win over the Bills at Orchard Park last November. 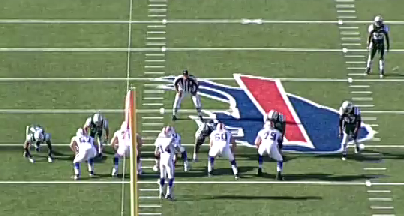 On the play, Buffalo has five players split out wide and an empty backfield. Ryan counters with five players at or near the line of scrimmage, including outside linebackers Aaron Maybin and Calvin Pace lined up wide from the left and right tackles, respectively. Two of the interior rushers are linebackers; the player directly in front of Erik Pears is David Harris. 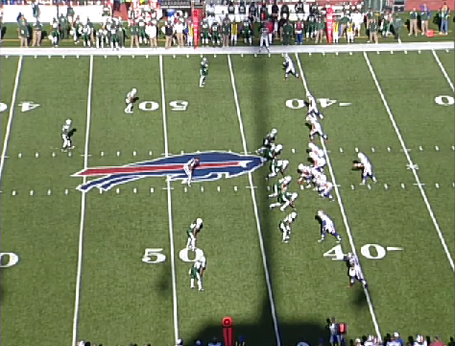 Here's the formation from another angle. You can see that the Bills have two receivers to the left, and the Jets have three defensive backs in the vicinity. Pre-snap, that's not looking like a good spot for Fitzpatrick to deliver the ball. On the right side of the formation, the Bills have three receivers across from two defensive backs and a single-high safety. Fitzpatrick can be reasonably sure that Harris will drop into a short zone on the play, but he'll have to cover some ground to do so. Fitzpatrick is liking what he sees to the right.

At the snap, both Harris and Pace bolt to their left. Ryan has dialed up an overload rush, sending the slot cornerback off of left tackle (which you can see in the shot below). By sending two players off the right side of the line into coverage, not only has Ryan overloaded the left side of Buffalo's line - where Andy Levitre was making the start at left tackle, mind you - but he's flipped the matchups in the secondary. 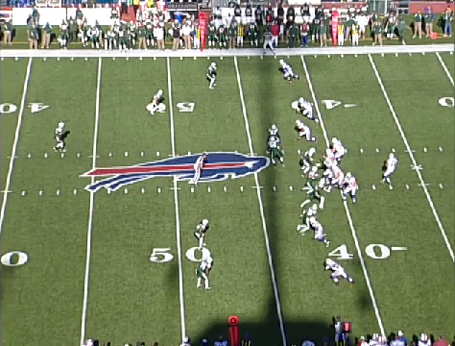 Again, here's the other angle. With the slot corner rushing, the Bills have two one-on-one matchups on the left side of the formation. The Jets' corners are playing off in coverage, so Buffalo's receivers should be able to get open with ease, even if it's only for a minimum gain. Meanwhile, the three receivers on the right side of the formation - where Fitzpatrick wanted to go pre-snap - are now working against Harris and Pace, two corners and the single-high safety. That's 2-on-2 on the left side and 5-on-3 in favor of the Jets on the right, in case you're keeping score - and the Jets' three-man pass rush is overloaded to the left. It's an entirely different look from what Fitzpatrick saw before the snap.

Buffalo's line does an excellent job of shifting and picking up the overload, giving Fitzpatrick ample time to deliver the ball. Almost immediately, however, Fitzpatrick begins drifting to his right, and he's settled in on David Nelson, the Y receiver on this play, in his matchup against Harris. Nelson will be breaking to his right, and should beat Harris with ease... 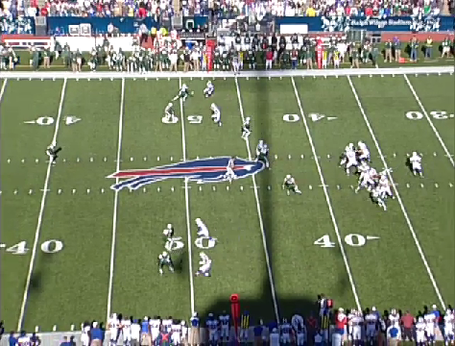 ... except the problem is that Fitzpatrick has forgotten about Pace. Or, even if he hasn't, he's not completely aware of his placement on the field of play at that particular moment. While two Bills receivers work in one-on-one coverage on the left, Fitzpatrick is fixing to force the ball into a passing lane that would be wide open if Pace weren't standing directly in it. 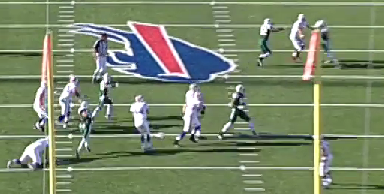 ... and it lands directly in Pace's gut for an interception. This was an awful read by Fitzpatrick, but it was made possible by Ryan's creativity in flipping the matchup advantages Buffalo had pre-snap to the other side of the field. Buffalo's quarterback couldn't adjust.

There is a silver lining here: after four awful games against the Jets, something appeared to finally click for Fitzpatrick in the final meeting between these two teams last year. That was a one-score road loss for Buffalo, and by far Fitzpatrick's best performance against Ryan and the Jets; it was, in fact, the first time that Fitzpatrick completed more than half of his throws against Ryan's defense. (He was 26-of-39 for 264 yards with three touchdowns, no picks and a quarterback rating of 111.5 in that game.) How the Bills finally cracked the code will be the subject of tomorrow's Bills/Jets re-watch post.

If you enjoyed this article and are thirsting for more Bills/Jets re-watch analysis, be sure to check out our brief breakdown of Stevie Johnson versus Darrelle Revis from earlier this summer.