In case you missed it during whatever Labor Day plans you used as a poor excuse to stay away from your favorite Buffalo Bills blog for a day, yesterday we began a re-watch series focused on last year's meetings between the Bills and the New York Jets. The first topic: Rex Ryan's penchant for overloading his pass rush and disguising coverages.

Today, the focus of our re-watch post is to discuss how Chan Gailey, Ryan Fitzpatrick and the Bills adjusted to Ryan's defensive tendencies in the teams' second meeting last year - a game in which Buffalo's offense was much more productive, and the game was significantly more competitive.

In short, Gailey and the Bills made four simple tweaks to their play-calling to counter what Ryan and the Jets threw at them in Week 9. Let's briefly touch on them one by one. 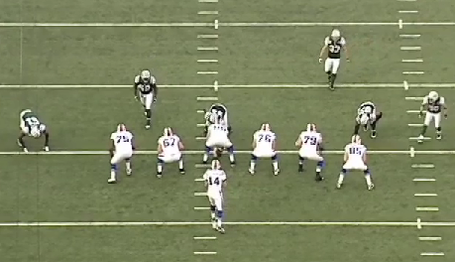 I didn't keep track of the number of times that the Bills ran a play without a back in the backfield in the first meeting, but I'll tell you exactly how many they ran in the second matchup: three. Out of 47 called passes, no less. And even when they did spread the field, they were slightly more conservative in doing so, keeping a sixth blocker in tight to the line every time, as depicted above.

Compare those three empty sets to 11 called pass plays that involved a play fake. That's a bit out of character for a Gailey offense, particularly at the rate it was done; mid-way through the third quarter, the Bills were averaging a play fake for every three called pass plays.

Buffalo's most balanced play fake is one they've used all three years Gailey has been on board, and it involves a pulling guard. We've discussed it on numerous occasions on this blog. 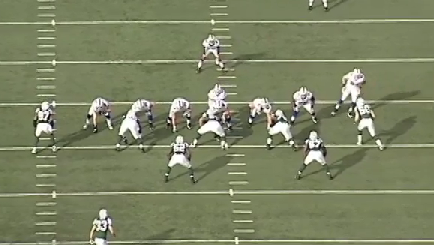 Pre-snap, you can see the personnel package includes two tight ends and a back, meaning that there are only two receivers on the field. The Jets counter with their base 3-4 defense. 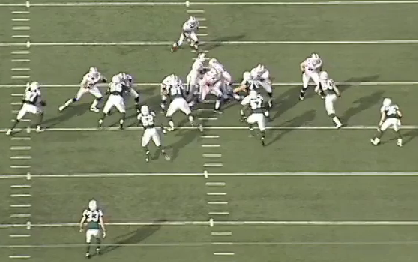 At the snap, all Bills blockers crash left and left guard Andy Levitre pulls across the formation; this is a classic run action, and you can see inside linebackers Bart Scott and David Harris creeping up toward the line of scrimmage. 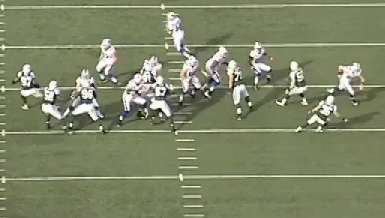 With the play fake executed, C.J. Spiller seals off the left side of the formation, Ryan Fitzpatrick rolls right, and Levitre is effectively the right tackle as the Jets react and retreat back into coverage. This pass was completed to Brad Smith for a 17-yard gain. This is Gailey's favorite play fake, and one the Bills use quite a bit.

No. 3: Timing and Windows

Gailey's offense is famous for letting receivers get to spots at specific times by whatever means necessary; in this matchup, however, the Bills were less reliant on that aspect of the passing game and upped the tempo, looking to get the ball out even faster than usual. They tried to attack one throwing lane in particular, and hit it for a big play twice.

The above still and the below one are going to look awfully similar, aside from the fact that one was to the right side of the formation, and the other to the left. Above, Fitzpatrick fits a pass between a linebacker and a defensive back for a quick 16 yards to Smith. Below, it's the same thing, except to Stevie Johnson. This was something that the Jets exploited against Buffalo's defense early and often in the first matchup, so it was nice to see the Bills counterpunch a bit. 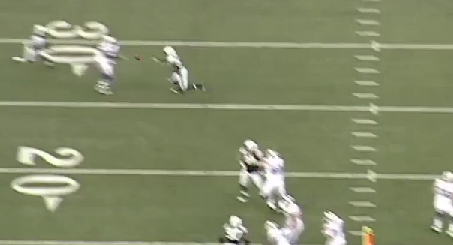 Remember Ryan overloading his rushes from one side of the line? Well, Gailey countered in Week 12 with some overloads of his own. 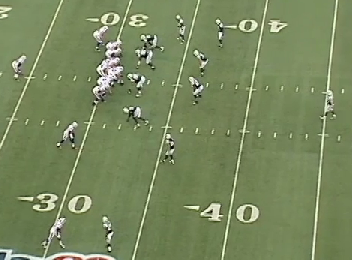 Buffalo was in a formation similar to this quite a bit - sometimes as you see it above, with two receivers, and sometimes with three. In this case, the Bills come out with two tight ends, a back and two receivers, and both receivers are lined up to the right. Ryan's Jets are in a base defense, and there's very little chance that they can work any sort of creative rushes against an alignment like this. It limits Buffalo's spread a bit, but it made life easier for Fitzpatrick after the snap.

These are the little tweaks that make re-watching divisional games especially intriguing; these teams really do know each other quite well, and the wrinkles thrown in are often just enough to force a familiar opponent to adjust. The Bills were successful enough offensivel in this 28-24 loss that you're likely to see more of the same this coming Sunday: personnel packages that dictate the Jets work out of their base defense, and formations and play calls that keep the Jets from teeing off on Fitzpatrick.