One of the more interesting parts of Sunday's Week 1 matchup between the Buffalo Bills and the New York Jets is that while one side of the ball remains largely unchanged (i.e. Chan Gailey versus Rex Ryan), the other side of the ball will see significant changes this year.

Not only has Buffalo switched defensive alignments (they're a 4-3 now) and their coordinator (Dave Wannstedt takes over), but the Jets will look different offensively, incorporating Tim Tebow into an apparently new and improved Wildcat package under first-time play caller Tony Sparano.

Still, we can look at last year's film to take a look at some concepts the Jets used successfully under Brian Schottenheimer and talk about how Sparano can tweak them - and how the Bills should defend them.

Many of Buffalo's opponents tried to utilize misdirection running plays to take advantage of the team's lethargic front seven. Most succeeded. The Jets were particularly effective doing it in the first quarter of their 28-24 Week 12 win in 2011.

Below, you'll see an example of a misdirection play wherein Mark Sanchez faked a handoff to the up back and pitched to Shonn Greene heading the opposite direction. This play was set up by a five-yard end around run just a few plays earlier.

As Sanchez fakes the handoff and gets set to pitch, you can see Buffalo's two weak-side defenders, Spencer Johnson and Nick Barnett, reading to their left - where the fake action is headed.

Johnson has committed, Patrick Turner has sealed off the slot corner, and while Barnett has reacted fairly quickly, he's also got a ton of ground to make up already. Meanwhile, Kelvin Sheppard is rooted to the spot. 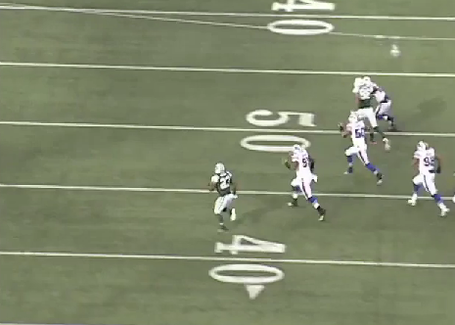 Greene gets outside with ease, and only an outstanding effort from Barnett prevents this play from picking up more than the 16 yards it garnered. 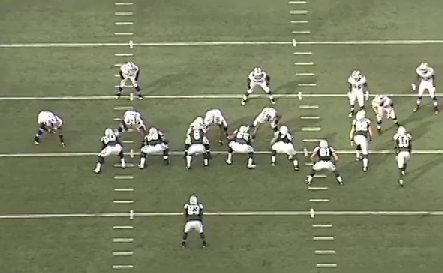 On the last play of the first quarter, the Jets ran an excellent end around - and it's almost an exact replica of a play that the Kansas City Chiefs ran to perfection against Buffalo in 2010; that play featured Jamaal Charles and Tony Moeaki. To the right of the formation, you see Santonio Holmes - the ball carrier - and Dustin Keller, who will act as the sweeping lead blocker. 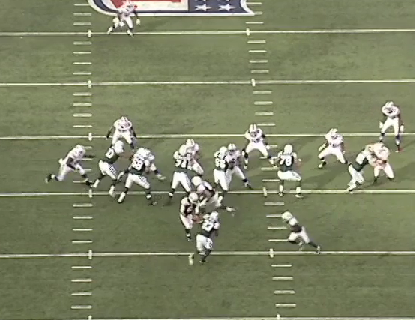 Again, Johnson - playing on the left side of the offensive formation - has committed to the initial run action. The strong side of the alignment is entrenched, and Barnett is the only player with a prayer of stopping this run short. He's got to deal with D'Brickashaw Ferguson first, though. 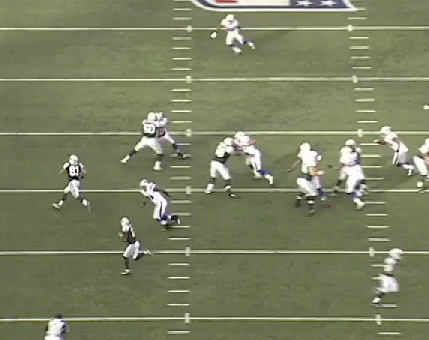 Once again, Johnson is left to vaguely wonder how good he'd be playing outside linebacker if he were 70 pounds lighter. Ferguson has taken Barnett out of the play, and Keller is still out in front of Holmes looking for someone to block. It's sort of mind-boggling that the Bills stopped this play after only 23 yards.

We've known for years that Buffalo struggles to defend the misdirection; the idea, however, is that switching to a defensive scheme that actually fits the personnel, and then seriously upgrading the edge players in said scheme by signing Mario Williams and Mark Anderson, will help them combat some of those woes. The bigger issue for now, in my mind, is the fact that these were all weak-side plays. 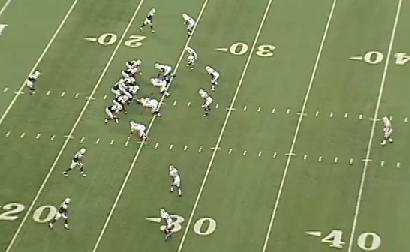 Note that the Jets' formation is pretty balanced: there's one tailback, a tight end next to Ferguson and a slot receiver to the right. Buffalo responds by shifting its linebackers heavily toward the strong side of the alignment, leaving a lot of empty space on the weak side of the formation, but also their two defensive backs in one-on-one situations. 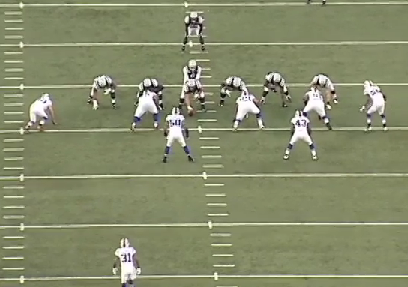 This run is going right all the way, and you can see that Buffalo's shift gives the Jets a pretty straightforward blocking assignment: the right tackle must seal Chris Kelsay, Barnett has to be taken out at the second level, and if Greene hits the hole fast enough, he should be off to the races. 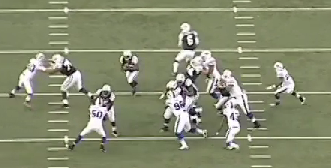 Lo and behold, that's exactly what happened. A running play this basic shouldn't pick up 11 yards with such ease - unless your defense is so porous against the run that they employ radical shifts to the strong side of the alignment, that is.

Buffalo's run defense was very stout in pre-season play, and their scheme and personnel are much more in sync than it was during this particular contest. Until further notice, however, the Jets would be wise to continue to test Buffalo with these types of plays - particularly given the fact that the Bills' new-look defensive line is likely going to be super aggressive, leaving themselves vulnerable to these types of plays, as well as draws and screens. Whoever is calling the plays out of whatever formation (and yes, the Wildcat can definitely exploit weaknesses like this), these are concepts that the Bills have struggled with, particularly against New York.