There are a lot of things to like about the 2-4 Buffalo Bills, but the time for moral victories is drawing to a close: the Bills face the possibility of an 0-3 start in the AFC East if they can't upset the 3-2 Miami Dolphins in Week 7. Here's our full preview of the critical division matchup.

The Buffalo Bills may be only 2-4 and firmly in the cellar of the AFC East once again, but there's a lot to like about this football team. They're competitive; five of their six games have been decided by one score or less. They're surprisingly consistent; only undefeated Denver has scored at least 20 points in every game this season, and they rank No. 3 in the NFL in rushing despite playing five straight games against Top 10 run defenses. They're entertaining; aggressive on both sides of the ball, the Bills find ways to make plays despite crippling injuries at several key positions.

In the end, however, the record is what matters most - and the Bills have a heck of a battle waiting for them in the Miami Dolphins this Sunday. They'll need to win that battle to avoid not just a third straight loss to a division opponent, but the franchise's worst record after seven games since their 0-7 start in 2010.

Keep up with all of our Week 7 coverage

Each time the Bills play one of their AFC East rivals, this painful statistic is revisited and updated: the Bills are 25-59 in the division during their 13-years-and-counting playoff drought, and they're already 0-2 after a Week 1 loss to the New England Patriots and a Week 3 loss to the New York Jets. Making matters worse: the Bills have struggled to perform in South Beach recently.

Buffalo is 1-4 in their last five road visits to Miami, and they've been outscored 136-61 in those contests. Their lone victory, a 17-14 win in 2010, was aided by the Dolphins' four missed field goals that afternoon. Buffalo has been held to 17 points or fewer in each of their last seven games in Miami, with a December 4, 2005 matchup the last time they broke 20 points. You may remember that as the Chris Chambers game, when Miami's top receiver at the time went off for 15 receptions, 238 yards and a late touchdown in a 24-23 Miami win.

Another factor working against Buffalo this week: they have lost six consecutive road games (two of them this season in New York and Cleveland), and 15 of their last 17 road games overall. That's an awful lot of history and bad trends that the Bills will need to buck this Sunday - and they'll be doing so with a backup quarterback under center for a second straight week.

Count former NFL defensive end Stephen White, now a NFL analyst for SBNation.com, among the many that were impressed by Thad Lewis in his first Bills start, a 27-24 overtime loss to Cincinnati last week. White wrote of Lewis' three-touchdown performance, "Let's be clear: the Bills weren't in this game because of some crazy bounces of the football, they were in it in large part because Lewis played his ass off. The Bengals defense is pretty damn good, I might remind you, but the kid was as cool as a cucumber."

In the latest episode of the Buffalo Rumblings Podcast, we recap the Bills' loss to Cincinnati and preview the Dolphins game. Give it a download, and let us know what you think of the show!

Lewis was certainly impressive in completing 19-of-32 passes for 216 yards with two touchdowns, adding a three-yard rushing score and losing one fumble on the afternoon. His presence kept the Bills competitive, but it did not change the narrative of who the Bills are offensively: they're a run-first offense, as exemplified by their league-leading 35 rushing attempts per game.

Buffalo has surpassed 100 rushing yards (actually, they've surpassed 120 rushing yards) in each of their first six games, something they haven't done since 1993 - the last in a four-year stretch of Super Bowl appearances. The Bills currently rank third in the NFL averaging 148.8 rushing yards per game, and have maintained that figure despite a stretch against some of the league's stingiest run defenses. In their last five games against Top 10 run defenses, the Bills have surpassed their opponents' season-long per-game rush yards allowed average by 59 yards per game.

Miami ranks 15th against the run at present, allowing 105.4 rushing yards per game. They will obviously make slowing down Fred Jackson, Tashard Choice and a hobbled C.J. Spiller their top priority. Even while Buffalo runs the football, however, they're only going to be able to score with regularity if they can make big plays in the passing game. Lewis will need to continue his hot streak in the face of an outstanding Dolphins pass rush led by Cameron Wake and featuring underrated defensive lineman Jared Odrick and rookie first-round pick Dion Jordan. 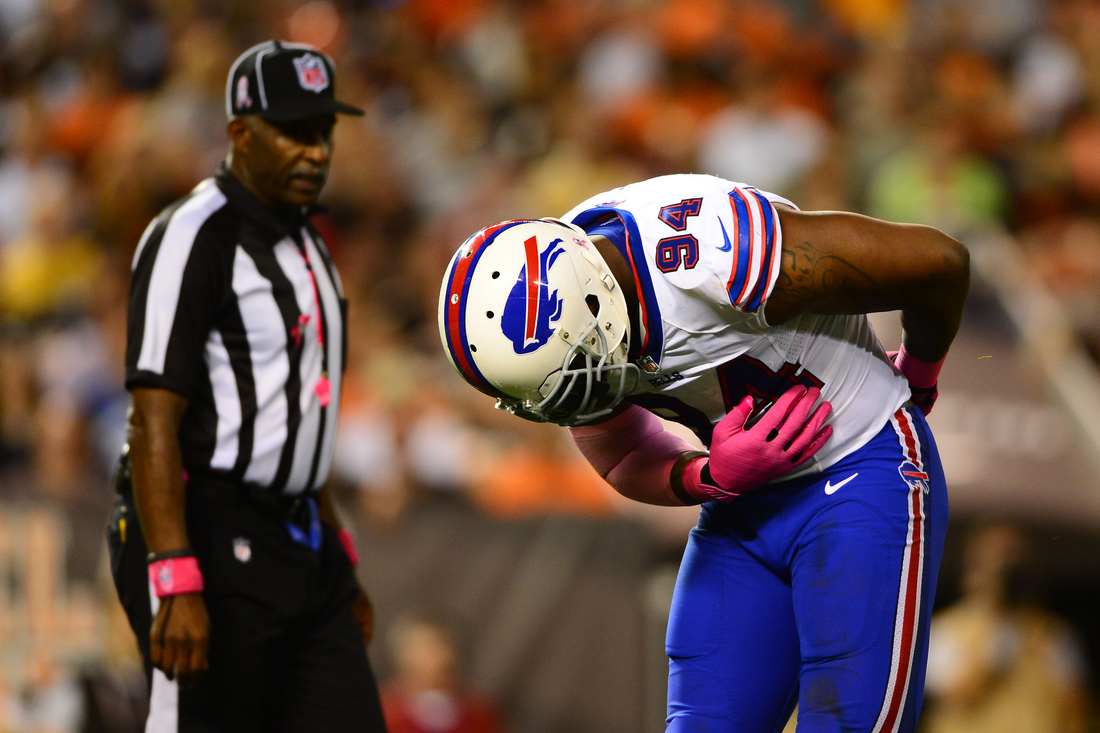 No quarterback has been sacked more than Ryan Tannehill this season, even as Tannehill has played one game fewer than many of his positional peers. Sacked 24 times in five games, the Dolphins have protection issues up front and a quarterback that still holds onto the ball a bit too long at times. Mike Pettine, orchestrator of a Bills defense that ranks fourth in the NFL with 21 sacks at the moment, has to believe that his team will be able to pressure Tannehill this Sunday. The Dolphins are especially iffy at tackle, where the likes of Mario Williams (third in the league with eight sacks), Manny Lawson and Jerry Hughes will match up against Jonathan Martin and Tyson Clabo.

Miami struggles to run the football, as well, averaging just 69.6 yards per game this season. The problems once again start up front, but the Dolphins aren't giving enough touches to top tailback Lamar Miller (4.2 yards per carry, compared to Daniel Thomas' 2.6), either. Buffalo's run defense ranks 28th surrendering 124.2 yards per game, so something has to give on that front.

Most importantly for Buffalo, they need to stop giving up big plays - particularly against a team like Miami that needs those chunk yardage plays to compensate for weaknesses in other areas. The Bills have given up eight runs of 20-plus yards this season and nine passes of 40 or more yards, the second-highest figure in the NFL. The Dolphins employ one of the best big-play receivers in the NFL in Mike Wallace, and the underrated Brian Hartline is capable of hurting teams over the top, as well. Buffalo's goal will be simple this week: eliminate the big plays, and let the rest of the game take care of itself. That, of course, is much easier said than done, particularly with Aaron Williams still out of position at cornerback, Stephon Gilmore still likely wearing a club on his surgically repaired wrist, and Jairus Byrd still easing his way back into the lineup.

Capitalizing on their consistent running game, the Bills are taking shots deep this season - and with a fair amount of success. Three of the team's seven passing touchdowns, including both of Lewis' strikes against Cincinnati, came on a four verticals concept that Doug Marrone and Nathaniel Hackett have incorporated from Marrone's days with Sean Payton in New Orleans. Flip through the gallery above for a look at those three touchdowns. Full write-up

Miami may have problems protecting Tannehill, but all they need to do is take a look at last week's performance by Cincinnati for a workaround: the Bengals killed the Bills with screens to the perimeter of the defense, ripping off huge chunks of yardage on those plays throughout the game. The Dolphins don't do much of this offensively, but you can expect to see Tannehill making a lot of quick throws away from Bills blitzes in Week 7 - and the Bills had better have found a way to adjust by now. Full write-up

TE Charles Clay. As a little-used rookie in 2011, Clay gave the Bills fits, catching five passes for 99 yards and a touchdown in two Dolphins wins. (Buffalo didn't see Clay at all in 2012, as he was injured for both contests.) Now Miami's starting tight end thanks to a season-ending injury suffered by starter Dustin Keller, Clay has emerged as one of Tannehill's favorite targets. He's one of four Dolphins receivers to have hauled in at least 20 passes through five games, and has scored in each of Miami's last two games. Clay and Brandon Gibson (who is questionable with a hip injury) are the inside receivers in Miami's offense, and given his history against Buffalo, Clay is a player the Bills should be wary of.

DT Paul Soliai. You're not likely to hear Soliai's name mentioned too often on Sunday's broadcast because of big plays, but he is the key player along Miami's excellent defensive line, and the most important part of the team's run defense. A mammoth of a man (6'4", 355 pounds) that commands double-teams, Soliai makes life easier for his more heralded fellow lineman, Randy Starks, as well as the team's expensive linebacking duo of Dannell Ellerbe (doubtful for this game with a shoulder injury) and Philip Wheeler. Buffalo's interior offensive line - featuring new starting left guard Doug Legursky - will have their hands full dealing with Soliai. 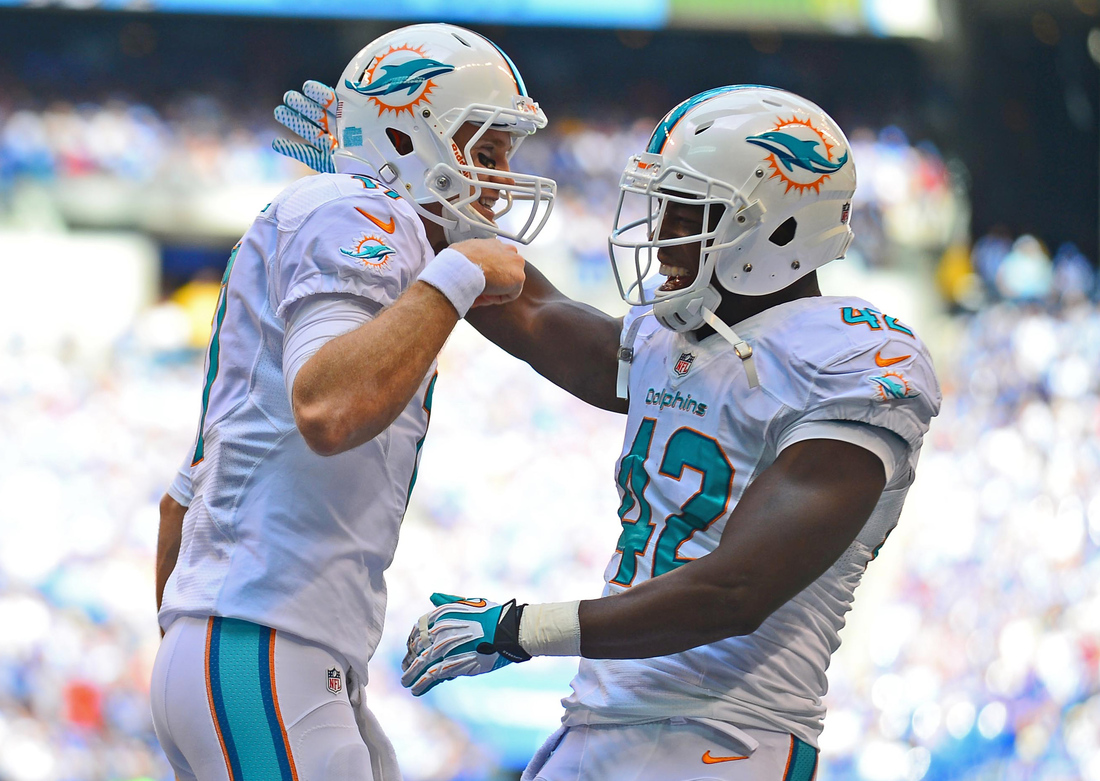 WR Stevie Johnson. Scheduled to return to the lineup this week after missing most of the last two games with a back injury and a death in the family, no one is happier to see Johnson back in action than Robert Woods, whose production has dipped considerably as the Bills' top receiver. Johnson has some work to do, however, to re-establish himself as a factor against the Dolphins, who have held him to an average of four catches for 55 yards in their last four meetings. It's not often that a team's well-compensated, outspoken top receiver is on any sort of sleeper list, but Johnson could be poised for a dramatic entrance in his return to the field on Sunday - and his importance to Buffalo's passing attack remains under-appreciated.

K Dan Carpenter. Signed as a last-minute addition prior to Week 1 to account for an injury to rookie kicker Dustin Hopkins, Carpenter has been nothing short of spectacular for the Bills this season. He's 12-of-13 on field goal tries through six games, including 3-of-3 from 50-plus yards, and has steadily improved on kickoffs, as well. This week, Carpenter will return to Miami to play against the team that got rid of him for their own hand-picked rookie, Caleb Sturgis, this past off-season. If it's a close game and the Bills need a field goal late, it'll be a bigger and more interesting stage than usual for Carpenter.

This matchup favors the Bills in several areas, most notably in the running game on both sides of the ball. Both teams are known to give up big plays defensively, but both can make them offensively, as well. The Bills are a bit more consistent in certain areas, but especially considering the injury situation, the Dolphins are the more physically talented team. Ultimately, the fact that Miami is coming off a bye week - even though they've also lost two straight contests - while the Bills are still dinged up helps the Dolphins' cause, as does playing in SunLife Stadium, where the Bills have not played well in quite a while. This is another winnable game for the Bills, make no mistake about that; they've just got an uphill climb to get there. Dolphins 24, Bills 16