Ben Roethlisberger was decidedly imprecise on the Steelers' first drive against the Bills, allowing Jairus Byrd to pick off a pass and set up a Buffalo field goal to open up the scoring in Week 10.

Test how precise your football knowledge is by playing the Precision Play of The Week for a chance to win Super Bowl tickets – brought to you by Gillette Fusion ProGlide, precision comfort, even on sensitive skin.

The Buffalo Bills didn't make many great plays in Sunday's 23-10 loss to the Pittsburgh Steelers. They did, however, open up a 3-0 lead in the first quarter when free safety Jairus Byrd intercepted a Ben Roethlisberger pass and returned it 57 yards to set up the score. Here's how the play happened: 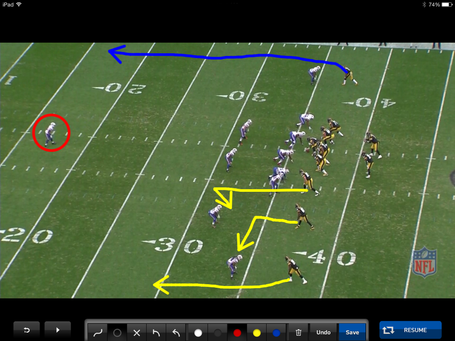 Above, you can see the route combination that the Steelers had called. With three receivers to the left side of the formation and a single-high safety (Byrd), Roethlisberger keyed in on the throw to the right side of the formation, where it looked like he'd have rookie speedster Markus Wheaton one-on-one against Leodis McKelvin. All Roethlisberger had to do was keep Byrd off the route long enough to have a winnable matchup. 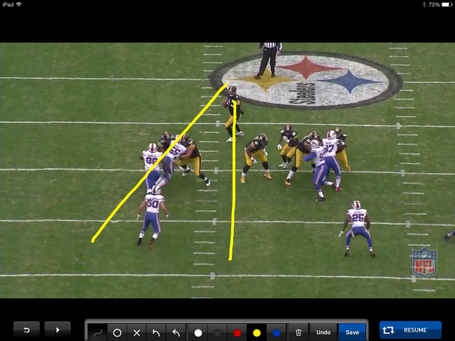 Roethlisberger does nothing to either move Byrd to the left side of the offensive formation, or even to freeze him in center field. Byrd can see that the three routes to the left aren't moving vertically, so he has no reason to move to his right, and there's nothing doing in center field, either. Roethlisberger is clearly going to be throwing the go route up the right sideline. 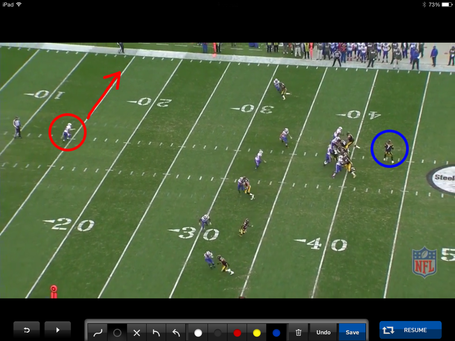 Here, Byrd has already started breaking down the 15-yard line on the route that Roethlisberger hasn't even set up to throw yet. The play is already over; all Byrd needs to do when he arrives is catch the football. 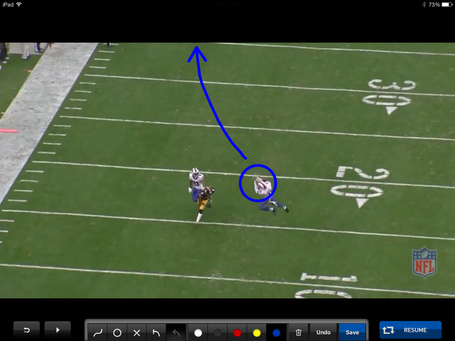 Byrd makes the catch - he's helped a bit by the fact that Roethlisberger doesn't get the ball downfield far enough - and is off to the races up the left sideline. This was a nice play by Byrd, a bad one from Roethlisberger, and fortunately for Pittsburgh, the inept Bills offense couldn't turn this into seven points despite the great drive start.