After a 2-2 start, the Buffalo Bills are 1-5 in their last six games and are coming off of their ugliest loss of the season last week in Pittsburgh. This week, the Bills can redeem another ugly loss - to the New York Jets in Week 3.

Things have not been going particularly well for the Buffalo Bills lately.

The Bills are 1-5 in their last six games, falling to 3-7 after a 2-2 start. In their last performance, a 23-10 loss to Pittsburgh, the team experienced by far their roughest-looking outing of the season, particularly from rookie quarterback EJ Manuel. It was a performance that riled up the fan base after two-plus months of moderate approval despite the team's record, and the environment around the franchise could darken quickly if the struggles continue.

Making matters worse, the Bills are about take on a New York Jets team that thoroughly dominated them in a 27-20 Week 3 win; Buffalo was in that game almost exclusively because of the generous heaping of turnovers (two) and especially penalties (20 for 168 yards) that New York provided. Sitting at 5-4, the Jets are primed to make a playoff push behind their excellent defense, a solid running attack and opportunistic play from rookie quarterback Geno Smith.

This is not a matchup that shapes up well for the home team, but the friendly confines of Ralph Wilson Stadium are a worthy discussion-starter for this Week 11 matchup.

Keep up with all of our Week 11 coverage

A tough out at home

When a team is 3-7, they're probably not particularly good either at home or on the road. That is the case for the Bills; they're a dismal 1-4 on the road this season, but aren't much better sitting at 2-3 in games played in Orchard Park. That is not, however, the whole story.

Of Buffalo's three home losses, one was a two-point defeat at the hands of New England in the season opener, and another was an overtime loss to AFC North leader Cincinnati with backup quarterback Thad Lewis under center. (A third loss, to undefeated Kansas City two weeks ago, was a 10-point defeat with third-stringer Jeff Tuel in the lineup.) They beat the currently 6-3 Carolina Panthers on a last-second score in Week 2, and the defending champion Baltimore Ravens by a field goal two weeks later.

Only one of the Bills' four losses by 10 or more points has occurred at home. They average 171.8 rushing yards per game at home, as opposed to an average of 109.6 yards rushing on the road, and have forced 10 opponent turnovers at home, with just six coming in away games. The Bills are very clearly a more competitive team at home than on the road this season, and they'll need to keep that trend a trend if they're going to beat a Jets team that controlled the action from start to finish in the first meeting.

In the latest episode of the Buffalo Rumblings Podcast, we recap the Bills' loss to Pittsburgh and preview the Jets game. Give it a download, and let us know what you think of the show!

With a rookie quarterback under center - that's pretty much been true each week this season, even as the Bills have been forced to start three different players there - the Bills are a run-first offense. A 241-yard effort against Kansas City has been the lone aberration of the past month, as Buffalo has been held under 100 rushing yards as a team in three of their last four games. This week, they'll try to produce against a Jets defense that ranks No. 1 in the NFL in both yards allowed per game (73.8) and yards allowed per rush attempt (3.1).

In fact, the Jets have only given up over 100 yards rushing to a team once this season - in Week 3 against the Bills, who needed a 59-yard Houdini act from Fred Jackson to even get there. Without that run (which, yes, was a fantastic play from Jackson), the Bills may have been held to under 60 yards on the day. C.J. Spiller was particularly ineffective in that contest, gaining nine yards on 10 carries.

It will not be easy for the Bills to get right in the running game against a Jets defense led by one of the league's best defensive lines. Muhammad Wilkerson, Sheldon Richardson, Damon Harrison, Quinton Coples, Kenrick Ellis and Leger Douzable are all capable of making plays up front for Gang Green, giving the Jets an embarrassment of riches up front (and of those six players, four of them are 25 or younger). The Jets' game plan will be simple: stop the run again and force the game into Manuel's hands.

The Jets' job will be made easier by the fact that the Bills will likely be without their top two receivers, Stevie Johnson (groin) and Robert Woods (ankle), in the contest. It's possible that Manuel will be trying his hand at a rebound performance without much of a running game and T.J. Graham and Marquise Goodwin serving as his top wideouts. You'll see an increased emphasis on Scott Chandler and Chris Gragg at tight end, and the backs out of the backfield, but they'll hardly compensate for what is already missing. Rex Ryan will give Manuel rush looks that he hasn't yet seen at the NFL level, and there may not be enough receiving talent to bail Manuel out. Long story short: things look pretty bleak for the Bills offensively on Sunday, especially if they can't find a way to run the football. 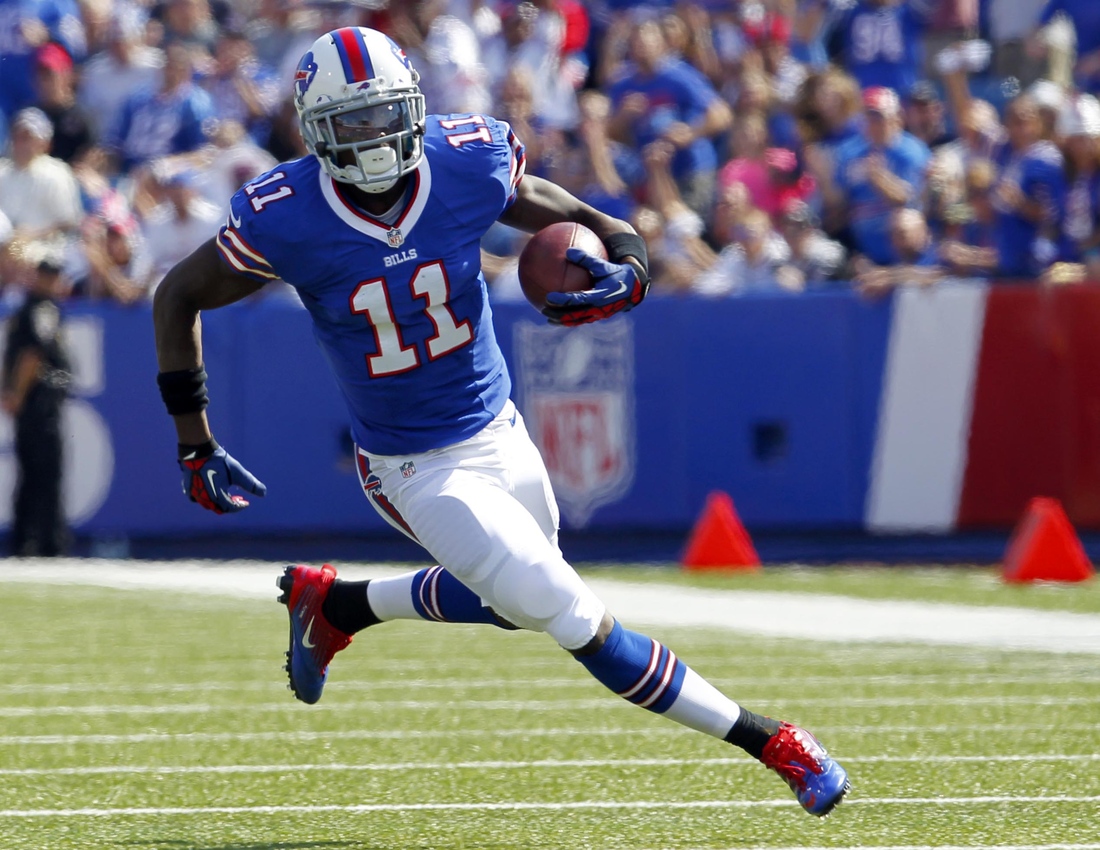 Here, at least, the Bills have a chance for a major turnaround from what we saw against the Jets in Week 3. In that game, Smith threw for two long touchdowns and several more big plays against a depleted Bills secondary that didn't have Stephon Gilmore, Leodis McKelvin or Jairus Byrd in the lineup. Aaron Williams played cornerback most of the day, and Justin Rogers - who has been inactive for the past several weeks - was the team's top (and oft-attacked) cornerback.

Buffalo is obviously much healthier in the secondary, and while they've still had their share of struggles on the back end - Gilmore, in particular, has been picked on by the Bills' last two opponents - they're also obviously significantly better than they were in Week 3. Add in a pass rush (keyed of late by Kyle Williams, Marcell Dareus and Jerry Hughes) that is still humming along nicely - the Bills still rank second in the NFL with 33 sacks, even as Mario Williams has been blanked for two weeks running - and Buffalo will almost certainly be better against the pass than they were in the first matchup.

The real story of that game, however, was the Jets' running attack. Bilal Powell, of all people, ran for 149 yards on the day, and the Jets have only gotten better on the ground with the emergence of Chris Ivory. Buffalo, meanwhile, has looked relatively soft against the run for long stretches in recent games against Miami, Kansas City and Pittsburgh. Buffalo will want to attack Smith and force turnovers - the Jets are minus-11 in the turnover department in their four losses, after all - but they'll struggle to do so if they can't first stop the run.

Give the Jets some credit, too, for what they've been able to accomplish offensively with an inconsistent rookie quarterback and a slew of replacement-level receiving options brought in to account for injuries (one of which you'll recognize, and is discussed below). The Jets will get another big break this week with Santonio Holmes returning to the lineup at receiver.

Marty Mornhinweg, the Jets' offensive coordinator, has been forced to get creative in recent weeks with top skill players sidelined by injury. True, he's getting help from that defense and an improving running game, but he's also dialing up some creative play calls out of a two-back shotgun formation, some Pistol sprinkled in, and a new Wildcat package featuring October free agent signing Josh Cribbs. Take a look above at how these new wrinkles picked up big chunks of yardage in an upset win over New Orleans two weeks ago. Full write-up

Circling back to the Jets' defense, flip through the gallery above for an in-depth look at how they completely erased Spiller from the land of big plays in Week 3. You'll note that there was nothing done specifically from a game plan standpoint on Ryan's part; his defense was simply dominant at the point of attack, Spiller was trying to do too much, and Buffalo's run game play calling was a little too predictable before Spiller exited early with a knee injury. Buffalo can ill afford a repeat performance of what you see above. Full write-up

WR David Nelson. You'll likely remember Nelson if you've watched any Bills games in the past four years; Nelson is the 6'5" former undrafted slot receiver that was unceremoniously allowed to leave as a free agent this past offseason. After an injury prevented him from making the team in Cleveland this past summer, Nelson latched on with the Jets last month and has surprised pretty much everyone that wasn't aware of his skill from his days in Buffalo. You can bet that Nelson (16 receptions for 199 yards in five games with the Jets) will be chomping at the bit to turn in a big performance against his former employer.

S Ed Reed. Long renowned as one of the best safeties to ever play the game, Reed is a shell of his former self, and was released by the Houston Texans just this week. He signed with the Jets and his former coach in Baltimore, Ryan, on Thursday, and is expected to play on Sunday against the Bills. He won't start, and may only appear in specific packages, but given the way the Jets match up against the Bills, would it really surprise anyone if we saw a rushed, floated pass end up in Reed's arms on Sunday? 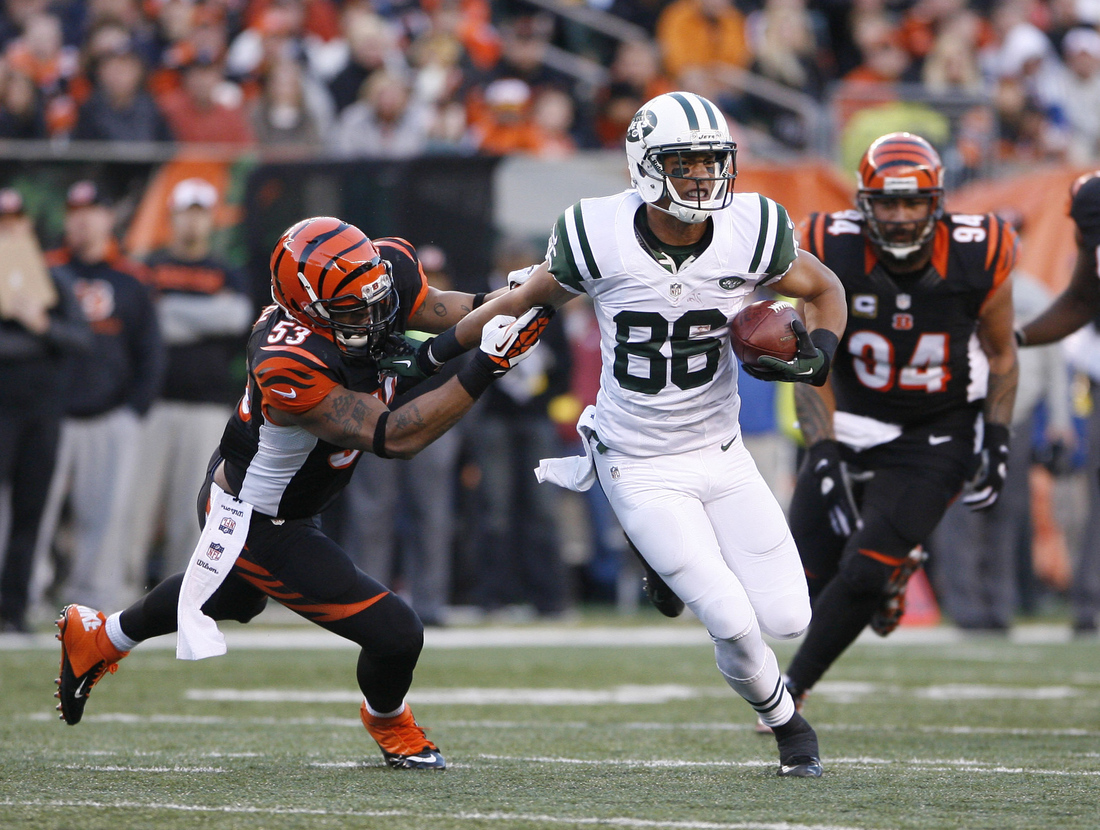 WR Marcus Easley. Buffalo's reserve receivers will have plenty of chances to shine with both Johnson and Woods out of the lineup, and while Graham and Goodwin will see the most playing time, Easley has the best chance to shine among the quartet of receivers likely to play. Graham and Goodwin are speed guys, sequestered to running outside in Buffalo's offense, so Easley and Chris Hogan will see plenty of time working out of the slot, where Easley's 6'2" frame and above-average speed could lead to him turning in a sneaky-good performance. Bills fans have been waiting for Easley's break-out performance for four years; the opportunity is now sitting in front of him.

CB Nickell Robey. One of the more pleasant surprises for this Bills team in a down year, Robey is squarely on most Bills fans' radar right now, but the nickel cornerback is worth mentioning as a sleeper this week based on what we saw in Week 3. He played 45 snaps in that first game against the Jets, and had at least two instances in which he just missed jumping a route to make a big play. We saw him do just that in a win over Miami, and he has the ability and the opportunity for another one this week.

Buffalo needs a big performance out of its defense to win when the offense is struggling as badly as they are almost certain to do on Sunday. That has been true for several weeks, as the Bills have shuffled quarterbacks in and out of the lineup, and they've gotten just one such performance - a three-turnover fiesta in that win over Miami. Otherwise, Buffalo's defense has ranged between good (see: Kansas City, who didn't turn the ball over) and bad (see: stretches against New Orleans and, well, everybody else). It's hard to envision the Bills doing enough offensively to win this game, but if the defense can force turnovers against the streaky Smith and hand the offense short fields, that could be enough to pull the upset. Jets 20, Bills 13