The 4-7 Bills are still alive in the AFC wild card chase, and begin their quest for a spot in the post-season by hosting the Atlanta Falcons in Toronto tomorrow afternoon.

Things have gone fairly well for the Buffalo Bills of late.

In their last live game action, they blew out the New York Jets, 37-14, to improve to 4-7 and keep themselves in the thick of a crazy AFC wild card playoff chase. Since then, teams in that chase that needed to lose have lost, and when the Bills take on the Atlanta Falcons this Sunday at the Rogers Centre in Toronto, they'll do so in need of a win to keep themselves one game out of the conference's final wild card slot.

Matt Warren has your Week 13 rooting interests covered - there are still several very important games to be played this weekend - but if the Bills can't hold serve and defeat a struggling, 2-9 Atlanta team, all of the playoff talk that occurred through Buffalo's bye week will have been for naught.

The stakes are high, but the mood around Buffalo is on the rise, as well. The Bills are healthier than they have been all season - defensive lineman Kyle Williams is questionable with a tweaked back, which represents the most serious injury on the 53-man roster at the moment - and they're trying to sell that win over the Jets as a season-changer. That very well could be the case, considering that the Bills' next four opponents (Atlanta and the three teams from Florida) are a combined 12-32 entering Week 13.

Keep up with all of our Week 13 coverage

Keep those positive vibes about the Bills' season in mind as best as possible, because the fact that this game is being played in Toronto puts a serious damper on Buffalo's playoff chase.

The Bills are 1-4 in five regular season games in Toronto, with their last appearance north of the border a 50-17 shellacking at the hands of the Seattle Seahawks last December. Circumstances have changed - this is a very different Bills team, and the 2013 Falcons aren't remotely in the same class as the 2012 Seahawks - but the venue hasn't. This is a series that current, well-respected Bills players like Eric Wood have openly panned in the past, after all.

Buffalo's lone win in Toronto came during the 2011 season, when they blanked the Washington Redskins, 23-0, to improve to 5-2 that season. Those Redskins wound up finishing 5-11, and are the only team with a losing record that the Bills have ever played at Rogers. Atlanta will be the second.

In the latest episode of the Buffalo Rumblings Podcast, we recap the Bills' win over the Jets and preview the Falcons game. Give it a download, and let us know what you think of the show!

For the first time since Week 1, the Bills will have their full contingent of offensive skill players healthy and in the lineup. EJ Manuel is back in the saddle at quarterback, and is coming off of his best performance as a pro against the Jets (20-of-28, 245 yards, two touchdowns, no turnovers and a 121.9 rating). Fred Jackson and C.J. Spiller are healthier than they've been since the very early portions of the season. Stevie Johnson and Robert Woods are recovered from injuries and will line up next to Marquise Goodwin and T.J. Graham at receiver. (And though they're not skill players, it's also worth noting that Buffalo's current starting offensive line has played five straight fully healthy games together.)

That's the good news. The better news is that there is genuine belief in the building that One Bills Drive that Manuel has taken his first major step as a pro quarterback, and is ready to close his rookie season on a hot stretch; those efforts will be aided by line continuity and a full repertoire of passing game targets. If the Bills are going to make a playoff push, however, they need to fix their suddenly-problematic running game - and this might be the perfect week to do so.

Atlanta comes into this contest ranked 29th against the run, surrendering 130 yards per game at 4.6 yards per rush (tied for 27th in the league). That's good news for Jackson (24 carries for 89 yards in his last two games) and especially Spiller (21 carries for 29 yards in the same time frame), who have been non-factors offensively since exploding to combine for 254 yards from scrimmage in Week 9 against Kansas City. The Bills still rank fifth in the NFL with a rushing average of over 134 yards per game, but after being held to under 100 yards as a team in four of their last five outings, they've looked more like a middle-of-the-pack outfit.

Manuel carried Buffalo's offensive essentially by himself in the win over the Jets, but that won't be a recipe for success if the team wants to sneak into the playoffs. Buffalo needs its dominant running game back. The hope is that two healthy backs and a reprieve from playing against some of the NFL's best run defenses will aid that effort; starting with Atlanta should help. Without a running game, teams will be able to amp up the pressure on Manuel - and even against teams like the Falcons, who struggle to pressure opposing quarterbacks, that's something the Bills should try to avoid. 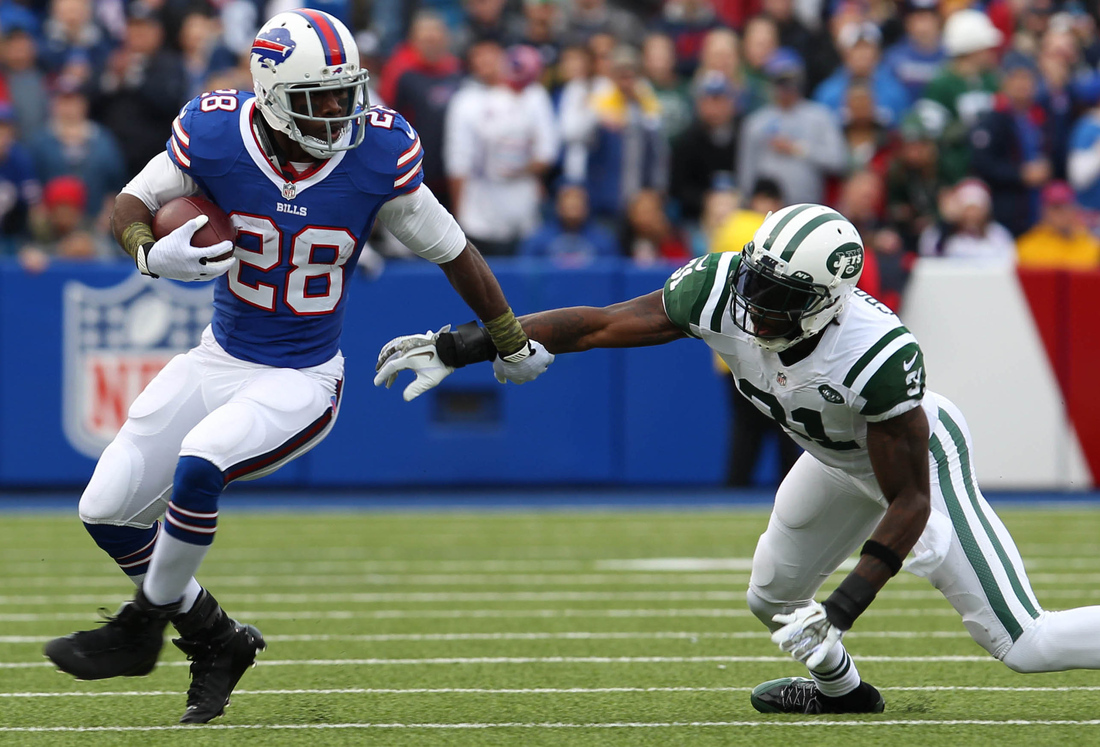 As healthy as the Bills are now on offense, the Falcons are just as unhealthy. Atlanta's offense suffered a major blow early in the season when receiver Julio Jones was lost for the year, and they have yet to recover. Making matters worse: the injury struggles of receiver Roddy White and an offensive line that has left tackle Sam Baker and, had he made it to the regular season, right tackle Mike Johnson on Injured Reserve.

The story of Atlanta's offense begins up front: star quarterback Matt Ryan has been sacked 24 times this season, well above his usual pace, and has been hit much more frequently than that. They also rank 31st in the league with just 74.7 rushing yards per game, though that figure is certainly aided by playing with a lot of fourth-quarter deficits. Those two issues have compounded into Atlanta relying heavily on receiver Harry Douglas and future Hall of Fame tight end Tony Gonzalez for their offensive production, with mixed success.

On paper, this is a matchup that the Bills should win. Buffalo is currently tied for the NFL lead in both team sacks (37) and interceptions (16), and they've gotten notably better at preventing big gains with the likes of Jairus Byrd and Stephon Gilmore back in the lineup. All of a sudden, this Bills defense is one of the better young outfits in the league, spearheaded by its defensive line (featuring the aforementioned Kyle Williams, Marcell Dareus and Mario Williams) and featuring playmakers in the back seven.

Buffalo's task will be simple on Sunday: ensure that the Falcons stay one-dimensional, do what they can to disrupt the Falcons' screen game (where Kiko Alonso and Nickell Robey have excelled all season) and the rhythm of their short passing game, and then tee off on Ryan. Third down defense will be especially critical, as Ryan is the type of efficient thrower that can keep defenses on the field for long stretches if they're not at the top of their game.

Buffalo's problems running the football of late are many and varied, ranging from poor play from the running backs to bad blocking up front - and, in the case of Spiller, including predictable play-calling. The gallery above goes into further specifics about those issues as they cropped up against the Jets; these are the issues that the Bills will be trying to resolve on the fly against the Falcons. Full write-up

When Buffalo's defense is clicking, the Bills are able first to pressure quarterbacks, then to place coverages behind that pressure that bait quarterbacks into making mistakes. That's exactly what happened against Geno Smith (four turnovers). Ryan is not nearly as turnover-prone as his rookie counterpart, but has thrown two or more interceptions in three of his last five games. Don't expect Buffalo to deviate much from what you see above on Sunday. Full write-up

WR Darius Johnson. Knowing that the Falcons are going to try to get the ball out of Ryan's hands quickly, Johnson is a name to pay attention to. The 175-pound slot receiver caught six passes in the Falcons' loss to New Orleans last Thursday, raking in a lot of underneath throws from Ryan as Atlanta opted for a ball-control passing attack. The approach should be similar against the Bills' ferocious pass rush, and Johnson could again see a lot of targets this week.

LB Joplo Bartu. Atlanta found themselves a playmaking outside linebacker this past spring among the ranks of the undrafted. A product of Texas State, Bartu quickly assimilated to the pro game and emerged as a starting linebacker for the Falcons; he has since accumulated 57 tackles and 3.5 sacks as a rookie. As Atlanta's strong-side linebacker, Bartu will figure heavily into the equation as the Falcons try to prevent the Bills from re-establishing their running attack. 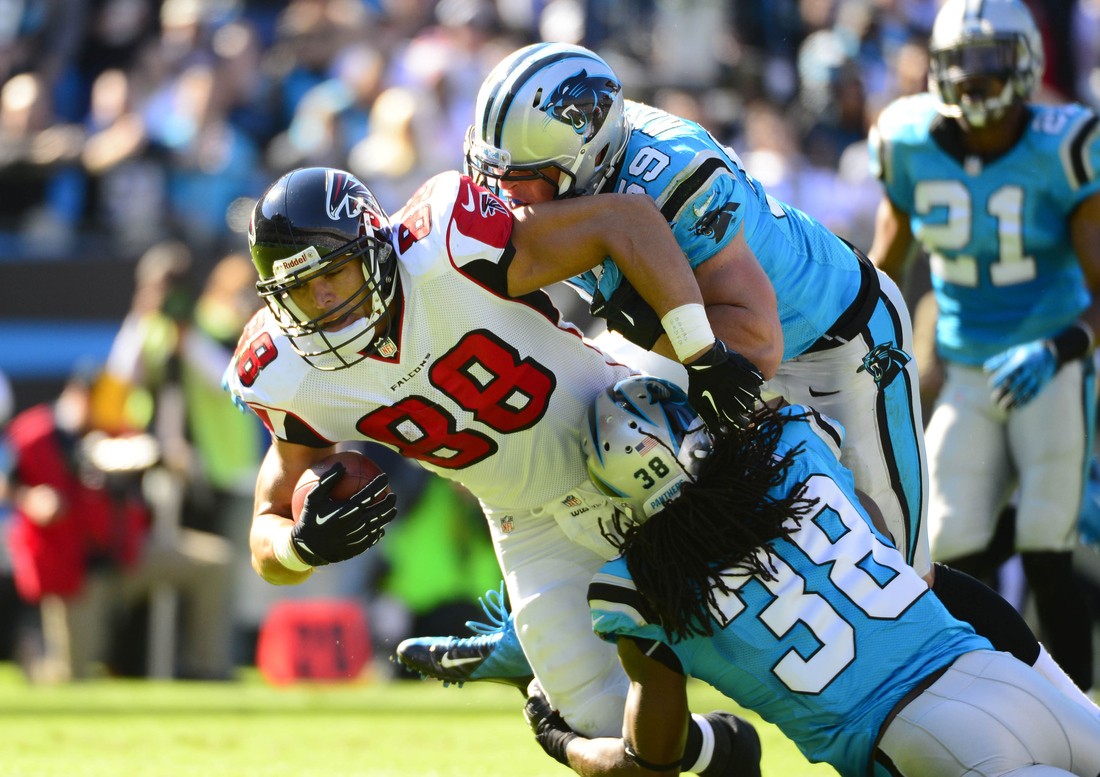 TE Scott Chandler. Buffalo's top red zone threat has not scored a touchdown since October 13 against Cincinnati. Now that the Bills have a healthy stable of skill players, Chandler's streak of games without a score should end soon. In his two career games in Toronto, Chandler has recorded a combined seven catches for 93 yards and two touchdowns, both of which came in 2011 against Washington. He's due.

S Da'Norris Searcy. As the Bills have gotten healthier in the secondary, Searcy has quietly stepped into the nickel linebacker role that veteran Bryan Scott handled for so long. It's an in-the-box role that suits Searcy's strengths as a player, and though his playing time has dipped dramatically, he's playing very well at the moment. He'll be in the area of the field where the Falcons have the best success attacking with the passing game, and will try to add to his Week 11 pick-six and 2.5 sacks this season.

Aside from the venue, which favors neither team, this is a matchup in which Buffalo holds an advantage in nearly every conceivable way (save for the quarterback position). They're the healthier team, they're the better team, and they're playing for much more at this point in the season. Buffalo should be able to get its running game on track, and the ever-improving defense should not be particularly challenged by an Atlanta offense without much of a running attack and with major pass protection issues. Then again, we've played the "should" game a lot with the Bills before and watched them lose. This is a prove it week for a young Buffalo squad: can they handle their business, or will they stumble early in their desperation bid for the post-season? Bills 24, Falcons 17