If Buffalo Bills GM Buddy Nix is serious about wanting a big, athletic No. 1-type wide receiver, then it's hard to imagine him not being interested in free agent Dwayne Bowe.

The Buffalo Bills need help at wide receiver. Specifically, they need a big-bodied receiver capable of playing on the outside, and one that complements the creative route-running of Stevie Johnson, the seam prowess of David Nelson and the deep speed of T.J. Graham. If they're looking for that type of receiver on the free agent market, the first name on their list should be Dwayne Bowe of the Kansas City Chiefs.

Bowe, who will turn 29 in September, has spent six seasons in Kansas City - the sixth of which he played on the franchise tag - and has hauled in 415 passes for 5,728 yards with 39 touchdowns in that time frame. Despite generally poor quarterback play, Bowe is a legitimate No. 1 receiver - and if he hits the open market, he'll likely be paid handsomely.

It's easy to pick games to review for receivers - particularly receivers on bad teams. With Bowe, I reviewed his four busiest games in terms of targets - Week 2 at Buffalo, Week 3 at New Orleans, Week 4 against San Diego and Week 12 against Denver. In doing so, I got to see 48 percent of Bowe's targets last season and 44 percent of his total receptions.

Bowe is an ideal fit for the West Coast offense, and in particular the variant of that offense that the New Orleans Saints ran while Doug Marrone was with the team (and still run today). His size, strength and solid quicks make him tough to cover in the intermediate areas of the field - particularly over the middle - and he's got the ability to separate deep, as well. Think of him as capable of doing what Marques Colston did for that era of Saints teams, plus what Robert Meachem did.

Take this example from the Bills game: 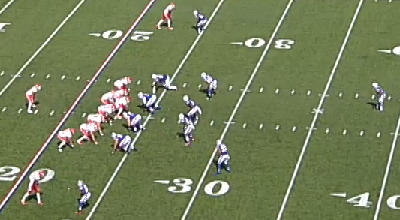 Bowe is lined up on the bottom of your screen across from Aaron Williams. (Now former) Bills strong safety George Wilson is lined up in the area where Bowe typically runs routes, as Buffalo anticipated this type of route out of this particular formation.

Williams and Wilson play over-under on Bowe as he runs a short post pattern toward the middle of the field. Note that Kansas City has just two receivers out in a pattern, while the Bills have six defenders dropped into coverage. 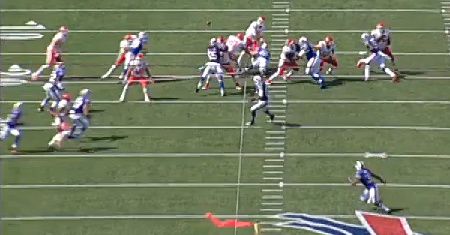 Wilson is in good trail position in the throwing lane with Williams over the top, but the coverage doesn't work - mostly because Wilson gets caught flat-footed underneath, but also because Bowe is such a tough cover on this type of route. Even with Wilson playing proper trail coverage, Bowe has enough length and leaping ability up the seam that he can make this play routinely with that much separation on the slant. 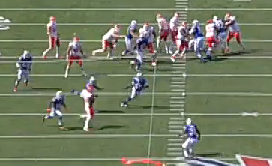 Bowe hauls in an easy grab for a strong gain despite the Bills having the clear schematic advantage on the play. This is the strength of Bowe's game - he goes over the middle and makes the tough grab, can pick up yardage after the catch, and plays a physical brand of football. He can run the whole route tree, and that makes him a legitimate go-to threat - but he's at his best working the seams, running after the catch and occasionally going up top.

One of the big knocks on Bowe is that he has bad hands... I saw a healthy sample size from a year ago and didn't see anything alarming in that department. He can high point the ball and make tough catches in traffic. Every receiver drops passes; Pro Football Focus credited Bowe with six drops in 114 targets last year, which is a very acceptable ratio. His hands don't concern me at all, though there were some up-for-grabs balls that I half expected him to come down with that he didn't.

Since everyone's talking about Bowe's perceived character weakness - i.e. concerns that he'll lower his effort once he gets a big contract - I wanted to get a baseline in that department, as well. Bowe works hard as a blocker in the running game, doesn't dog any routes and does the "dirty work" that most receivers like to avoid. Again, this is not an area of concern for me.

Finally, I'll leave you with this: it's tough to watch tape of Bowe from last season. Kansas City's quarterbacks were brutal; several times per game they just sort of heaved the ball in Bowe's general direction and expected him to make a play on it. As a result, Bowe took several huge hits throughout the season. Most receivers could not stand up to that type of beating. You'll never see me question Bowe's toughness. The guy's a baller.

The Chiefs should keep Dwayne Bowe - and if ESPN's Adam Schefter is right, that's exactly what they'll do, one way or another. Should they somehow fail to do so and Bowe hits the open market, I'll re-iterate what I said nearly two weeks ago: Bowe should be Buffalo's No. 1 target. There will be a point of diminishing returns if the 29-year-old's salary demands get too ridiculous, and there's always the fact that Bowe may not want to leave one franchise with severe quarterback problems for another. Purely from a schematic and style standpoint, however, Bowe is precisely what the Bills need at receiver.

But that's just my opinion. If you've studied Bowe lately, what's yours?