Jon Gruden loved an NFL-level read folded into a basic read-option play by Nathaniel Hackett at Syracuse. Here it is, explained and diagrammed.

Good job, Buffalo Bills fans - it's looking like a lot of you took the time to watch ESPN's Jon Gruden grill Syracuse quarterback Ryan Nassib on his Gruden QB Camp special, because my email Inbox is full of observations and requests centered around the show last night. In particular, folks have asked for a quick post going into detail on the play that Gruden and Nassib harped on most fervently: a read-option play that Gruden positively gushed about.

The play is a weak-side read-option run that singles out the strong-side defensive end, incorporates a bubble screen as a fail-safe to the play and adds in a "pop" wrinkle that Gruden loved. I've diagrammed a version of the play below; the run action will always be to the weak side of the formation, but the slot receiver and tight end can flip sides of the field, and obviously the play can be run to either side of the field. 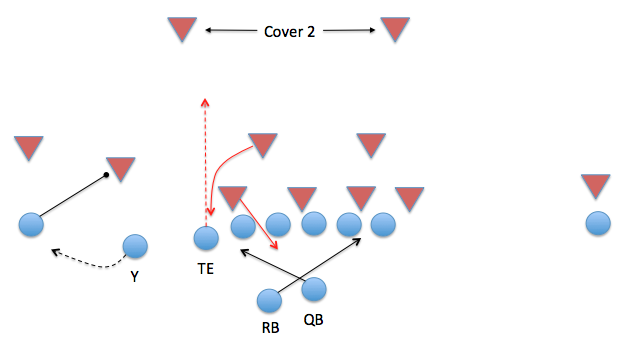 The diagram depicts the "pop" portion of the play that Gruden was so excited about, but that's only available with one defensive look - the Cover 2. The quarterback in the play needs to recognize that coverage pre-snap for the "pop" option to be feasible. Let's explain the play below.

When you get right down to it, this portion of the Nassib/Gruden show didn't have much to do with the quarterback - but we can apply it to what little we know about Bills offensive coordinator Nathaniel Hackett. Gruden loved that "pop" wrinkle against a specific look; it's an NFL-caliber read that's folded into a standard play to take advantage of a certain defensive look. The 33-year-old Hackett has developed a reputation as something of an innovator working under Doug Marrone, and this is just one small example of why that's happened.