Bills fans are still trying to figure out exactly what "hybrid defense" might mean.

I've got to hand it to the readers of Buffalo Rumblings. Y'all fill up my email inbox with such intricate and detailed inquiries that I can rarely cobble together a web-standard "mailbag" post, because answering just two or three of these questions could yield a 2,000-word monstrosity. Well done, indeed, Buffalo Bills fans.

"Brian - I loved the diagram used in your Ryan Nassib/Jon Gruden play breakdown last week. I was wondering if you'd mind doing something like that for this hybrid defense post you wrote after the Bills signed Manny Lawson. I'm still sort of confused about what you meant by it, especially the substitution part."

The below diagram illustrates how a typical transition from a base defense to a nickel defense occurs. 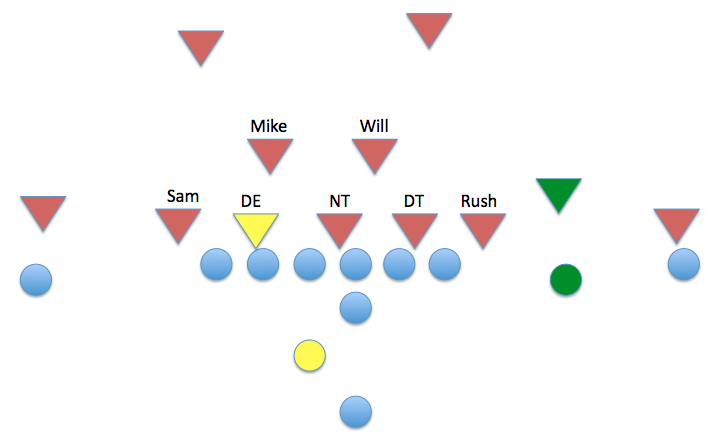 It's this simple: in the base defense, the yellow players are on the field; in a nickel defense, the green players are on the field. The other 10 players on defense (marked in red) remain the same. By comparison, last year's Bills defense would trot off two linebackers in favor of Bryan Scott and the nickel corner du jour. That might still happen if the team can't find a three-down capable linebacker (or two) in the 2013 NFL Draft.

But really, any base defense substitutes in a similar manner in an ideal scenario; one player goes off, another goes on. What makes the defense hybrid is its ability to switch between multiple fronts on a whim while still adhering to that minimum-substitution principle. The Bills don't want to have to trot Torell Troup onto the field every time they want to run a two-gap 3-4, just the same way they don't want Scott's presence to give away what kind of alignment they'll be playing. Pettine is all about disguise; it's easier to accomplish that when you're using the same personnel as often as possible.

By minimizing the amount of substitutions needed on a per-package basis and finding versatile personnel that can serve different functions, a prototypical hybrid defense can be achieved. I've said it before, and I'll say it again: the Bills need that base linebacker or two, plus a good rotational zero-technique nose tackle (I don't think Alan Branch is that guy) before they'll be able to run just about anything between a traditional, two-gap 3-4 and some of today's more exotic looks without much issue. That's obviously easier said than done, but the Bills already have a good amount of physical talent on defense.

If you're itching for more of these types of breakdowns, simply ask. I've been in an X's and O's mood of late - likely to avoid the rumors and smokescreens that accompany draft talk this close to the start of the thing - and will happily accept the distraction.