The 6'6", 325-pound athlete will help the Bills more easily switch between one- and two-gap schemes.

When news broke this morning that the Buffalo Bills were hosting free agent defensive lineman Alan Branch on a visit (he has since signed a one-year, $3 million deal), I had a few friends text me asking the same (paraphrased) question: why are the Bills looking at a defensive lineman? This post is how I'll answer those text messages: post, copy and paste, send.

We'll start with these two images. Take a look at the two defenses below and see if you can't discern the differences between them. The first picture features the 2012 Kansas City Chiefs defense, and the second is the Baltimore Ravens from the same season. 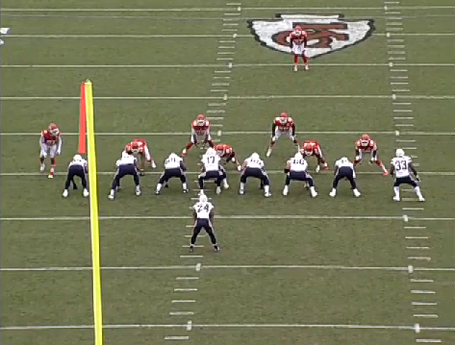 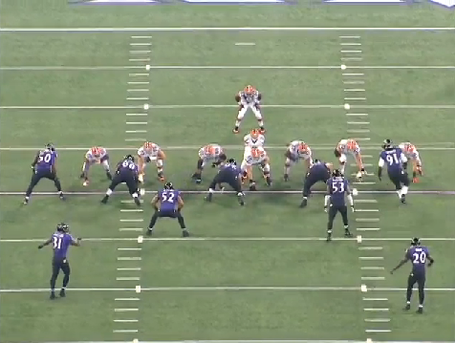 The defenses look pretty similar, no? Well, they're not; they're fundamentally different. The top photo is of a traditional 3-4 defense. The bottom is actually considered a variant of the 4-3. The biggest practical difference between the two - and this ties the post back into the Bills' interest in bringing in a player like Branch - is that the Bills can't play the defense that you see in the first photo. They don't have the personnel to do so (even after signing Branch; they still need inside linebacker help).

If you're still confused about the difference between the two defenses above, pay attention to the way the defensive linemen are positioned. The Chiefs, running a traditional 3-4 defense, have their nose guard lined up directly across from the center, and their two other defensive linemen are aligned directly across from the tackles. At the snap, the linemen will engage the blocker across from which they're aligned (along with any double-teams), and they're responsible for controlling the gap to either side of said blocker(s). In the bottom photo, Baltimore's nose tackle is lined up off of the center's shoulder, a defensive tackle is lined up off of the guard's outside shoulder, and the other lineman (to the left of the nose tackle in the still) is lined up on the outside shoulder of the tackle. This is a one-gap front, as the linemen are responsible for playing one gap rather than two.

That, folks, is the fundamental difference between "old school" and "new school" in the NFL. Two-gap defensive schemes are going the way of the dodo bird thanks to the pass-happiness of the league today; teams would rather play one-gap schemes most of the time because they get big, athletic defensive linemen penetrating gaps and pressuring the backfield rather than simply engaging and controlling blockers.

Branch is a valuable addition because he can do both: he can play two gaps, or he can slot into an under front as a one-gap player. Before his signing, the Bills' two defensive linemen locked in for a large amount of playing time - Marcell Dareus and Kyle Williams - profiled best as one-gap players. In fact, Williams is purely a one-gap player; the team will be in trouble if he's ever asked to play two gaps on a consistent basis. Dareus is capable of playing two gaps, but that wastes his natural athletic ability. Now, Dareus (and Branch, and perhaps Alex Carrington, though he's also better as a penetrator) can line up in a two-gap alignment, and they're capable of playing that system - which, at minimum, will help Pettine disguise looks.

Remember the hybrid defense adage we discussed after the Manny Lawson signing: if a player isn't elite, he'd better be versatile. Like Lawson, Branch is certainly not elite - but he is versatile, capable of playing one (off-shoulder from blocker) or two (on the blocker's nose) gaps, and allowing the Bills to more freely move around its more talented defensive linemen, especially on run downs, where Branch will likely get most of his playing time. That, friends, is why Branch was a target for the Bills, and why he was a sensible signing - even before we get to the idea that he might actually help the Bills play better against the run.