If you're trying to nail down Mike Pettine's defense, your takeaway should be this: if a Bills defender can physically do something, he'll probably be asked to.

One of the advantages of an NFL off-season that may soon be shortened is the ability to hit the tape and learn as much as we can about our favorite football team, the Buffalo Bills. That's doubly true with a new coaching staff and fresh offensive defensive systems in place for the 2013 season.

When we started this re-watch series (StoryStream here), one of my hopes was to be able to watch a ton of New York Jets games from the 2012 season to try to establish a hard definition of Mike Pettine's defense. I have since watched a ton of Jets games from the 2012 season and have a good handle on his defense, but to define it - or even to try to describe something so broad in scope - is a fruitless endeavor. The definition of Pettine's defense is that it's indefinable.

I did, however, start charting some of Pettine's tendencies during a re-watch of the New England game, and before I realized that diagramming all of his different looks would be rather like building an entire freaking playbook - and that's just from one game! - I came up with these four diagrams. They alone won't offer you any dramatic insight into the defense, but they do describe three main themes of Pettine's system.

This was the defense that the Jets used most frequently against the Patriots: a 4-2-5 nickel formation with 3-3-5 personnel. We talked about that defense in our last post - speculating that it could be the Bills' base defense this year - and projected Bills personnel into it. What follows are just a few variations of pass-oriented defenses. 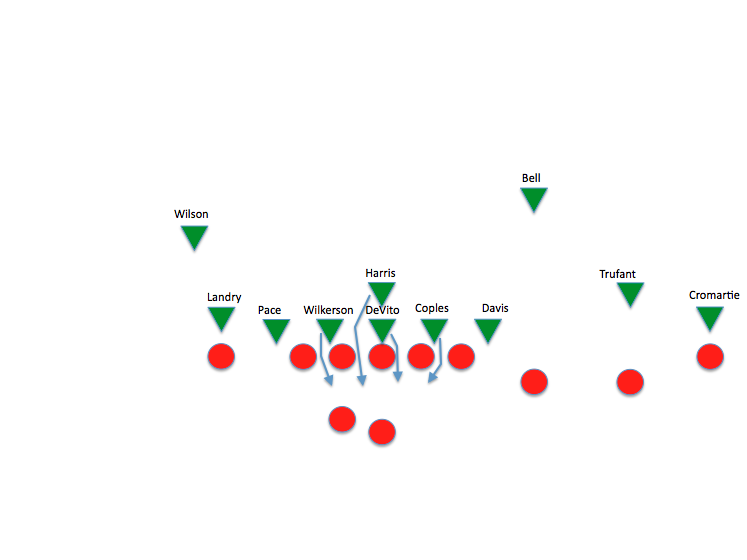 The Jets also used some nickel packages with one-dimensional defensive tackle Mike DeVito lined up on the nose, pass-rushing linemen Muhammad Wilkerson and Quinton Coples in a three-technique. Calvin Pace is the only edge linebacker on the field, with inside 'backer Demario Davis lined up outside on this down. With New England overloading their formation to one side of the field, the Jets put LaRon Landry on the line of scrimmage and threaten to blitz, but it's inside linebacker David Harris that rushes (and picks up a sack). 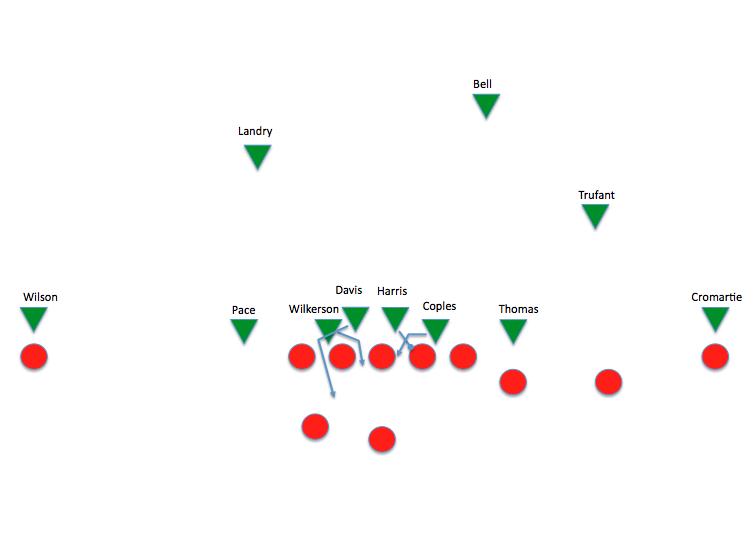 This formation, which uses 2-4-5 personnel in a 4-2-5 alignment, puts two designated pass rushers on the field (Pace and Bryan Thomas), but both drop into coverage. The four rushers - two three-technique linemen and two inside linebackers - run games inside, with Davis getting the pressure. This was covered in a teaser post in more depth. 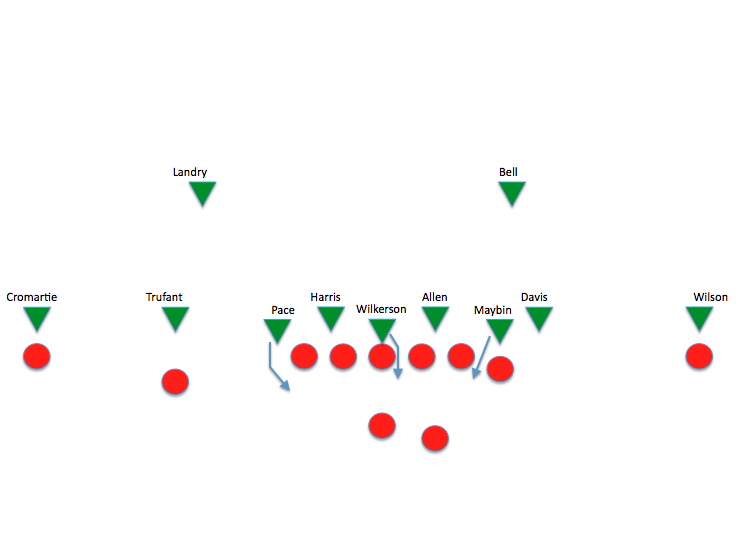 Wilkerson was a mainstay for the Jets, but they left him on the field as the sole lineman on several occasions, with six defensive backs (three of those safeties) and four linebackers (two inside 'backers, two edge rushers) on the field. Note that Antonio Allen, then a rookie safety (6'1", 210) picked in the seventh round, is lined up like an inside linebacker, crowding the line of scrimmage. Note also that cornerback Kyle Wilson is lined up where a safety may traditionally be. This is 1-4-6 personnel, but it's a 3-3-5 alignment.

One other quick note: that 1-4-6 dime didn't have a defender more than eight yards behind the line of scrimmage; it's an extremely aggressive alignment. When did the Jets employ it? As Brady and the Pats were trying to march down the field for a game-tying field goal late in the fourth quarter. Brady got the job done, but Pettine certainly wasn't in prevent mode.

We could go on for weeks looking at every variant of Pettine's nickel and dime defenses and only cover one or two games; trust me, there were many more personnel groupings and formations used in just one game against New England. Instead, let's boil these stills down to three themes, which can be applied to the philosophy of the defense:

"I think a cornerstone of the system is flexibility," says Pettine. "You have to have the ability to have guys play multiple positions and play multiple jobs if you want to confuse an offense. I think you have to have guys that can be a defensive end (or) an outside linebacker; a safety (or) an inside linebacker; a nickel (or) an outside corner or a safety. A big part of the NFL is identifying guys pre-snap, and we want to limit the amount of pre-snap information we're putting out to an offense. That's why we look for guys that have that type of versatility."

This, again, is just a taste of what Pettine does defensively. We'll have at least one more post on Pettine's defense coming up at some point in our re-watch series; I like the idea of charting where one defensive lineman (Wilkerson), one edge rusher (probably Pace), one middle linebacker and one safety lined up throughout an entire game to give you an idea of just how much these guys move around for Pettine.