A Buffalo-based unit of the National Guard named a base for former Bills offensive lineman Bob Kalsu during the Iraq War. Kalsu was killed in Vietnam in 1970.

In April of 2003, the 105th Military Police Company deployed to Iraq. The Army National Guard unit was sent in on the heels of the invasion of that country, and established a camp in May. That camp was named for Bob Kalsu, a former member of the Buffalo Bills who gave his life in Vietnam in 1970.

"Being from Buffalo, we named the camp after Bob Kalsu," Eric Ando, a Specialist at the time, told Buffalo Rumblings. "I don't know who suggested the name, but I was personally familiar with his story. I'm a big Bills fan and a history buff. I started watching the Bills in the mid '80s, so he was killed long before my time."

Forward Operating Base Kalsu was 20 miles south of Baghdad. Multiple attacks on the compound were made during the less than six months the Buffalo-based company was there. Mortar attacks like the one that killed Kalsu were common at the base named in his honor, and claimed two lives within the 105th Military Police Company.

"We had a very hard time there," continued Ando. "We faced over 200 insurgent attacks in less than six months. We had two soldiers killed in action: Sergeant Heath A. McMillan was killed July 27, 2003, and Specialist Michael L. Williams (on) October 17, 2003."

After 33 years, most outside of Buffalo and Kalsu's home state of Oklahoma probably don't know his story unless they've happened across the 1999 Emmy-nominated NFL Films production, or the 2001 Sports Illustrated cover story. The company made a sign explaining the name, which you can see in the picture that accompanies this article. 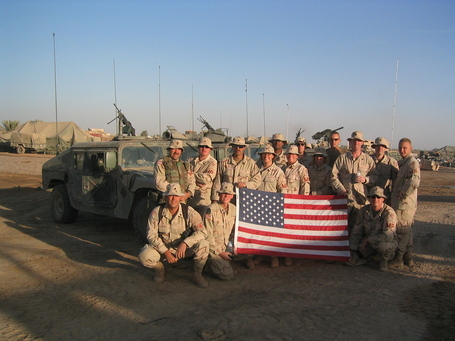 The 105th in November 2003, before pulling out of Iraq
Photo provided by Eric Ando

The base was turned over to the Iraqi government at the end of 2011 and closed. The final flag that the company flew over the base is pictured above. While Sando isn't sure if the flag ever made it to Kalsu's widow, he was quick to point out that one of the flags flown on the base named for a Bills legend was given to Kalsu's family.

"We were the ones who chose the name, and it's a very high honor," Ando said.