A week from today, we'll be going in-depth on how Mike Pettine tried to defend the New England Patriots in 2012. Here's a detailed sneak peek.

When I pinged the Buffalo Rumblings community on Thursday for ideas to use in our summer Buffalo Bills re-watch series, I mentioned that the first post in the series would be about the 2012 New York Jets, and how then-defensive coordinator Mike Pettine chose to defend Tom Brady and the New England Patriots.

I began the tape study for that post last night, but within the first five plays of the game I was sufficiently excited that I felt the need to give you a little teaser of the full post coming a week from today. I certainly had enough material.

This was the Jets' fifth defensive play of the game. It came on a 3rd & 9. New York had a thoroughly mediocre pair of pass rushing specialists on the field - Calvin Pace and Bryan Thomas - yet were able to generate the right kind of pressure on Brady, force his read and yield an easy incomplete pass. I tried to recall the Bills ever using a pressure package like this in recent seasons, and drew a blank. Hence this post.

New England came out with three receivers (Wes Welker, Brandon Lloyd and Deion Branch), a tight end (Aaron Hernandez) and a running back (Danny Woodhead). The Jets stayed in the nickel defense they'd been running the entire first series, making just one substitution: Thomas came onto the field for defensive lineman Mike DeVito. The Jets had therefore switched from 3-3-5 personnel to 2-4-5 personnel for the down.

Below, you can see the offensive and defensive alignments on the play, as well as the route combinations that Brady had dialed up for the occasion. Take particular note of the Jets' decision to put all of its linemen and linebackers on the line of scrimmage, to disguise where pressure may be coming from, and how many rushers there would be. Also take note that this decision left a gaping hole in the middle of the field, and the ultra-athletic Hernandez would be running right into it. 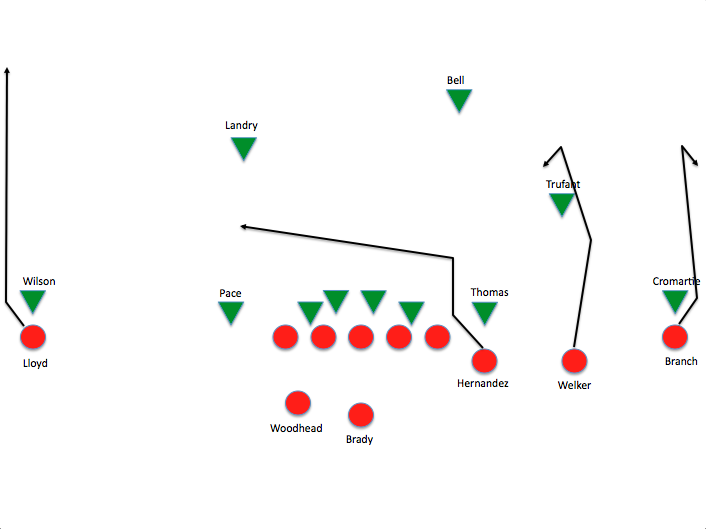 The defense of any passing play starts with pressure. The Jets would ultimately send four rushers on this play: both defensive linemen (Muhammad Wilkerson and Quinton Coples) and both inside linebackers (David Harris and Demario Davis). The two designated pass rushers, Pace and Thomas, drop back into coverage - though Pace is still a key to this play, which we'll go over in a moment.

A-gap pressure is the best way to stress Brady - the quicker you can get to the game's best passer, the better; even if you don't get home, you're disrupting the timing of the play. The latter is true in this case. As you can see below, Pettine dialed up a pressure package in which the two defensive linemen - both lined up in a three-technique, on the outside shoulder of the guard, before the snap - are slanting inside to pressure the A gaps, while the linebackers are crossing them to pressure the B gaps.

Harris precedes Coples, crashing into the right guard. Coples folds in behind, and the center slides to his right to pick the rookie up. Harris and Coples are handled for the moment, but it's created essentially a two-on-one situation on the left side of the offensive line. Wilkerson heads into the A gap, and the left guard - as he's supposed to - picks him up to keep Brady clean for as long as possible. Because the left tackle is far enough out of the picture - again, we'll get to that in a moment - Davis is left to essentially run free, with only diminutive running back Woodhead there to pick him up. Pettine's scheme has generated pressure on Brady, but don't call it a blitz: he's still got seven guys in coverage. 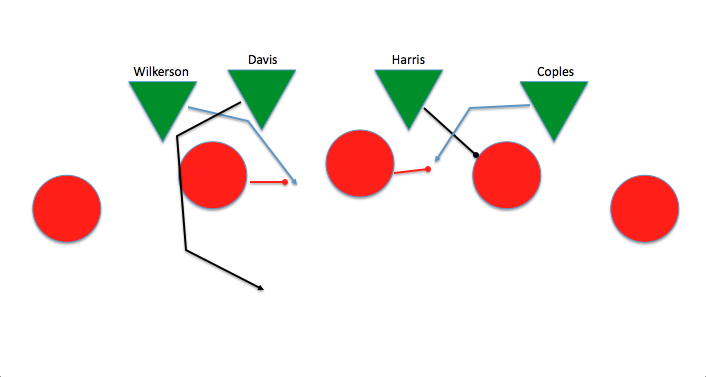 Because of the A-gap pressure look pre-snap, Brady is thinking about the middle of the field, where there will be some space to maneuver, and where Hernandez is headed. The Jets respond to that likelihood by dialing up a coverage that ultimately gives them three men on Hernandez: there will be a safety over the top of Hernandez regardless of the route he runs, and Thomas is in trail coverage. Pace gets into the fray, too, but that's mostly coincidental; his role is much more important when talking about the pressure.

Pace, aligned wide of the left tackle pre-snap, takes a step or two forward before dropping into a short zone coverage (and, as fortune would have it, right into an area of the field where Hernandez will be). That movement causes the left tackle to kick-slide out a step or two to pick Pace up, and as a result he can't get back in time to erase Davis, who creates the pressure on Brady. (Harris gets into the backfield, as well.)

Aside from the pressure package, the most aggressive part of this defense is that it left defenders in single coverage on the Patriots' three receivers. Welker has a one-on-one with a route run to the sticks against Isaiah Trufant; that's easy money. But Brady never gets a chance to progress back across the field to that matchup, because he's looking for Hernandez first, and the pressure doesn't give him time to look at a third option after seeing Lloyd in single coverage against Kyle Wilson. 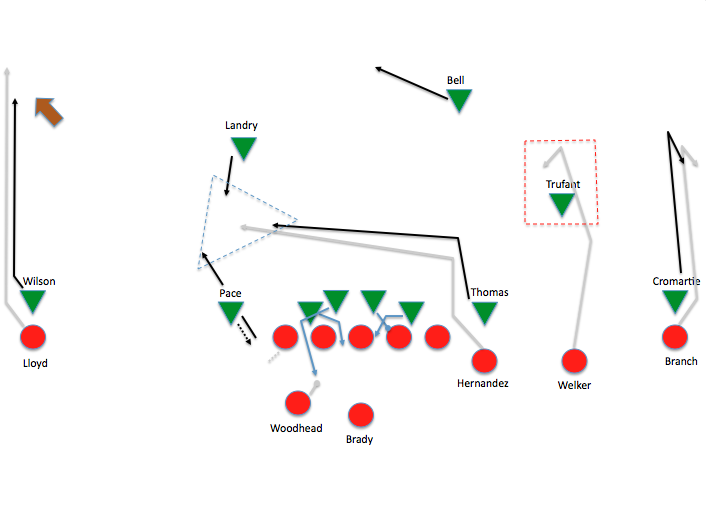 This ball flew yards past Lloyd - who was able to separate deep - for an incomplete pass, and the Patriots punted on the next play.

This was not brilliant scheme or play-calling on Pettine's part; it was sensible (A-gap pressure!), aggressive play-calling that forced Brady's reads. To beat Tom Brady, you have to win the proverbial chess match. Brady ultimately threw for 259 yards and two touchdowns in this game (I've yet to finish watching it), but this was one circumstance where a simple play call and alignment created opportunities for a defense that was overwhelmed from an individual talent standpoint.

There's your teaser for next Friday's post. It won't be this intricate next week - we'll have more volume than one play to cover, and I'm not going to make you suffer through posts with tens of thousands of words (nor suffer writing them) - but it sets the table for what is to come. We haven't even scratched the surface of the surface with this defense.