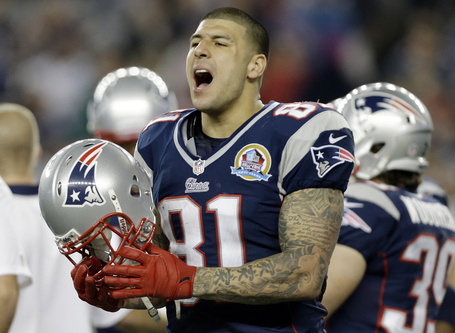 I got some free time coming up, so I decided to bring back the Morning Joe! series for the remainder of the off season. Like always, I have some interesting/controversial topics lined up that will hopefully garner some good discussion and add some life to the site during the worst part of the year.

So without further adieu lets get to today's Joe! shall we.

In the wake of the recent developments of the Aaron Hernandez murder charges, and his alleged shooting of a Florida man that apparently went unreported in this instant news world we live in. I started to wonder if there have been other cases involving NFL players this off season that went unreported or unnoticed. I also wanted to attempt to answer the question, "How can this happen"? So I did it a little digging and found this site called UT San Diego, which is basically a running police blotter for NFL players. But before you check it out, I wanted you to take a stab at the number of players that have had run-ins with the last since the Super Bowl in early February.

Have you guessed yet? I was thinking probably 10-12.

If you were thinking that as well, unfortunately you are wrong just like I was. Since the Ravens won the Super Bowl in early February, there have been 30 players that have had run-ins with the law. They range from drug possessions, DUI, assault, theft, and murder. So during the first 5 months of the "off season", this averages about 7 1/2 or 8 players per month that had some sort of run-in with the law, which is double the amount of incidents during a 6 month NFL season including the preseason (2 1/2 per month).

This brings me to the title of today's Joe! "How can this happen"? Many of you may wonder, how can you have all of this money and talent, and just throw it all way?

But before I attempt to answer this question; let me put a disclaimer out there.

1) I'm not speaking for everyone, just speaking from my experience and the environment that I grew up in.

2) I'm not justifying anyone's action. I firmly believe that we all should be responsible for our own actions, and at some point in life you have to take accountability.

3) All situations are different, and this will just be a general answer.

You have rich, talented, in some cases entitled-alpha dogs personalities that have been playing the game of football their whole lives, who are use to structure and discipline. In most cases, these athletes have been raised in rough conditions, single to no parent-drug infested homes, and relied on friends and maybe even gangs to provide the sense of family and love that they may have been lacking at home. Maybe the father was in and out of jail and their mothers on drugs. They may have had friends that took them in, they may have protected them, giving them money and food when they had nothing. These same friends that the media is quick to call "hang-arounders" or thugs, are the very same people that have been loyal and supportive to these players for years. In a lot of cases, these players feel that they owe their lives to these friends.

When you grow up in a community where you have a "star"; someone who has the talent to make it out of the harsh environment that is known as the ghetto, the community as a whole protects this individual and shields them for the harsh reality of life. There is hope that one day he or she can come back and make changes in the community and not forget those people who help "raise" him. That star or athlete feels a sense of indebtedness to his community to his friends, and that is when these "hang-arounders" are created. There is a since of loyalty to these friends, so they bring them along with them; give them money and cars, and introduces them to a life that they have never seen before.

The star hangs with friends who has nothing to lose and everything to gain. They aren't hindered by the NFL substance abuse policy or conduct policy. So the life that they thought they left behind, is actually the same life that follows them due to the loyalty to their friends. It's a very strange and unique relationship. The two sides need each other.

We all know that these guys have to leave these friends behind, but the code that they live by is a lot stronger than we realize.